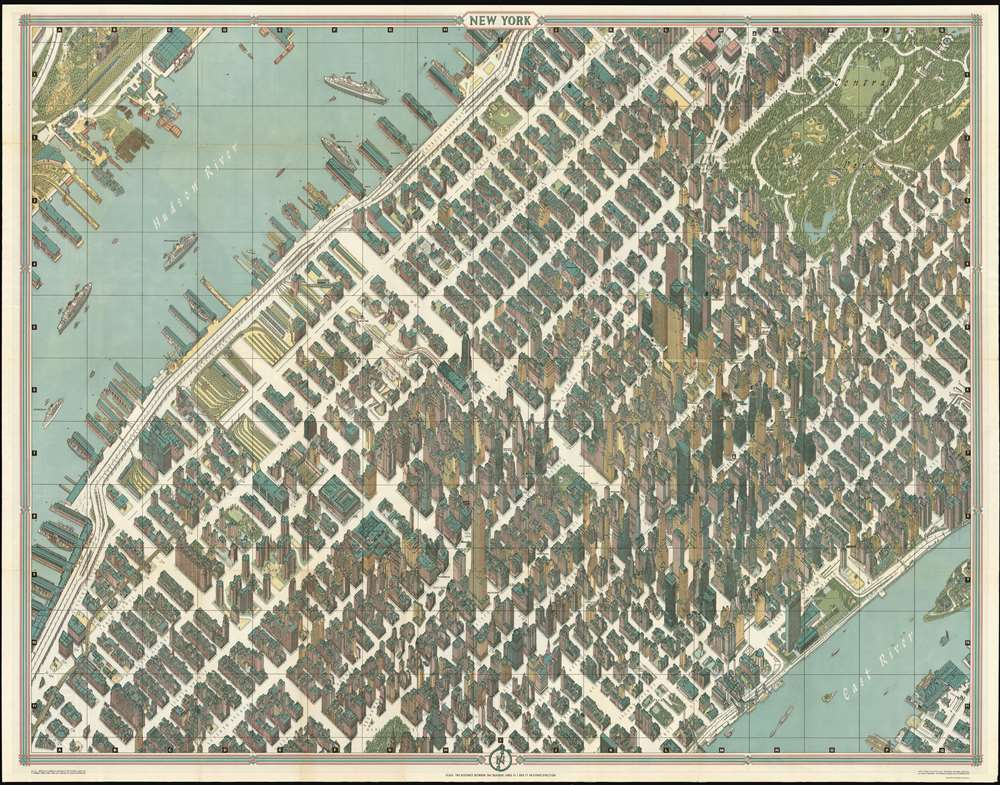 The high point of urban cartographic art - this is the 1962 Bollmann axonometric map of midtown Manhattan, in its first issue. This distinctive view presents the area at the stylistic peak of the skyscraper era: over half of the world's skyscrapers standing at the time appear within the bounds of this view.

Bollmann created an image of great, apparent precision by employing subtle distortion and exaggeration to emphasize scale and clarity. The entire work was first drawn by hand, and its preparation boasted the use of over 67,000 photographs, 17,000 of which were aerial. Bollmann widened the streets to keep the image uncluttered; his view dispenses with perspective to maintain a uniform scale for all the buildings and allow comparison of size. The result captures this mighty concentration of towers, presenting each with its uniquely recognizable profile: the iconic Empire State building, the graceful Art Deco curves of the Chrysler building, the sleek blade of the United Nations, and the ultra-modern helicopter pad of the Pan Am building. The verso of the map is a detailed map of the five boroughs; the map dates itself by the presence of New York International Airport, Idlewild Terminal. Both the 1963 and 1964 American-printed editions replace this verso map with a map of the subway system.

Bollmann printed this first edition of this view in Germany in 1962. In addition to the changed verso map, there are significant typographical differences between this and the two Barnes-printed American editions of the map, which were executed using a different stone. (The guidebook, oddly, was printed in New York and copyrighted 1963.) Both the 1963 and 1964 New York-printed editions, promoting the New York Worlds' Fair, employ a less subtle palette than this German edition. A further printing of this view, printed on one side in a smaller format and lacking a guidebook, was issued in the 1980s. Examples of these, in various editions, appear to be represented in institutional collections with varying degrees of precision in cataloguing.

Very good condition. Comes with original guide and pouch. Two mended junctures of folds and a few marginal mends, but no loss to the image.