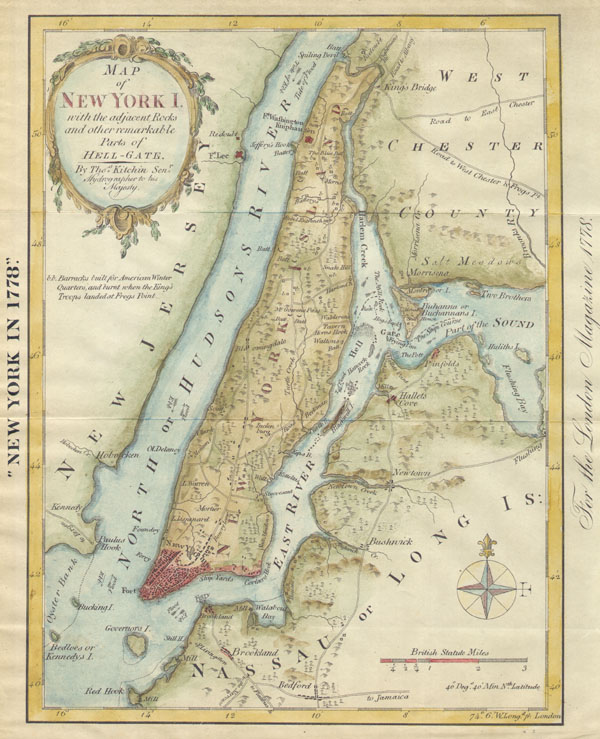 This is an unusual map of New York City in 1778, reduced and reprinted in 1869. The original map was drawn by Thomas Kitchin in his capacity as Hydrographer to His Majesty. It was originally published in The London Magazine. Features the full island of Manhattan with parts of Brooklyn, Queens, and Westchester. What is offered here is actually a c. 1869 reprint of the original, and much larger, 1778 map. Prepared for the 1869 edition of the Shannon's Manual of The Corporation Of The City of New York .

Napoleon Sarony (March 9, 1821 - November 9, 1896) was a dashingly handsome Canadian-American lithographer and publisher active in New York in the mid to late 19th century. Sarony was born in Quebec and emigrated to New York City in 1835. He apprenticed under Henry Robinson (fl. 1830/33 - 1850) before working as a lithograph artist for Nathaniel Currier (1813 - 1888). In 1846, he partnered with Currier's apprentice lithographer Henry B. Major to establish the firm of 'Sarony and Major.' From offices at 117 Futon Street, they published under this imprint until roughly 1853, when Sarony split off on his own under the imprint 'Sarony and Co.', still at 117 Fulton. At the time 'and Co.' probably meant Joseph Fairchild Knapp (1832 - 1891), Sarony's apprentice, and Richard C. Major, possibly Henry Major's son. In 1857, a new imprint was established as 'Sarony, Major and Knapp'. According to an advertisement in the New York Times (Feb 16, 1864), Sarony had invested in the business at founding, but was not an active partner, possibly because he was traveling in Europe. It is unclear why Sarony's name was maintained, possibly to capitalize on his fame, as a honorific, or possibly because he owned a major stake. They published under this imprint until 1863, becoming a major concern at 449 Broadway. Sarony's name was formally removed from the partnership in 1863. At the time he was traveling in Europe, mastering the most advanced color lithography and photographic techniques. He is known to have worked in France, Germany, and England. He returned to New York in the 1860s, establishing a photography company at 37 Union Square that became famous for its portraits of late-19th-century American theater icons. In 1891, Sarony, hoping to capitalize on Sarah Bernhardt's fame as 'Cleopatra', paid the stage actress 1,500 USD to sit for a photo session, the modern-day equivalent of 20,000 USD - suggesting a highly prosperous business. His son, Otto Sarony (1850–1903), continued the family business as a theater and film star photographer. As an aside, Sarony's second wife, Louie Sarony, was a known eccentric who would reportedly dress in elaborate rented costumes to walk around Washington Square each afternoon. Learn More...

Fine or perfect condition. Contemporary color. Original folds. Blank on verso.
Looking for a high-resolution scan of this?