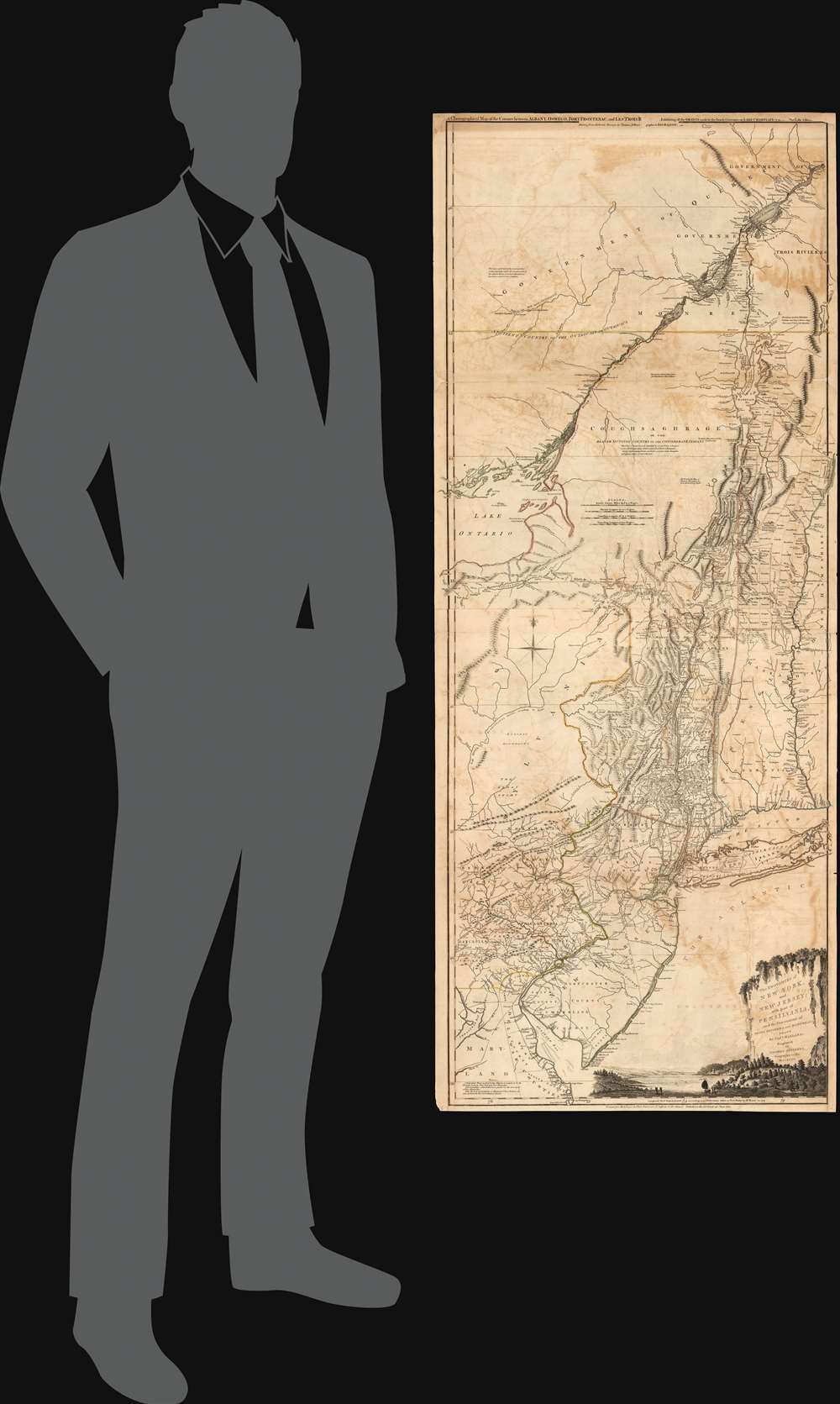 New York, New Jersey, and the Hudson Valley on the brink of the American Revolutionary War.
$4,750.00

The Provinces of NEW YORK, and NEW JERSEY; with part of PENSILVANIA, and the Governments of TROIS RIVIERES, and MONTREAL: drawn by Capt. Holland. / A Chorographical Map of the Country between Albany, Oswego, Fort Frontenac, and Les Trois Rivieres; Exhibiting all the Grants made by the French Governors on Lake Champlain; and between that Lake and Montreal.
1775 (dated)     53 x 21 in (134.62 x 53.34 cm)     1 : 633300

One of the most important, influential, and comprehensive American Revolutionary War Era maps of New York, New Jersey, Vermont, and the Hudson Valley corridor, this is an early 1775 edition of Capt. Samuel Holland and Thomas Jeffrey's Provinces of New York and New Jersey… Holland's map illustrates the important strategic and trade corridor between New York and Montreal, specifically detailing from Delaware Bay northward including parts of eastern Pennsylvania, New Jersey, Long Island, New York, Connecticut, Massachusetts and Vermont as well as the Iroquois League, the Trois Rivieres territories, and Montreal, as far as Lac St. Pierre in modern-day Quebec. In the lower right, a scenic cartouche illustrates the wide and easily navigable expanse of the Hudson River - surely an enticement to the region.

Holland completed the initial surveys for this map in 1767 and 1768 as part of his role as New York - New Jersey Boundary Commissioner. New York and New Jersey were at the time disputing their north-western border, particularly in the vicinity of Morris County (currently New Jersey). Holland was commissioned by the Board of Trade to produce a new survey elaborating on the points of contention. This resulted in a manuscript map (now lost) that was presented to the Board of Trade in 1768.

Thomas Jefferys, as Geographer to the King, was among the first to have access to Holland's map and would have had the right to use it without Holland's permission. As Powell suggests, it is likely that the 'Name of Capt. Holland is put, without his Knowledge or Consent.' Jefferys incorporated this valuable cartographic data into a new and expansive map that detailed not only the New York - New Jersey border region, but the entire Hudson Valley as far north as Montreal. In order to expand the map northward beyond the scope of Holland's surveys, Jefferys relied on the cartography established by Lewis Evans (Hudson Valley, Lake Ontario) and Cadwallader Colden (St. Lawrence region). The proto-Vermont land grants are also noted. There can be little doubt that Jefferys was aware of the anti-colonial sentiment brewing in the New England colonies and thus recognized the imminent need for a new, highly accurate, large scale map of what he correctly foresaw as the seat of the upcoming conflict.

The present map represents the second state of this important map. All states are uncommon, but the first two states, which are cartographically identical, are exceptional and rarely appear on the market. Here is a breakdown: The map was published in a variety of commercial and made-to-order atlases, as well as issued separately both in dissected and wall format. This map is becoming increasingly scarce on the market, but is well represented institutionally.

Samuel Holland (1728 - 1801) was a surveyor and cartographer of extraordinary skill and dedication. Holland was born in the Netherlands in 1728 and, at 17, joined the Dutch Army where he attained the rank of Lieutenant. Around 1754 Holland emigrated to England where he joined the newly forming Royal American Regiment. His skills as a cartographer and surveyor brought him to the attention of his superiors who offered him steady promotion. In 1760 he prepared an important survey of the St. Lawrence River system. It was during this survey that Holland met a young James Cook, who he mentored in the art of surveying. Cook, best known for his exploration of the Pacific, developed many of his own revolutionary nautical surveying techniques based the systems he learnt from Holland. In 1762 Holland caught the attention of the Commission of Trade and Plantations, who governed the British Crown Colonies in America. Under the umbrella of the Trade Commission Holland prepared surveys of the Hudson River Valley and other New York properties. In 1764 he was named Surveyor General for the Northern District, the position in which he did much of his most important work. Holland is also known for surveying done in an attempt to sort out the New York - New Jersey border conflict. Following his work in New York Holland relocated to Canada where, with his new wife of just 21 years, he sired seven children. Like many early surveyors working for colonial governments, Holland was poorly compensated and is known to have supplemented his income by selling the results of his surveys, and those of other surveyors to which he had privileged access, to private publishers, among them the London firm of Laurie and Whittle, who published his work under the pseudonym of 'Captain N. Holland.' Samuel Holland died in Quebec in 1801. Learn More...

Good. Some marginal repairs and fill especially along top border where there is some loss to the secondary title. Verso reinforcements at folds, few surface mends.