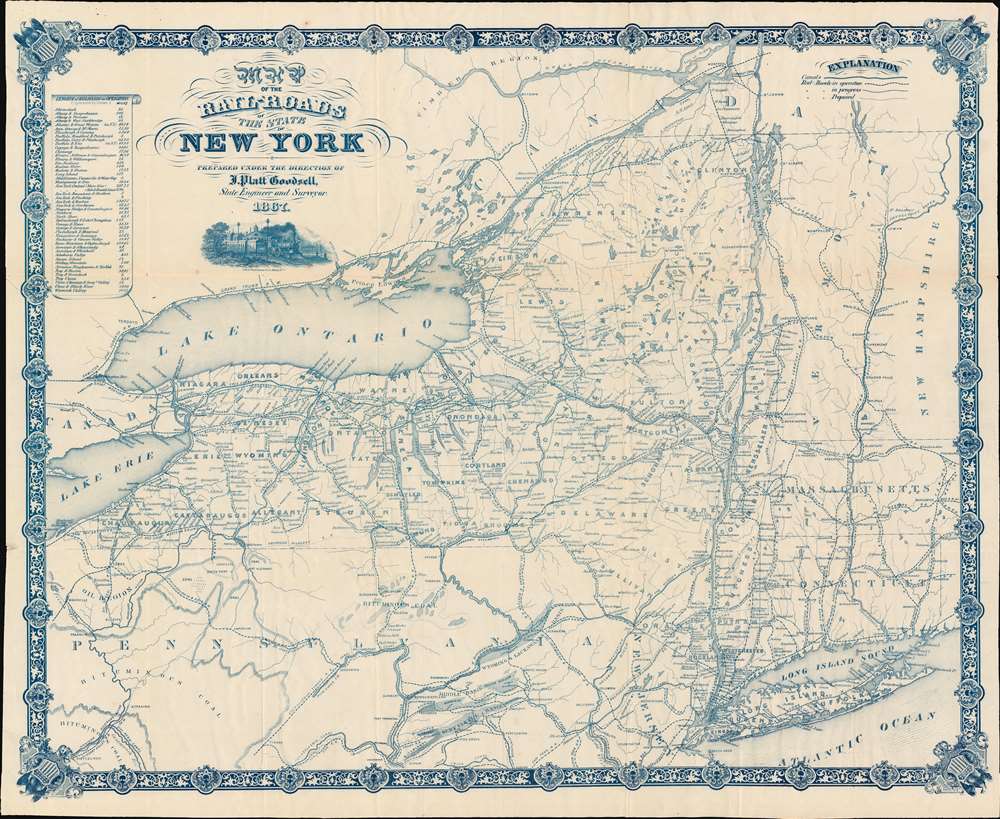 A striking, cyan-toned railroad map of New York State issued in 1867 by Jonas Platt Goodsell. The map offers expansive coverage of New York, as well as some of the adjacent states, including all of Vermont, western Massachusetts and Connecticut, and northern Pennsylvania. This map was issued in Godsell's final year as State Engineer and Surveyor, and indeed the final year of his life.

The railroad system came to New York early, with some companies operating as early as the 1820s. Nonetheless, most of these focused on the Hudson Valley and westward towards coal reserves in Pennsylvania. The state mountains interior, including the Catskills and Adirondack Mountains, however proved a long-term challenge for railroad development. Nonetheless, by 1867, when this map was issued, a network of railroads and canals began to penetrate the state, reaching the Finger Lakes, ports on Lake Ontario, and Syracuse, and Buffalo.

This map was engraved and printed by Weed, Parsons and Company for J. Platt Goodsell in 1867. We are aware of only one other example, in the collections of the Adirondack Experience Library in Blue Mountain Lake, New York.

Jonas Platt Goodsell (1819 - November 22, 1869) was an American politician and civil engineer. Born in Utica, New York, Goodsell attended the Utica Academy. From 1840 until 1842 Goodsell undertook survey work for the expansion of the Erie Canal. He moved to Mobile, Alabama in 1842 to improve his health, and lived in Mobile until 1844. In 1846, Goodsell was appointed Second Assistant Engineer of the State Canals in New York, then served as Resident Engineer in Albany from 1850 until 1853. He was Chief Engineer of the Cape Fear and Deep River Railroad in North Carolina from 1853 until 1856, when was named Division Engineer for the Eastern Division of New York State Canals. He then served as Division Engineer for the Middle Division from 1862 until 1866. He served as Surpervisor of the Town of Utica from 1863 until 1864. He was elected State Engineer and Surveyor in 1865 as a Republican and held the position in 1866 and 1867. He died of pneumonia on November 22, 1867. He married Lavinia Maria Smith on November 27, 1845. Learn More...


Weed, Parsons and Company (July 25, 1843 - July, 1892) was a New York based printing house based in Albany, active in the second half of the 19th century. The firm was founded by J. B. Weed (???? - June 18, 1851) and John D. Parsons. Weed, the son of Thurlow Weed, previously worked for the Evening Journal. Parsons was a compositor in the printing offices of Packard and Van Benthuysen. Shortly after their startup, the firm received financing from Visscher Ten Eyck, one of the owners of the Evening Journal to dramatically expand their printing operation. Leveraging Parsons' contacts with the state, the firm began receiving lucrative government printing contracts out of Albany. By 1868 they were one of the largest printing concerns in the United States. Their offices were gutted by a major fire on April 7, 1871. The owners rebuilt with new more modern equipment and continued to operate, with heirs taking over the shares of the original owners. They remained in operation until the firm went into receivership in July of 1892. Learn More...