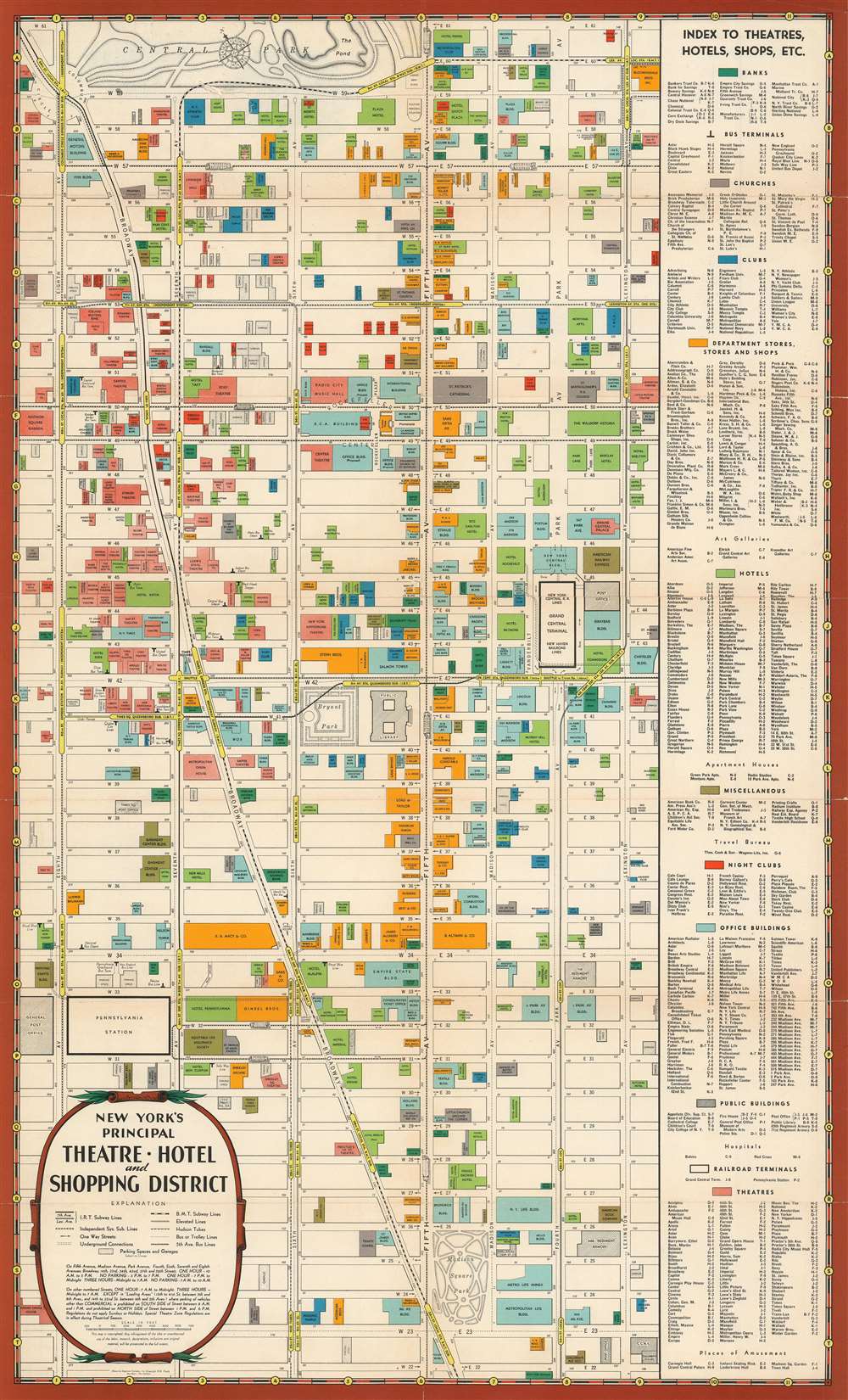 This is a 1939 First Edition Hagstrom / R. W. Floyd map of Midtown Manhattan highlighting the Theatre District and its many theatres. The map depicts the city from Eighth Avenue to Lexington Avenue and from West 61st Street, Central Park, and East 61st Street to 22nd Street. Although numerous buildings are illustrated, not all the city blocks are filled. Banks, churches, clubs, department stores, hotels, nightclubs, office buildings, public buildings, train stations, and theatres are shaded using various colors to allow for easy differentiation and identification. An index, situated along the map's right side, lists the identified locations, offers a color-coding key, and notes each building's coordinates on the map.

The Manhattan Theatre District comprises a section of Manhattan along Broadway between, roughly, 38th and 54th Streets, Eight Avenue and Fifth Avenue. The area first began attracting theaters and restaurants following Metropolitan Opera's 1883 relocation to the, then remote, West 39th Street and Broadway. Oscar Hammerstein followed in 1899, opening the Victoria Theatre on 42nd Street. The area soon became a center for nightlife, especially after the tramways connected the area in 1899, and the subway in 1904. Over the decades since, the district has been referred to by New Yorkers as 'The Rialto,' as 'The Main Stem,' and as.'Broadway,' and at the turn of the 20th century, was simply 'The Street.' While continuing to be a theater destination, the area became run-down in the 1970s, the center of the city's seely x-rated scene. The area began a revival in the 1980s that continues to this day.

Other New York City landmarks that fall within the map's borders include the Empire State Building, the central branch of the New York Public Library, the Museum of Modern Arts (MoMA), Bryant Park, Grand Central Station, and Herald Square. Both Macy's and Bloomingdale's are labeled, as are the Waldorf Astoria Hotel and the Plaza Hotel.

This map was originally designed for the created the Hagstrom Company by R. W. Floyd. It was copyrighted on March 18, 1939, but went through multiple subsequent editions, all of which are undated. The 1939 first edition, as here, 1939, is notable for bearing Floyd's imprint. Subsequent editions starting in 1940 remove the imprint.


Robert Wentworth Floyd (August 12, 1879 - 19??) was a New York mapmaker of Quaker descent active in the middle part of the 20th century. Floyd was born in Boston, the son of Colonel Robert Mitchell Floyd (18?? - 1912). In 1898, he traveled to Nicaragua with a plan to become a coffee grower, but this apparently did not pan out, as he was in New York from about 1901. Maps of New York City, mostly intended for tourists, begin appearing under his name in copyright entries as early as 1933 and as late as 1940. Around 1939, his work was acquired by Andrew Gunnar Hagstrom, who began publishing under his own imprint, by 1940, Floyd had disappeared entirely. Learn More...