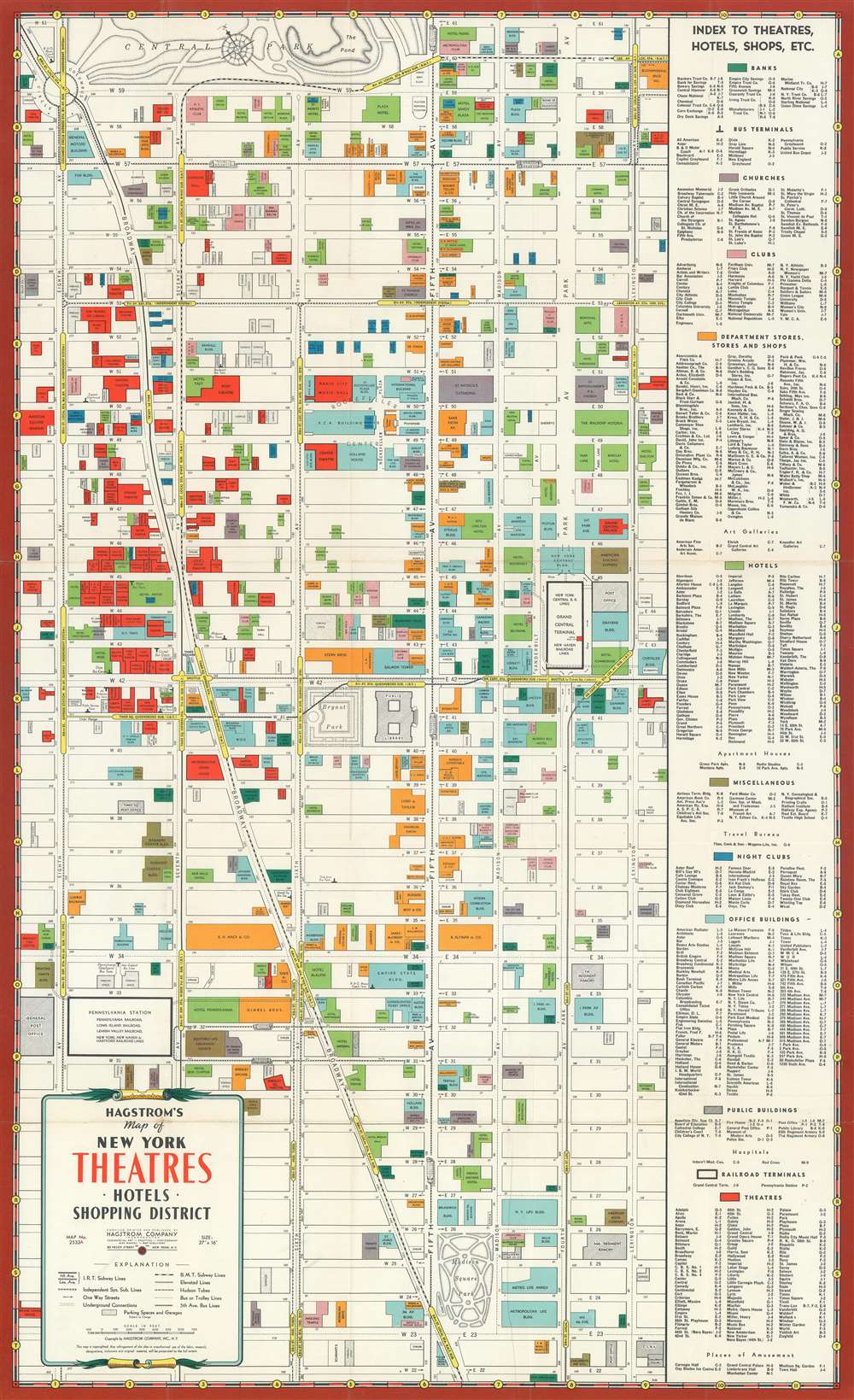 This is a c. 1940 Hagstrom map of Midtown Manhattan highlighting the Theatre District and its many theatres. The map depicts the city from Eighth Avenue to Lexington Avenue and from West 61st Street, Central Park, and East 61st Street to 22nd Street. Although myriad buildings are illustrated, not all the city blocks are filled. Banks, churches, clubs, department stores, hotels, nightclubs, office buildings, public buildings, train stations, and theatres are shaded using various colors to allow for easy differentiation and identification. The focus, of course, is on the areas many theatres, which are shaded red. Numerous theatres still in operation today are labeled here, including the New Amsterdam, Lyric, Majestic, Broadhurst, Booth, Golden, Barrymore, and the Music Box. Numerous others illustrated here have since been closed or repurposed. Other New York City landmarks that fall within the map's borders include the Empire State Building, the central branch of the New York Public Library, the Museum of Modern Arts (MoMA), Bryant Park, Grand Central Station, and Herald Square. Both Macy's and Bloomingdale's are labeled, as are the Waldorf Astoria Hotel and the Plaza Hotel. An index, situated along the map's right side, lists the identified locations, provides the color with which they are shaded, and each building's location on the map's grid. Streets and avenues are also labeled and subway lines are illustrated and labeled as well.

This map was created by the Hagstrom Company and published c. 1940.

Andrew Gunnar Hagstrom (1890 - September 24, 1977) was a map publisher based in Maspeth, Queens. Hagstrom was a Swedish immigrant who came to new York in 1909 where took work milking cows at a farm near Coney Island, Brooklyn. He then worked in the meat packing industry while taking a degree in commercial art at the New York Mechanics Institute. Afterwords he founded a drafting business in Manhattan, creating a map to illustrate his drafting skill help customers locate his shop. His map proved popular and he expanded operations, founding the Hagstrom Map Company (1916 - 1968) and issuing additional maps of various parts of New York City and the surrounding regions. By 1949 Hagstrom had issued more than 150 maps, guides, and atlases, most of which focused on New York. Hagstrom pioneered a cartographic style that exaggerated street size to increase clarity and create additional room for large print readable labeling. Even the New York Subway system hired Hagstrom to produce its map, which was in use from the 1940s to 1958. Hagstrom died in 1977, at the age of 81. Hagstrom was knighted by the King of Sweden. His company flourished until 1968 when it was acquired by Macmillan. The brand has since passed through multiple corporate portfolios and is currently the property by Kappa Publishing Group.