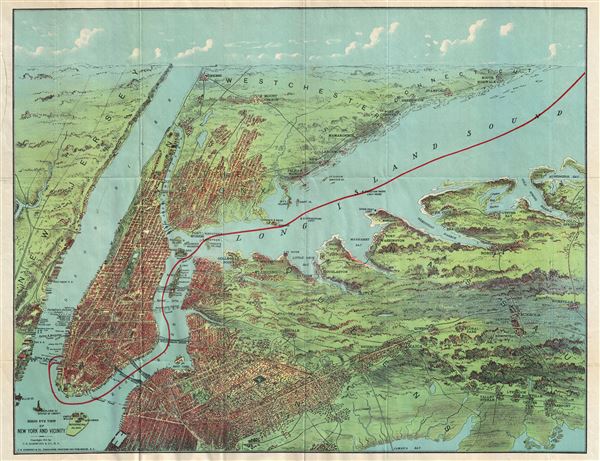 An exceptionally scarce 1912 chromolithograph C. S. Hammond and Company map and view of New York City and vicinity. The view extends from Ellis Island to Huntington Bay and from Yonkers to Jamaica Bay, covering thus all of Manhattan, Brooklyn, Queens, the Bronx, and adjacent parts of New Jersey, Westchester, Connecticut, and Nassau County (Long Island). Red tinting and identifiable buildings identify more developed parts of the city, including most of Manhattan, Brooklyn, and parts of the Bronx. Major buildings and monuments such as the Statue of Liberty, the Brooklyn Naval Yard, East River bridges, Penn Station, Grand Central Station, City Hall, and Central Park, among others, are rendered I profile. The view's most salient feature is the undulating red line extending from Long Island Sound to the Hudson Driver Docs of the Fall River Line and the Maine S.S. Company. There are at least three variants on this view including the first edition issued in 1909 and another monochrome version issued in 1925. All examples are extremely scarce with only three or four examples being cited in institutional collections.