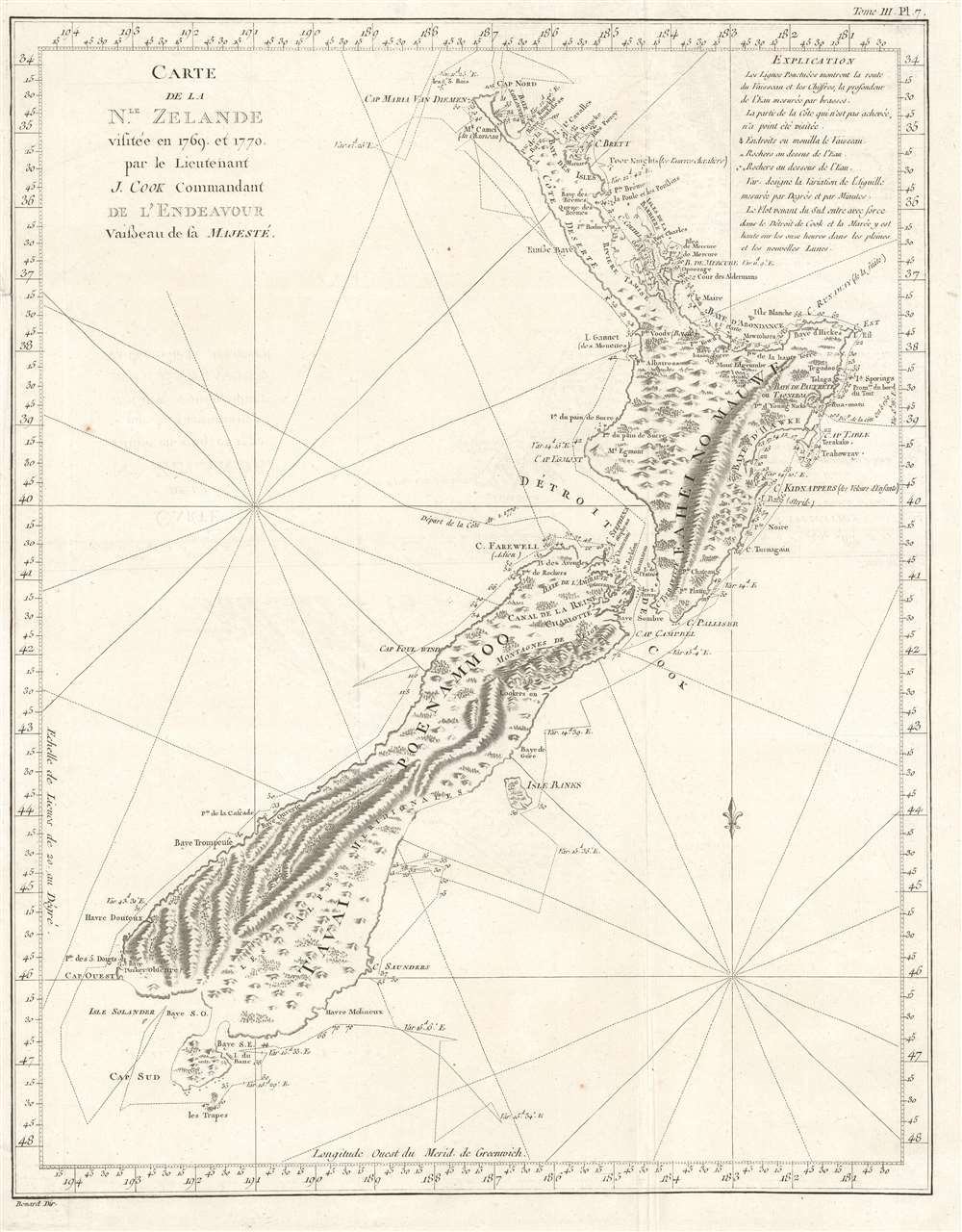 Considered to be the most important map of New Zealand, it was created by Captain Cook in the 1770s and consulted into the twentieth century.

Recognized as the most important map in the history of New Zealand, this is the first French edition of Captain James Cook's landmark map of New Zealand. The first map to prove that New Zealand is composed of two islands, Cook's course through what is still known as Cook's Strait separating the two islands, is depicted as well.

Cook undertook the surveys used to create this work during his first voyage in 1769 and 1770, making him and his crew the first Europeans to visit the islands since they were discovered by Dutch explorer Abel Tasman in the early 1640s. Cook's map is also the first to detail the coastline of both islands and labels their points, bays, and capes. The mountainous interior topography as it was perceived from Cook's ship and the shore is also illustrated. The course of Cook's ship, the HMS Endeavor, is traced as well, with dates, depth soundings, and compass headings noted. Many of the place names Cook bestowed upon the islands remain to this day, including Mount Egmont, the Bay of Plenty, Hawke's Bay, the Bay of Islands, and the Bay of Kidnappers.

The Chart in Cook's Words

Of the chart itself, Cook wrote in his journals:

The Chart which I have drawn will best point out the figure and extent of these Islands…beginning at Cape Palliser and proceed round Aehei no mouwe (North Island) by the East Cape etc. The coast between these two capes I believe to be laid down pretty accurate both in its figure and the course and distance from point to point. The opportunities I had and the methods I made use on to obtain these requesit4es were such as could hardly admit of an error…some few places however must be excepted and these are very doubtful…

Cook's achievement in mapping New Zealand established the value of the islands as potential colony and point of greater interest for the British.

After Cook returned to England from this voyage, he brought with him over 300 manuscript maps and charts. Isaac Smith (1752 - 1831), a draftsman who worked with Cook and was a member of the Endeavor's crew, had a hand in drawing this map. It was first printed in John Hawkesworth's An Account of the Voyages undertaken by the order of His Present Majesty for making Discoveries in the Southern Hemisphere…, which was the first official account of Cook's first voyage and was supported by the British Admiralty. This work not only recounted Cook's explorations, but also those of Wallis, Carteret, and Byron, who also explored the Pacific in the 1760s. The present example was engraved by Robert Bénard (1734 - 1785) and published in the French version of Hawkesworth's book, entitled Relation des voyages entrepris par order de sa Majestie Britannique… published by Saillant and Nyon and Panckoucke in 1774. Impressively, the British Hydrographic Office began reprinting this chart for their vessels beginning in 1816 and it was consulted by mariners well into the twentieth century, lending it incredible longevity. Because of its accuracy and the complexity of the task, it is considered to be one of Cook's best maps. The OCLC records examples as being part of the collections at Princeton, the University of Auckland, the National Library of New Zealand, the Museum of New Zealand, and the National Library of Australia.