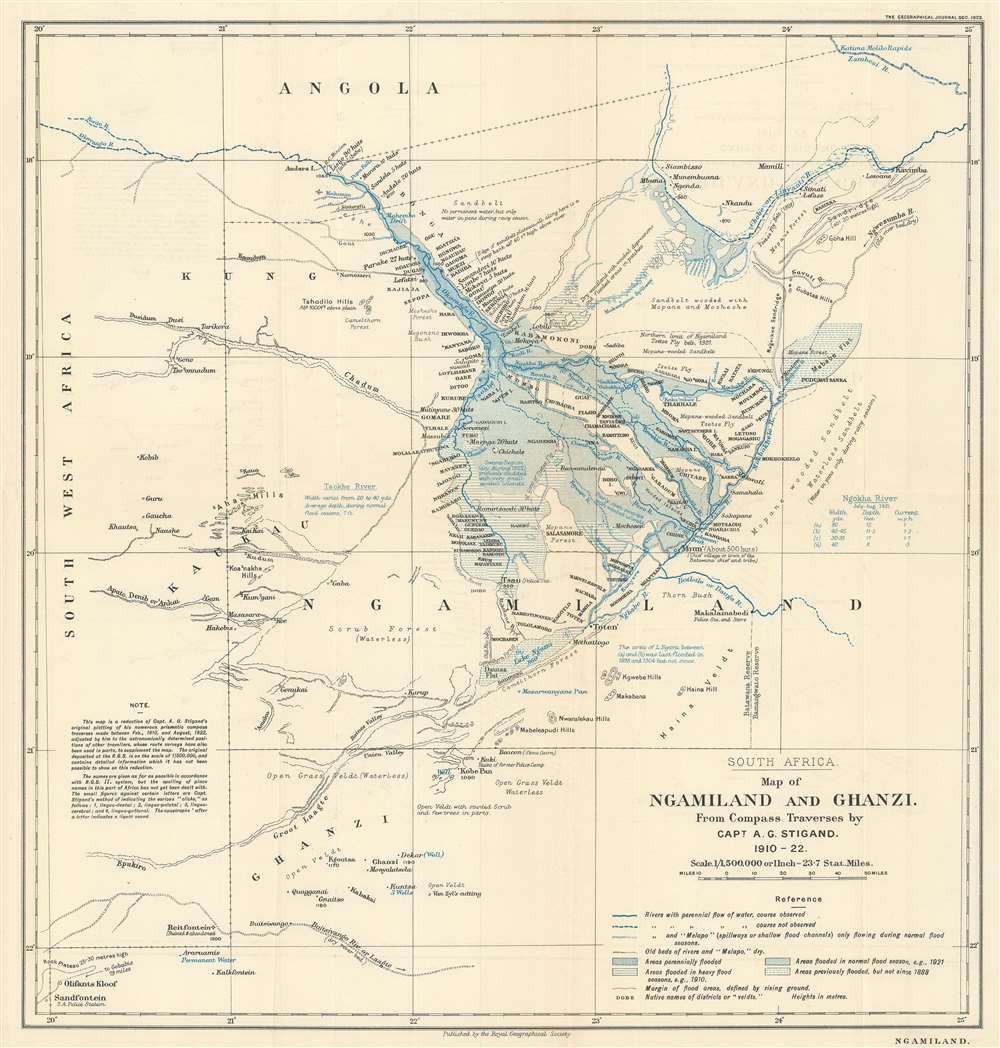 The first detailed mapping of the Okavango Delta, a Natural Wonder of Africa and a UNESCO World Heritage Site.

Recognized as one of the most significant maps of the region, this is the influential 1923 Almar Gordon Stigand map of Ngamiland or North-West District and Ghanzi, Botswana, including the world-famous Okavango Delta. Created after nearly ten years of surveying, Stigand's map contains more detail than any previously published, including those of the Livingstone era. Even Stigand believed in the importance of his work. In the article published in the Geographical Journal, he stated that

This paper has been written as an adjunct to the writer's sketch-map - the results of numerous journeys by land and water in Ngamiland during the last thirteen years - rather than the map being supplementary to the paper.

Regarding the level of detail, villages, islands, rivers, and streams are labeled, all in Sechwana, the native language. Stigand also includes notes concerning landscape, flooding tendencies, and water levels.

The Okavango Delta, one of the largest inland deltas in the world, covers between 2,300 and 5,800 square miles and is produced by seasonal flooding. Moremi Game Reserve, a protected area in Botswana, covers the eastern and central parts of the Delta. The Delta is famous for safaris, as it is home to over 400 bird species and nearly all major mammal species, including elephants, lions, and rhinoceros. Named one of the Seven Natural Wonders of Africa in 2013, the Delta became the 1000th location inscribed on the UNESCO World Heritage Site list in 2014.

This map is a reduction of Stigland's manuscript map and was published by the Royal Geographical Society in the December 1923 edition of The Geographical Journal. One example is cataloged in OCLC and is part of the collection at the University of Oxford.

Almar Gordon Stigand (1876 - February 26, 1956) was a British soldier and colonial civil servant. Educated at the famous public school in Rugby, Warwickshire, Stigand served in the police force of the Cape Colony from 1896 - 1898. He then entered the colonial civil service of Bechuanaland. He was first posted in Mafikeng and was on active service during the Anglo-Boer War protecting that town. He was transferred to Gaberone in 1902 and became acting assistant civil commissioner there in 1904. He served as the Resident Magistrate of Ngamiland from 1910 - 1914 when he left his post to serve in the British Army. While Resident Magistrate, Stigand explored and mapped much of the Okavango Delta, as well as the Ngamiland and Ghanzi regions, all by compass traverse. He soon became an authority on the region's geography and published several papers on the subject. Stigand participated in the campaign in German South West Africa (modern-day Namibia) in 1914 - 1915, and in March 1916, he arrived in England and was posted to the West Kent Regiment. He also served as a member of the British Military Mission to Rome. Some scholars view his 1923 Geographical Journal article as 'non-professional,' while others see the accompanying map as '[belonging] to a new era of professionalism' and it became a leading example of mapping in the province. His most crucial cartographic work was a two-sheet 'Sketch map of Ngamiland and Ghanzi' published by the Geographical Section of the British General Staff in 1925 when he was serving as Resident Magistrate of Molepolole. Learn More...