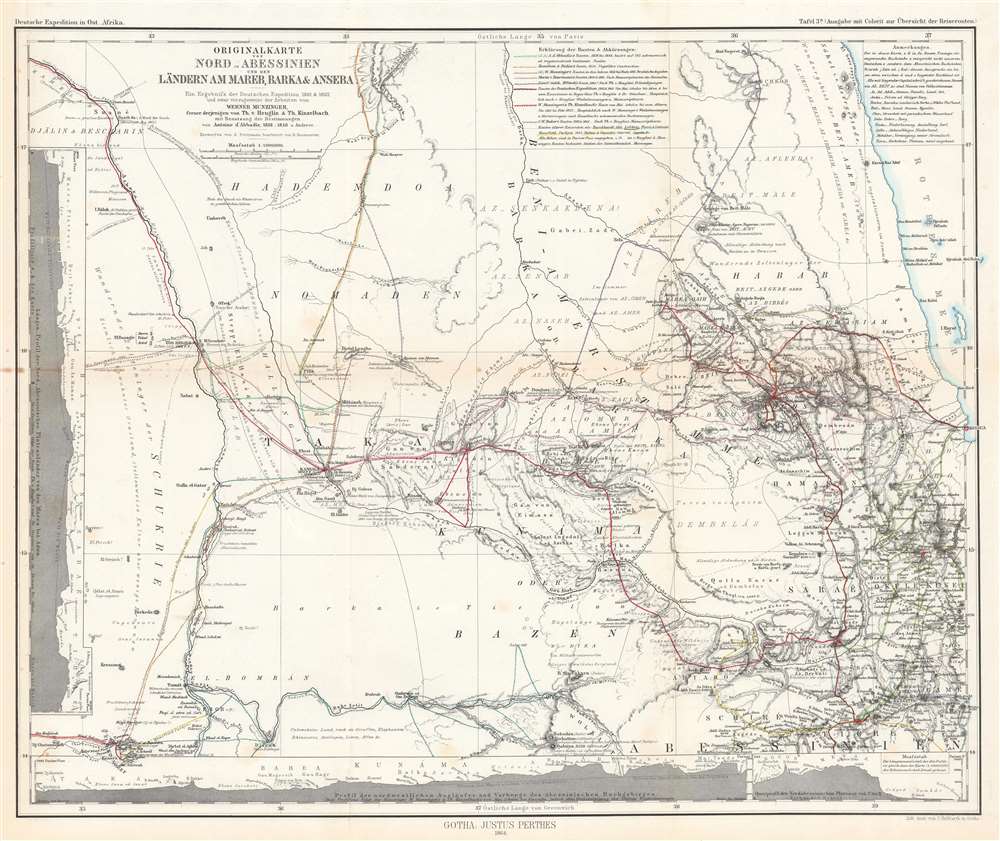 This is an 1864 Augustus map of East Africa. Depicting the region from the Red Sea and Mitsiwa (Massua), Eritrea west to Sudan, the routes of nine explorers though this region are traced. Spanning nearly twenty years, from 1838 to 1862, hand color highlights each route in a different color, allowing for easy differentiation and identification. Two of Werner Munzinger's expeditions through the region are illustrated, making his exploits the most thoroughly cataloged here.

Werner Munzinger (April 4, 1832 - November 14, 1875) was a Swiss administrator and explorer in the Horn of Africa. Born in Olten, Switzerland, Munzinger attended the University of Bern, Munich University, and the Sorbonne before moving to Cairo in 1852. After a year mastering Arabic, Munzinger entered a French mercantile house and participated in trading expeditions to the Red Sea. In 1865, he became the manager of the British Massawa consulate on the Ethiopian border, but, after the 1868 British invasion of Ethiopia, he remained in Massawa and became the French consul. In July 1870, after a failed attempt to broker the French annexation of Massawa, Munzinger left French service to explore the southern Arabian Peninsula. Not long after, he became the governor of the Keren region and Massawa, this time in service to the Egyptian government. Ultimatley, Minzinger was killed in battle during the 1875 Egyptian attack on Ethiopia.

This map was created by Augustus Petermann, edited by Bruno Hassenstein, and published by Justus Perthes in Die Deutsche Expedition in Ost-Afrika, 1861 und 1862 in 1864. Four examples of the separate map are cataloged in OCLC and are part of the institutional collections at The British Library, the Bibliothèque nationale de France, the St. Gallen Bibliotheknetz in St. Galler, Switzerland, and the Bavarian State Library in Munich.