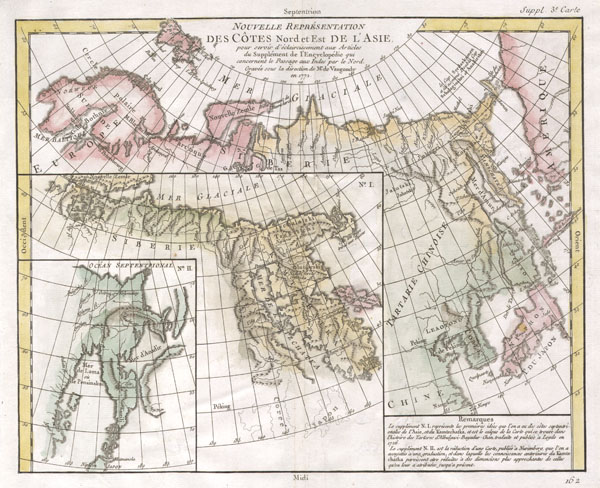 This is the Vaugondy map of Siberia, Kamchatka and the northeastern extremes of the Asian continent. The map is the third of the ten which Vaugondy supplied for Diderot's Encyclopédie. This seminal map series, exploring the mapping of North America, Asia, and specifically the Northwest and Northeast Passages, was one of the first studies in comparative cartography. As the map's title suggests, this one was intended to clarify the articles in the Encyclopédie that pertained to European efforts to discover a viable northeast passage to the East Indies. The Northeast Passage, much like America's Northwest Passage, was a long sought after sea route through the Arctic that would save European merchantman the expense of rounding Africa in order to access the trade riches of East Asia.

This is a comparative map; the main map shows what was at that time the state of the art cartography of the region, largely derived from J. N. De l'Isle and Philippe Buache. It notes the location of Peking (Beijing) and a relatively accurate depiction of the Korean Peninsula. Japan is shown, with Nagasaki, Osaka and Iedo (Tokyo) labeled. Interesting features include an insular Iesso north of Japan, separated from the mainland by a 'Strait of Tessoy' roughly corresponding to the Strait of Tartary. Thus Iesso here can be understood as an early depiction of Sakahlin Island; the Kuril Islands are marked and named as well. Part of the northwest coast of North America is shown, separated from Asia by a strait in which appears the island of Puchochotski, here spelled Puchochotsks.

The Mysterious Island of Puchochotski

This is a crescent shaped island shown here in the strait between Asia and America. It was mapped on only a few obscure Russian manuscripts in the second decade of the 18th century, and was probably derived from the discoveries of Petr Popov, who was sent from Anadyrsk to the Chukchi Peninsula in 1711 to reconnoiter and negotiate with the Chukchi Tribes. Popov returned with indigenous reports of a large island one day's voyage east of the Peninsula - without question representing Chukchi knowledge of the Behring Strait and Alaska - marking this as one of the earliest published maps to illustrate Alaska based upon experiential knowledge.

Both of the inset maps shown here are ultimately derived from the work of the Swedish officer, linguist, cartographer and hard-luck-case Philipp Johann von Strahlenberg, whose Russian captivity resulted in the earliest accurate mapping of Siberia and Russian Tartary. Inset No. I is credited to the map of the Tatar Empire appearing in the Histoire genéalogique des Tatars issued by Leyden publisher Kallewier in 1726: both the map and the genealogical history were in fact plagiarized from Strahlenberg's work, stolen in 1715. Inset No. II is copied from the 1725 map of Nuremberg mapmaker J.B. Homann, whose source for his cartography is traced to the 1718 map which Strahlenberg produced to replace the work stolen in 1715. (Indeed, this and Homann's map represent our only glimpse of Strahlenberg's 1718 map, which is also lost.)

contrasting sharply in each of these three maps is the depiction of the Chuchki Peninsula, variously spelled 'Tchutski,' 'Tzchalatzki,' and 'Tzuktschi.' This first shows up in Strahlenberg's lost 1715 map (as shown in inset No. I) reappears in a revised form in his lost 1718 map (as shown in inset No. II.) The main map retains the peninsula, in still another form adopted by De l'Isle.

This map is part of the 10 map series prepared by Vaugondy for the Supplement to Diderot's Encyclopédie, of which this is plate 3. We are aware of two states of this map: a second includes the page number 162. A fully re-engraved plate dated 1779 with the imprint of Livorno engraver Spadaccini is also known. The present example, with page number, corresponds to the second state. The Supplément à l'Encyclopédie is well represented in institutional collections. We see two examples of this state of the separate map catalogued in OCLC.

Pedley, Mary Sponberg. Bel et Utile: The Work of the Robert de Vaugondy Family of Mapmakers. 402.
Looking for a high-resolution scan of this?