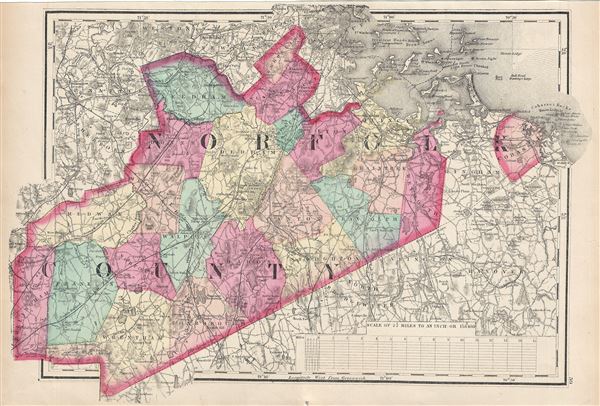 This is a fine example of Walling and Gray's 1871 map of Norfolk County, Massachusetts. It covers the entire county along with parts of neighboring counties. The city of Boston is highly detailed. Needham, Brookline, Dover, Dedham, Milton, Quincy, Braintree, Weymouth, Randolph, Canton, Stoughton, Sharon, Foxborough, Wrentham, Bellingham, Franklin, Norfolk, Walpole, Medway, Medfield, Cohasset, Hyde Park, and West Roxbury (which until 1874 was part of Norfolk) are highlighted in vivid pastels. There is appealing detail throughout with roads, towns, lakes and railroad lines clearly represented and elevation is shown by hachure. This map was published as plate no. 59 in the 1871 edition of Walling and Gray's Official Topographical Atlas of Massachusetts.