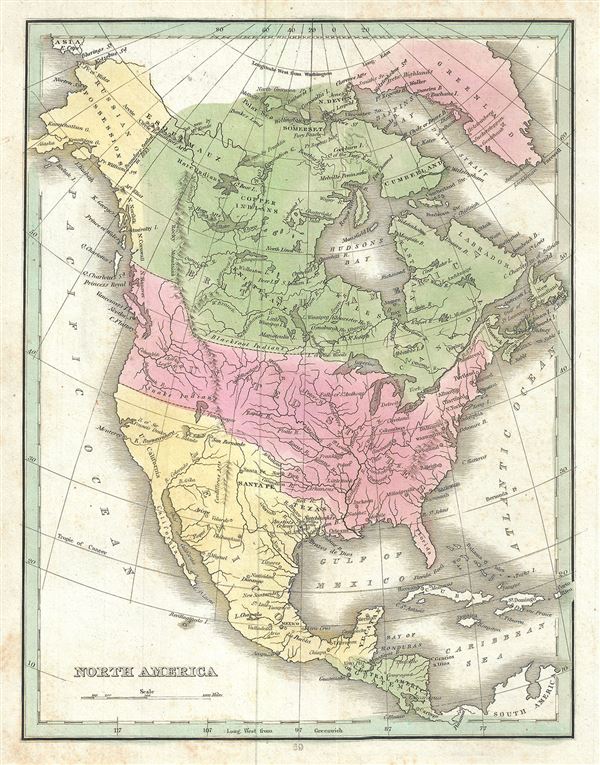 This is a beautiful example of the 1835 map of North America by the important American mapmaker T. G. Bradford. Bradford's map covers the entire North American continent from the Arctic Circle to the Isthmus of Panama, embracing all of Central America, Mexico, the United States, modern day Canada, and Alaska. It offers fine detail throughout with elevation rendered by hachure and political regions demarcated with color coding. Notes American Indian tribes including the Blackfoot Indians, Copper Indians, Hare Indians, Snake Indians and others. The map also identifies the Bay of Sir Francis Drake or Drake's Bay, the place where Sir Francis Drake was believed to have landed during his 1579 circumnavigation. Alaska is noted as a Russian Possession, as it was during the time. Austin's Colony in modern day Texas is also noted.

As this map predates the Mexican American War and the annexation of Texas, Upper California and Texas are not yet part of the United States. Shows the United States' claim of British Columbia as far north as 54 40.' In the first half of the 19th century the Pacific Northwest was the last frontier in the century's long slaughter of the American beaver in the name of European fashion. Both the British, in the name of the Hudson Bay Company, and the Americans, championed by John Jacob Astor's Pacific Fur Company, were eager to claim monopolistic right over the region. Astor's establishment of Fort Astoria on the Columbia River only served to further tensions with the Northwest Company - the Pacific subsidiary of the Hudson Bay Company. The dispute escalated, giving rise to the Oregon Boundary Dispute and the American expansionist slogan 'Fifty-four Forty or Fight!.' The dispute was not resolved until the 1846 Oregon Treaty which, through concessions on both sides, formally set the boundary at the 49th parallel.

Bradford also maps the apocryphal Buenaventura River running from the Rocky Mountains westward through 'Salt Lake' and westward to San Francisco Bay. The Buenaventura is the last incarnation of the apocryphal River of the West, a long sought after speculative alternative to the Northwest Passage. The mapping of Buenaventura here again references legitimate discoveries by Escalante of the White River and the Sevier River, mistakenly associated with the River of the West and given an erroneous outlet into San Francisco Bay.

This map is particularly interesting as it is one of the earliest maps to accurately depict the Northwest Passage, predating the Robert McClure expedition by more than 15 years. Bradford correctly maps what are today called the Northwestern Passages between Baffin Bay and the Arctic Ocean. His mapping extends as far west as Melville Island and Banks Island, though does not include Prince Patrick Island. Even so, beyond Melville and Banks Islands, there is little but ice and seasonally open sea as far as Alaska and the Bearing Straits.

This map was published as plate no. 69 in Thomas G. Bradford's 1835 Comprehensive Atlas Geographical, Historical and Commercial.  Bradford's atlas, published in 1835 was an important work on many levels.  First, it was one of the first American atlases to follow an encyclopedic format, offering readers extensive geographical and statistical tables to supplement the maps themselves.  Second, it was published in Boston and influenced the city's rise as a publishing center later in the 19th century (at the time most publishing in the United States was restricted to New York and Philadelphia).  Third, this atlas was the first to contain a separate and specific map showing the Republic of Texas.  Fourth and finally, Bradford's atlas in some instances broke the Euro-centric mold regarding atlas production.  Among other things, Bradford focused his atlas on the Americas and abandoned the classical decoration common in European atlases in favor of a more informational and inherently American approach.