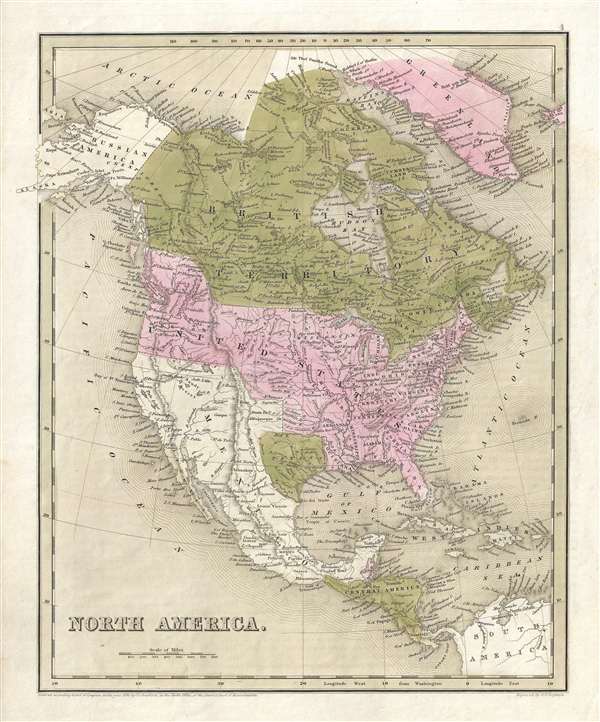 Ephemeral map of North America showing Texas as a Republic and the 54 40 dispute.

This Bradford 1841 map of North America includes the United States, British Territory (Canada), Russian America (Alaska), Mexico, and Texas as a Republic. Central America, the West Indies, and Greenland are also labeled. This map has several intriguing qualities. One is that Texas is depicted as the Republic of Texas, which existed from 1836 to 1846.

The Republic of Texas came into existence after Texas declared independence from Mexico, because the Texans believed that the Mexican government was no longer following the constitution. Following the Texan victory at San Jacinto, and surrender treaties were signed, Texas claimed the Rio Grande River as their southern border. These treaties were never ratified by Mexico and the Mexicans disputed the southern border, stating that it was not the Rio Grande, but the Nueces River that created the boundary between the two nations. Intermittent hostilities continued until Texas was admitted into the United States in 1846. The U.S. inherited the border dispute, which had not been satisfied, and the dispute became one of the reasons for the Mexican-American War. Both the Rio Grande and Nueces Rivers are labeled on this map, and the coloring of Texas and Mexico clearly shows the fluidity of the border situation.

Another intriguing attribute of this map is that the Pacific Northwest border of the United States is not depicted at the 49th parallel, which is the contemporary border between the United States and Canada, but rather at the parallel 5440' north, which was the border with Russian America and well into modern day British Columbia. The Oregon Question was disputed for decades between the United States and Great Britain. The basis for the dispute was mostly economic. The fur trade in the Pacific Northwest at this point in history was booming, which meant that both British and American companies and citizens wanted access to this area. American interest also came back to the concept of Manifest Destiny and the Westward Expansion. Although the border was set at the 49th parallel by 1846, the crisis was not fully resolved until 1872. It is apparent that this map was produced in the United States because American territory (shaded in pink) extends to the parallel 5440' north.

This map was engraved by George Washington Boynton for publication in Thomas G. Bradford’s 1841 edition of A General Atlas of the World. This map is dated and copyrighted 1838, but based on our knowledge of the publication history of Bradford's atlas, it is most likely the 1841 edition.

Bradford, T.G., A General Atlas of the World, with a Separate Map of each of The United States of America, 1841.