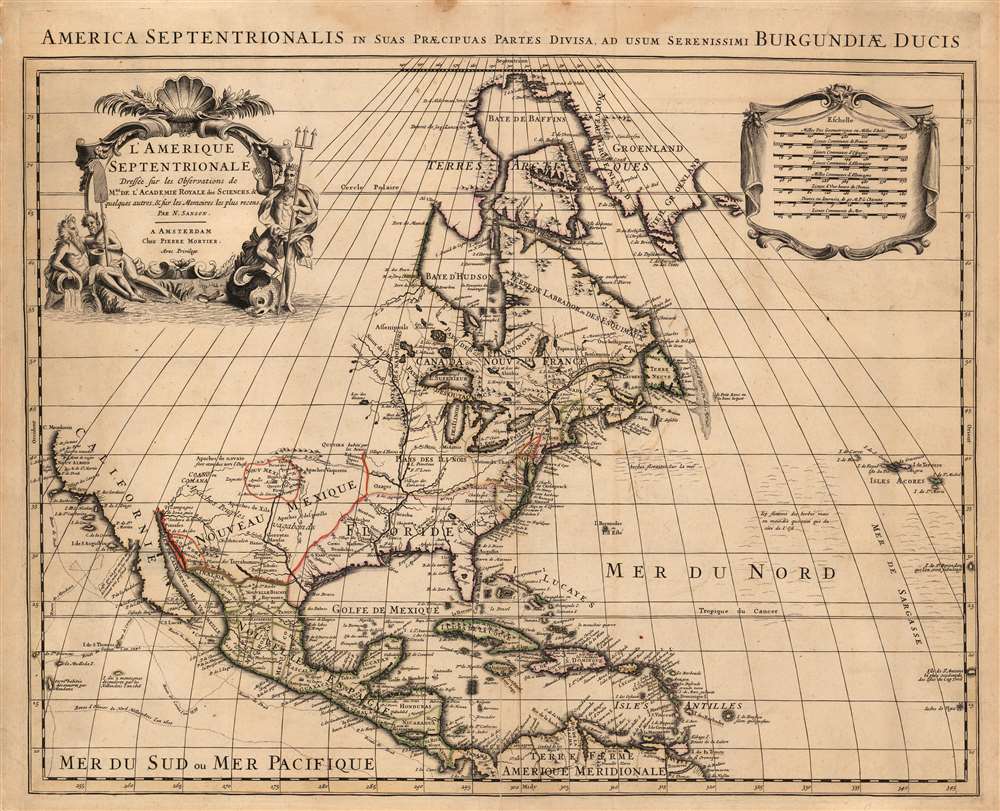 An extraordinary map, this is Peter Mortier's 1708 edition of De L'Isle's foundational 1700 mapping of North America. De l'Isle's map was the first to begin correcting the California-as-an-island myth, however tentatively. The map embraces the continent of North America from Baffin's Bay southwards as far as the Spanish Main, westwards to Cape Mendocino, and eastwards to include the Azores and the Sargasso Sea. Cartographically this map is faithful to the De L'Isle, differing mainly in the positioning of the title cartouche and the mileage scales.

A Cautious Reassessment of California

This map is the first to retreat from the 17th century canard presenting California as an island. True to form, the punctilious De l'Isle leaves the Pacific coast blank beyond Cape Mendocino, and he does not complete the coastline at the northern terminus of the Gulf of California. Thus, in the absence of direct evidence of the coastlines, De l'Isle makes no pronouncement: a more scientifically sound approach than the majority of the maps of this region from the preceding century. De l'Isle himself explained that he preferred not draw premature conclusions on a subject which, as yet, was still quite uncertain, 'therefore I have made California neither an Island nor a part of the Continent, and I will stay with this point of view until I have seen something more positive than I have seen to date.' On the west coast of California a false bay is shown, with the French notation 'Gulf of which nothing has yet been discovered but the moderns believe to be very deep.' It is not clear which 'moderns' De l'Isle had in mind, although De Fer's maps showed a bay at this latitude nearly bisecting the island of California.

The Mississippi Valley is well developed and based upon the most advanced French information available at the time. The forts of St. Louis and Bon Secours are noted, as is the settlement of d'Iberville at Bilochy. The Great Lakes are beautifully drawn, largely following the Coronelli model. The concentration of French power in the region is evident with forts at Tadousac, Quebec, Sorel, Montreal, and Frontenac identified.

While De l'Isle was scientific and cautious in his expression of geographical detail, he was not so circumspect in his political statements. His delineations of the borders between French and English territories in the lands east of the Mississippi make it clear that De l'Isle considered England's empire in North America to be almost entirely a coastal one, confining the English colonies to a narrow strip of land east of the Alleghenies, and limited to the River and Fort of Kinibeki (Kennebec) at their northern border. Nevertheless Boston, Nantucket, Long Island, Manhattan, New Jersey, Pennsylvania, Jamestown, Roanoke, Charlestown, and St. Augustine are identified along the eastern seaboard.

At sea there are a couple of elements of note. This is the first printed mapping of the Sargasso Sea, here identified as the 'Mer de Sargasse' where Icy flottent des herbes mais en moindre quantité. Along the Mexican and California coastline the routes of various navigators including Olivier, Cortez, Gaetan, Mendonza, and Francis Drake are delineated.

Just to the east of Barbados, in the Antilles, a curious apocryphal island appears with the label 'I. de Fonseca selon Quelquesuns.' This island, which is here surrounded by dangerous rocks and reefs, appears in several maps of the region as early as Hondius' Americae Novissima Descriptio where it is identified as Y. de S. B. This island was also identified by M. Rochette with the label Galissioniere's Rock. Other ships, including the Rainbow, claim to have seen the island as late as 1822. De L'Isle was the first to give the map a definite name, Fonseca. Even so, with so few sightings it disappeared from most maps issued in the 18th century. There is some speculation that discolored water occasionally discharged by the nearby Orinoco River led to various false sightings of land.

A baffling feature of this map is its attribution, in the cartouche, to Nicolas Sanson - who had died in 1667, and whose geography for this region had been obsolete twenty years prior to De l'Isle's 1700 map. Sanson's known maps of North America resembled this one not at all. Sanson was, in his day, a towering geographical authority, and his reputation was such that Peter Mortier's 1708 atlas (in which the present map was included) would be titled Atlas nouveau de diverses cartes choisies des Meilleurs geographes comme Sanson: 'New atlas of various maps chosen by the best geographers like Sanson' (emphasis ours.) It is possible that one of Mortier's engravers added Sanson's name inadvertently. Other examples of this map appearing in the same atlas present De l'Isle's name correctly. On the other hand, at the same time as this map was published another Amsterdam publisher, Renard, was selling De l'Isle's map under his imprint and it is possible that Mortier used the spurious Sanson imprint in an effort to sneak this map past his competitor. Whatever the reason might be for Sanson's name to appear on this map, its presence has long confused map scholarship: for example, Philip Lee Phillips's catalogue of the Lowery Collection lists this map (WL 145) under Sanson, while acknowledging its later printing ascribed to De l'Isle in a later Covens and Mortier imprint.

This map was engraved for Peter Mortier for inclusion in his 1708 Atlas Nouveau. It is one of the earliest derivatives of De l'Isle's 1700 original, which would be copied by Renard, Covens and Mortier, Schenk, Probst, and Ottens, as late as 1757. We see perhaps ten examples of this map with the De l'Isle imprint in institutional collections, but none with the spurious Sanson attribution. Despite this, we have seen examples come on the market from time to time.