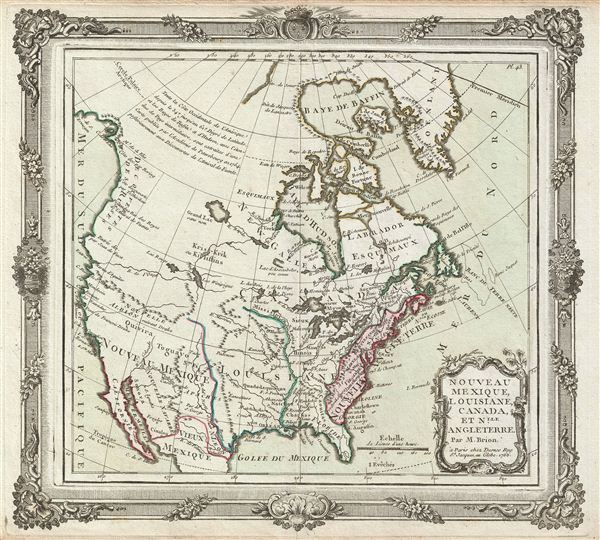 Shows mythical River of the West.

An appealing first edition issue of Brion de la Tour and Loius Charles Desnos' 1766 map of North America. Depicts North America according to the French conception with hopeful speculative river passages extending west from Hudson Bay towards Lake Winnepeg then along the mythical 'R. de L'Ouest' to the Pacific at the 'entree de Martin d'Aguilar' (likely the entrance to Columbia River). The main body of the map is divided into three sections, Nouveau Mexique, extending west of the Rio Grande, Louisiana between the Rio Grande, and the pre-Revolutionary period english Colonies along the eastern Seaboard. Nouveau Mexique includes the mythical kingdoms of gold, Quiviara and Toguayo (Teguyao), as well as more accurate indications for American Indian Tribes, missions, and riverways. Louisiana is divided into two regions, Floride, which contains all of the territory between the Appalachian Mountains and the Mississippi, and Louisiana proper extending westward to the Rio Grande (Rio Bravo), well into territory formally Claimed by Spain. The english Colonies (Nouvelle Angleterre) are relegated to a narrow region along the Atlantic coast bounded on the west by the Appellation Mountains and completely excluded from access to the Great Lakes – a clear case of carto-advocacy for French dominance of the Fur trade in this region. Features Brion De la Tour's elaborate rococo border work and title cartouche. The earliest variant on this map was published in 1866 and varied only in that 'Nlle. Angleterre' was replaced with 'etats-Unis' in later editions. Prepared by Brion de la tour and published in Louis Charles Desnos' 'Geographie Moderne, Historique et Politique.'