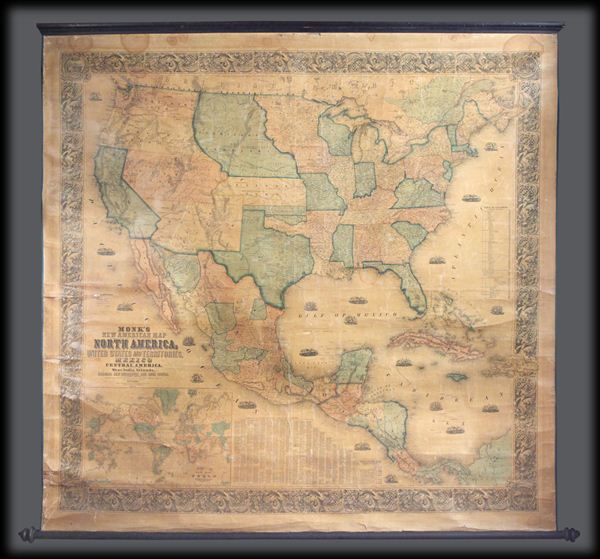 One of the most interesting and attractive 19th century wall maps of North America. Published in 1855 by Jacob Monk, this large and beautiful wall map, details much of North America from the southern border of Canada to Central America, the West Indies, and the northwestern parts of South America. Details the United States in full as well as parts of modern day Canada. Shows North America during an important period of territorial and cultural expansion following the Mexican-American war and during height of the California Gold Rush.

The California Gold Region around Sacramento, nestled between the Sierra Nevada's and the Coastal Ranges, is noted. Despite Monk's mention of the Gold Region it remains surprisingly inaccurate. Monk places Auburn well north of Sacramento between Marysville and Yuba City. Shows the western territories as they existed at the time with New Mexico extending from California to Texas, Utah reaching from California to Kansas, and Washington and Oregon extending eastward to Nebraska Territory. Nebraska Territory itself is shown at its fullest extent from Kansas to the border with British America (Canada). Oklahoma is divided up among three American Indian Nations, the Chah-Lah-Kee, the Muscogee, and the Chah-Ta. Also names numerous other American Indian tribes throughout. Shows several wagon routes and proposed railroads, as well as springs, mountain passes, forests, swamps, and deserts. Attempts to illustrate the shipping lanes along both the east and west coasts with numerous vignettes showing sailing ships. A large inset map in the lower left quadrant shows the world on a Mercator Projection. To the right of this is a chart detailing the towns and counties of the United States. Surrounded by an elaborate decorative border with a flora motif and decorative corner vignettes – a major upgrade over earlier editions.

This is the fourth state of Monk's map which was first published in 1854. All in all an extremely beautiful and interesting wall map of North America. This is the kind of map that can stand up to lengthy perusal.

Jacob Monk (August 25, 1805 - October 8, 1893) was a Baltimore and Philadelphia based American publisher of wall, pocket, and case format maps active in the mid-19th century. Monk was born in Stoughton, Massachusetts. It is not clear when he moved to Philadelphia, but he was active there from about 1850, when he began a lucrative publishing career. He married New Yorker Charlotte M. French (Monk) (1823 - 1903), around 1851. He is also the founder, in 1856, of the Mount Vernon Cemetery. Sometime in the 1860s, Monk acquired some 44 acres of land on the Schuylkill River, just outside of Philadelphia, setting himself up as a gentleman farmer. Learn More...

Good condition. Generally speaking this map is in great condition for a large unrestored wall map. No major stains or discolorations, no missing zones, and minimal crackling and whitening. Some tape repairs to edges. Partial restoration with contemporary edging. A great opportunity to own a Monk map with out the need to invest thousands of dollars in restoration, however, would also be an excellent candidate for restoration and should yield remarkable results.