1848 S.D.U.K. Map of North America showing Texas at its largest 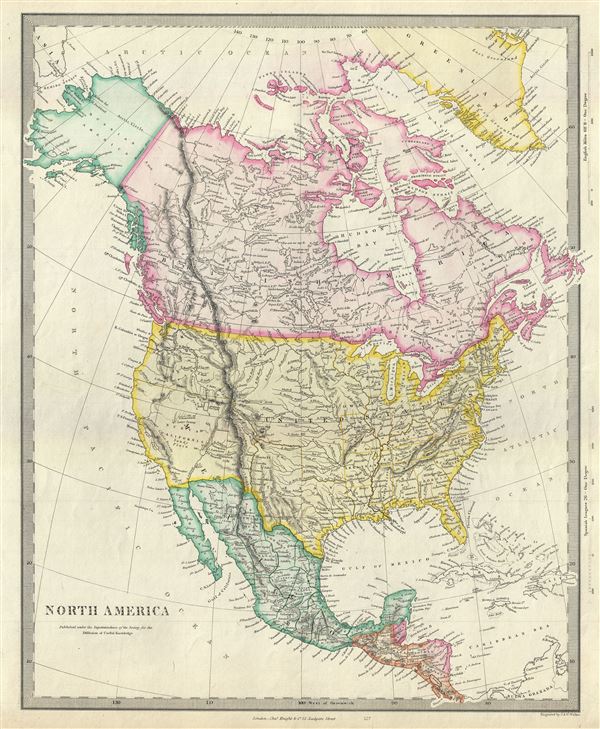 1848 S.D.U.K. Map of North America showing Texas at its largest

An uncommon 1848 full color edition of the S.D.U.K map of North America. The map covers all of the United States, Canada, Russian America (Alaska) and Mexico shortly following the Mexican American War (1846-1848) and the Treaty of Guadalupe Hidalgo. The 1848 treaty, which formally ended the war, annexed all Mexican territory north of the Gila and Rio Grande Rivers, including the short lived Republic of Texas, to the United States, increasing the country's size by about 35%. This map thus details highly ephemeral period before 1849 Gold Rush and the territorial reconfigurations that followed in the wake of America's great westward expansion. Texas is shown in its grandest incarnation, extending north as far as the Arkansas River and west as far as the Rio Grande (or Rio de Norte), inclusive of much of modern day New Mexico, Colorado, and Kansas. A number of additional elements are of some interest, including the identification of the Astoria trading post on Oregon's Columbia River and an exceptionally narrow Lake Michigan. Published in 1848 by Charles Knight of 22 Ludgate Street for the Society for the Diffusion of Useful Knowledge, or S.D.U.K. This was most likely the last edition of the S.D.U.K. atlas to be published before the society formally closed its doors. However, it is known that subsequent reissues of the S.D.U.K. atlas were printed well into the 1870s by Chapman and Hall, who acquired the original plates.