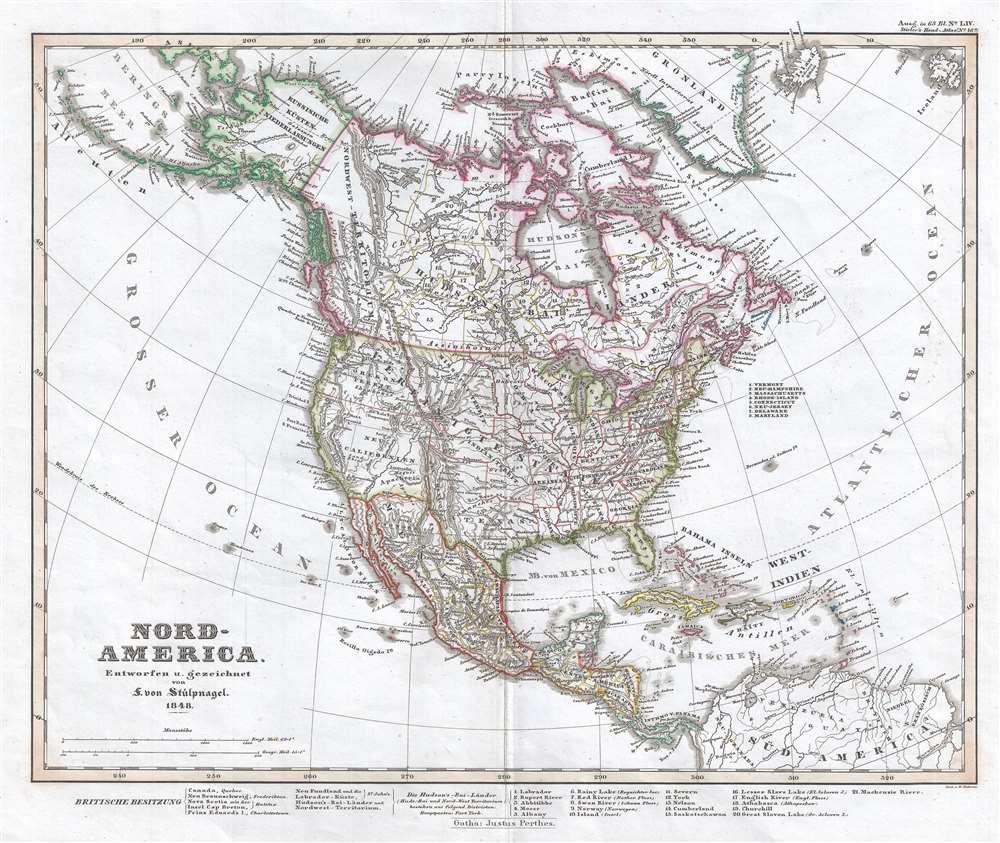 Dates from just after the Mexican-American War and just before the California Gold Rush and illustrates Texas at its fullest.
$450.00

This is an 1848 Adolf Stieler map of North America just after the Mexican-American War and near the beginning of the California Gold Rush. It also features a depiction of Texas at its largest, with boundaries extending westward well into modern day New Mexico and north along the Colorado River into modern day Wyoming. This configuration existed only briefly after Texas's 1845 annexation and the end of the Mexican-American War (1846 - 1848). The map illustrates the continent from the Pacific Ocean to Ireland and from the Arctic Ocean and Greenland to northern South America. Created at a pivotal moment in the history of the United States, the most intriguing part of this map is its informative cartographic representation of the American West. The borders of the areas labeled Wisconsin, Iowa, Indian Territory, Missouri Territory, and Oregon Territory are speculative at best, and, to a modern eye, hint at a lack of information. However, even with the inaccuracies with regard to territorial borders and names, numerous forts, rivers, towns, and physical features are labeled throughout the region, and the continent as a whole, giving the map an air of unimpeachable certainty. New California is labeled in the southwestern portion of the United States, as it had not yet been broken into smaller territories. All of the eastern states are labeled, along with their capitals, except for the smaller New England states, which are identified numerically and correspond to a key off to their right in the Atlantic Ocean. Indian tribes are referenced throughout, from the Arctic Ocean to Mexico. Twenty-one locations in Canada are identified by number and correspond with a key along the bottom border.

This map was created by Adolph Stieler and published by Justus Perthes in 1848.

Adolf Stieler (1775 – 1836) was a German cartographer who worked most of his life in the Justus Perthes Geographical Institute in Gotha. His atlases are deservedly held in high esteem for their excellence. His Handatlas was the leading German world atlas until the middle of the 20th century, parts of which were printed until 1944. Learn More...