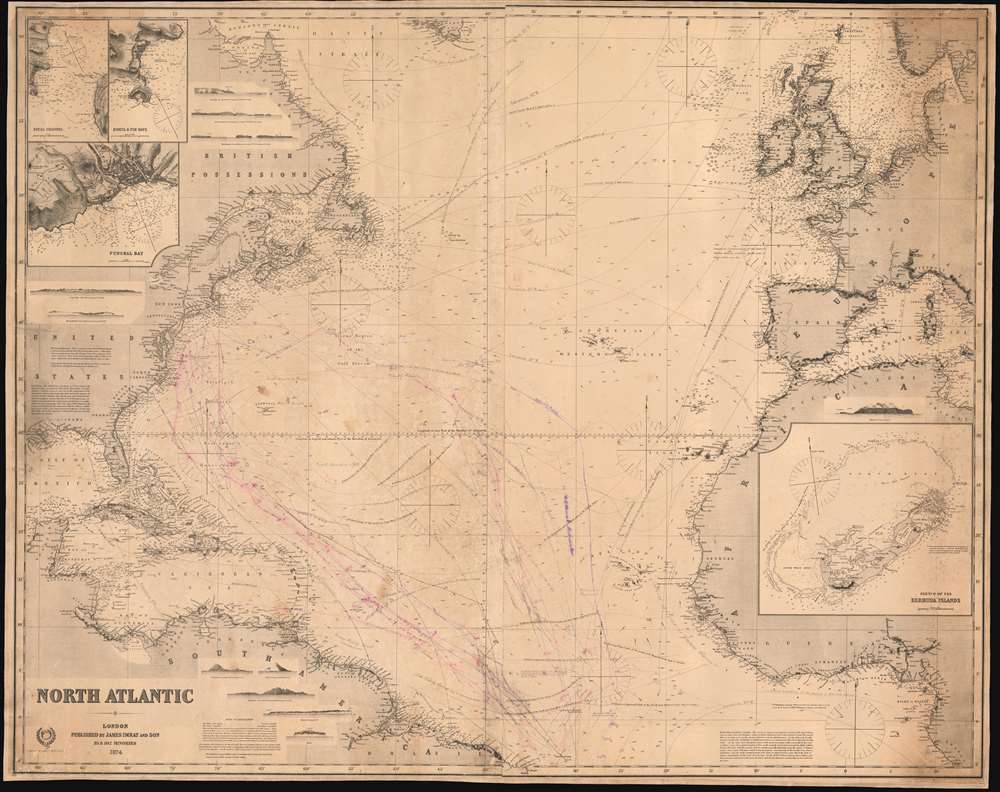 This is an uncommon 1874 James Imray and Son blueback nautical chart or maritime map of the North Atlantic with extensive whaling annotations relating to the voyages of Newburyport Captain John. N Pritchard. The map covers from the Equator and the mouth of the Amazon river to the southern shores of Greenland, and from the Gulf of Mexico to the Baltic Sea and Sardinia. The chart contains a wealth of nautical information regarding trade winds, oceanic depths, currents, and more. There are detailed inset maps of Bermuda, Fayal Channel (Faial-Pico Channel), Azores), Horta and Pim Bays (Azores), and Funchal Bay (Madeira). Some pencil marks and erasures suggest early maritime use in the vicinity of Bermuda.

The Annotations and Voyages

The map contains extensive annotations relating to the voyages of the Newburyport Captain John N. Pritchard (1833 - 19??), who was active from about 1865 to 1905. Pritchard was born in Newburyport and began his sailing career as a cabin boy at 12. Working his way through the ranks, he eventually became a shipowner. The present chart focuses on the voyages of his final two ships, the clipper ship Lucy S. Wills and the merchant/whaling bark Benjamin F. Hunt. Most of the recorded voyages focus on the B. F. Hunt traveling between Boston, New York, and the South Atlantic and points farther afield.

Imray first copyrighted this map in 1866, but it is heavily based upon an earlier chart issued by Imray in 1859. There are multiple editions of the present chart with minor updates and revisions appearing almost annually well into the 1880s. The present example is dated to 1874.

Average. Working nautical. Professional restored and rebacked. Some soiling, pencil annotations related to navigation, cracking of paper.
Looking for a high-resolution scan of this?