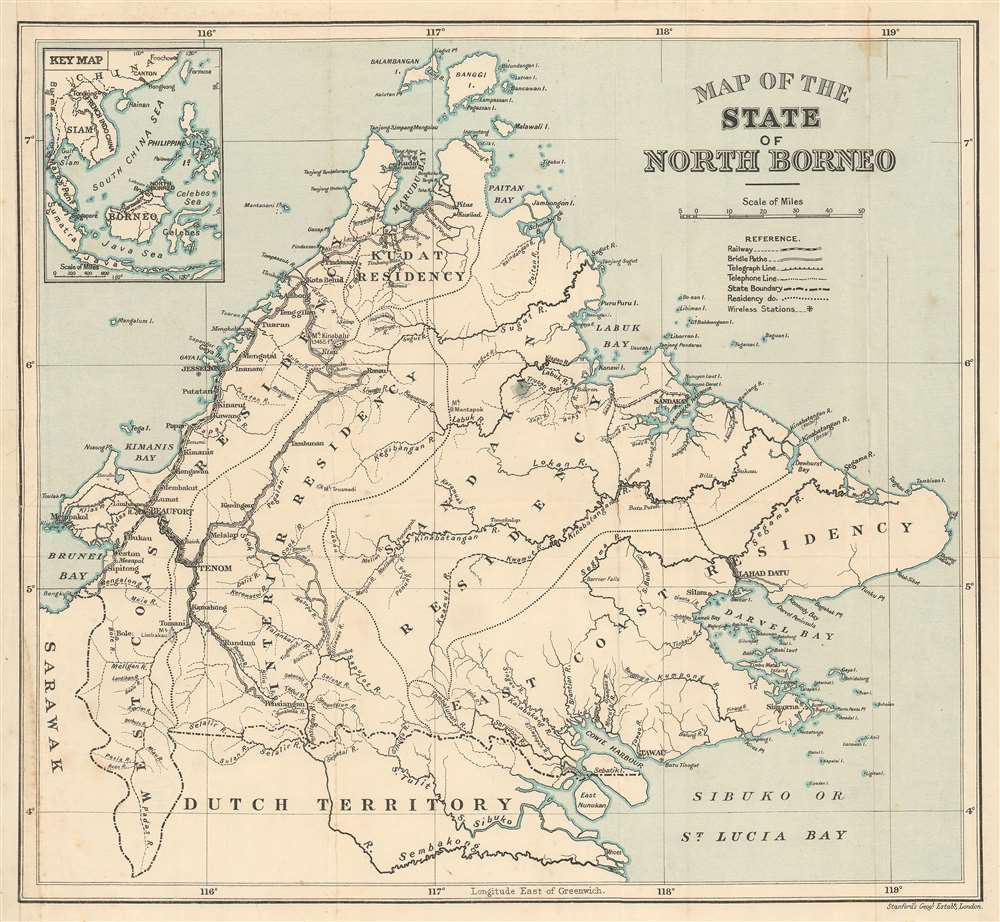 A rare c. 1926 Edward Stanford Geographical Establishment map of British Northern Borneo, or the modern Malaysian state of Sabah. Coverage extends from Sarawack to the Sulu Sea, and from Balambagan Island and Banggi Island south to Dutch Borneo or what is today Kalimatan. The map focuses on infrastructure, an important metric for the development of the region, highlighting railways lines, bridle paths, telegraph lines, telephone lines, and wireless stations. It also maps the inland river systems with car, underscoring the fact that, despite entering the age of rail, the primary arteries of trade in North Borneo remained the waterways. A smaller inset general map of the East Indies and Southeast Asia appears in the upper left.

The story of British North Borneo begins with the German businessman Gustav Overbeck (1830 - 1894). Overbeck, then acting at Austrian consul in Hong Kong, purchased land and trading rights to North Borneo from the American Trading Company of Borneo, owned by Joseph William Torrey (1828 - 1885), the heirs Thomas Bradley Harris (1826 - 1866), and a consortium of Chinese investors. North Borneo was, at the time, largely claimed by the Sultan of Brunei, to whom Overbeck appealed om 1878 for a renewed concession, resulting in Overbeck achieving legal control over all of North Borneo. Overbeck attempted to sell the territory unsuccessfully to Imperial Germany, Austria-Hungary, and the Kingdom of Italy, but none had an interest. Instead he turned to the British merchants Alfred (1844 - 1927) and Edward Dent (1846 - 1929), who offed administrative support and financing to develop the colony.

Around this time, Spanish forces in the Philippines forced the surrender of the Sultan of Sulu, threating Overbeck's authority in North Borneo. Overbeck decided to cut his losses in 1879 and in 1881 transferred his remaining rights fully to the Dent brothers, who went on to establish the North Borneo Chartered Company. The joint stock company, supported by the British Crown, was able to overcome the Spanish-Philippine threat and began building territorial infrastructure. British North Borneo developed steadily under the North Borneo Chartered Company, becoming a formal British Protectorate in 1888. It remained under British control until World War II, when the Japanese invaded, destroying nearly all infrastructure. After the war, North Borneo was transferred to the British Colonial Office who administered it from Malaysia. With the founded of Malaysia in 1963, North Borneo became the Malay state of Sabah.

This map was published by Stanford's Geographical Establishment in London. The map is undated, but from the development of the railroad and telecommunication lines, we estimate it to have been produced c. 1926. This map is a considerable rarity, with no other examples known.