1943 Owens and Minneapolis Morning Tribune Map of the Northeast Passage 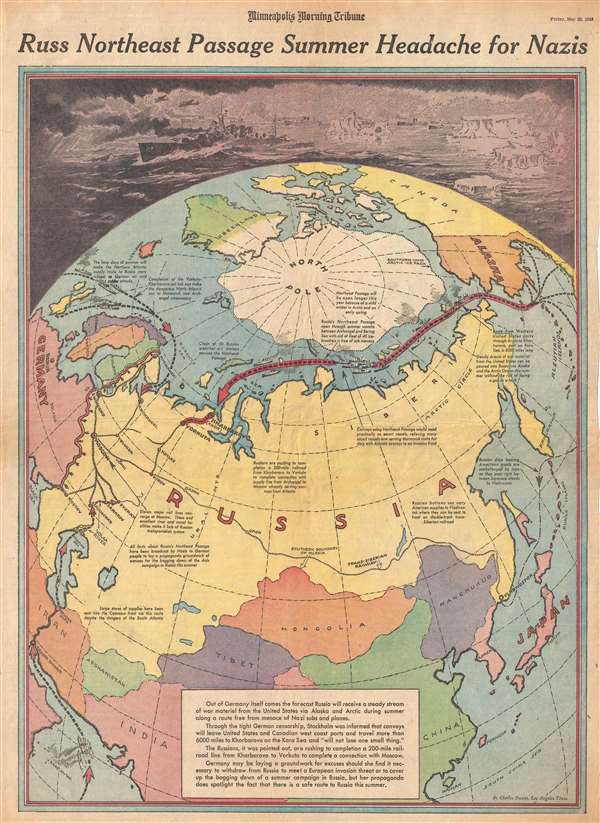 1943 Owens and Minneapolis Morning Tribune Map of the Northeast Passage

The summer supply route between the United States and Russia through the Arctic Circle.
$350.00

This is a Friday, May 28, 1943 Charles Hamilton Owens and Minneapolis Morning Tribune pictorial map of Asia illustrating the Northeast Passage. The map depicts the Earth from a polar perspective, with the North Pole at the center, Europe and Asia situated below the North Pole, and Alaska, Canada, and Greenland to the right and above the Pole. This highly important, and rarely discussed, trade route between the western United States and Kharbarovo in Russia, gets overshadowed by the carnage of the Atlantic shipping routes. Some text, situated throughout the map, explains the situation in this theater and what different shipping routes were available from the United States to its Allies.

By bringing attention to the relative success achieved by sending supplies to the Russians through the Northeast Passage, Owens and the newspapers that published this map brought hope to the American people that the sacrifices they were making to support the war effort were not completely in vain. Per the map, a 'steady stream of war material from the United States can be poured into Russia via Alaska and the Arctic Ocean this summer without risk of losing a gun or a tank.' Hundreds of thousands of tons of shipping were being lost in the Atlantic every month to German U-Boats, surface ships, and aircraft, thus the idea that shipments could be sent to the Russians with certainty that they would arrive was incredible. In May 1943, the Russians were the only Allied power in combat in continental Europe. The United States, Britain, and Free France were fighting Germany in North Africa, but the Allies wouldn't invade Italy until September 1943, and the Allied invasion of France would not take place until June 1944. Thus, any material support that could be provided to the Russians would directly go toward fighting an enemy that America couldn't engage any other way.

When Charles Hamilton Owens drew this map he was doubtless inspired by the work of Richard Edes Harrison, an American illustrator and cartographer who, working for Fortune magazine, pioneered a new style of representing the world for WWII era propaganda maps. Edes developed the convention of using spherical perspective with an exaggerated vertical dimension, as on the present map, to illustrate part of the world as part of a greater global situation. This map was created by Charles Hamilton Owens and printed in the Minneapolis Morning Tribune on Friday, May 28, 1943.