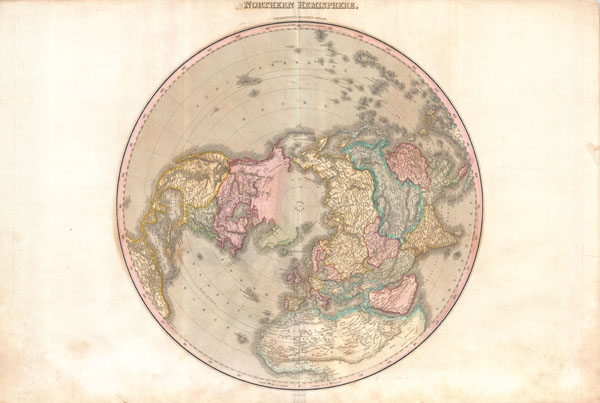 A rare and important 1818 map of the Northern Hemisphere by John Pinkerton. On a Polar projection, this map depicts North America, Asia, the East Indies, and North Africa.

In North America, thanks primarily to the work of Cook in the Pacific Northwest, the coasts are rendered with considerable accuracy. The interior of North America, particularly the American West, is still rather vague, though much of the cartography is clearly derived from the exploration of Humboldt and the Lewis and Clark expedition. Notes the apocryphal River Buenaventura as well as a conjectural placement of the western extreme of the Missouri River. The United States, still quite small, does not yet include Florida, Louisiana, California or Texas.

Asia is drawn with considerable accuracy thanks to Russian and Chinese cartographers, however, there remain some unexplored areas in Central Asia.

On the opposite side of the Arctic, in North America, there are notations regarding several 18th century expeditions up a number of Canadian river systems. Most of these take the form of 'Icy sea spotted by so and so.' At the time, this was the limit of Arctic exploration in Northern Canada.