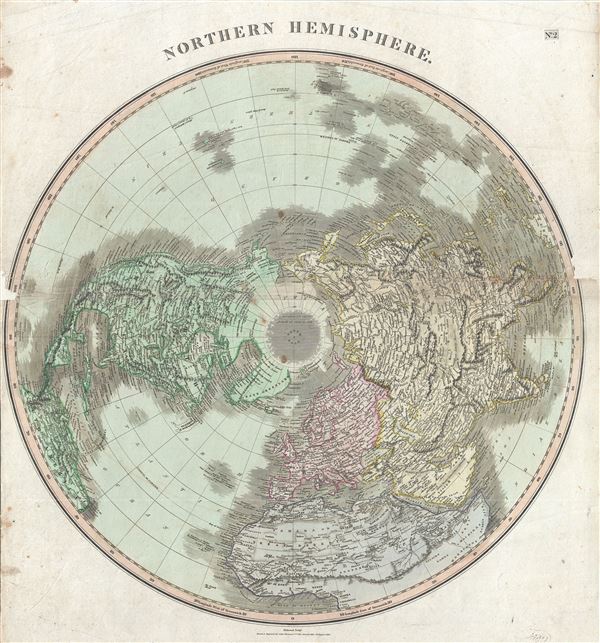 This fascinating hand colored 1814 map by Edinburgh cartographer John Thomson depicts the Northern Hemisphere from the Arctic to the Equator. Includes all of North America, Europe, and Asia as well as the northern part of Africa and South America. Impressive detail encompasses both political and geographic features. In Africa the mythical Mountains of Kong are shown extending eastward to join with the Mountains of the Moon – mythical source of the Nile River. Exhibits a general lack of information regarding the Arctic and connects Greenland with the mainland. Seems to leave the possibility of a Northeast though not a Northwest Passage open. Engraved by Kirkwood and published by Baldwin and Cradock as plate no. 2 in Thomson's New General Atlas.

Thomson, John. A new general atlas, consisting of a series of geographical designs, on various projections, exhibiting the form and component parts of the globe; and a collection of maps and charts, delineating the natural and political divisions of the empires, kingdoms, and states in the World. Constructed from the best systematic works, and the most authentic voyages and travels. With a memoir of the progress of geography, a summary of physical geography, and a consulting index to facilitate the finding out of places. (1817 edition).

Good. Overall toning and foxing at places. Some wear and damage near original centerfold and loss near left and right borders, with verso repair and extension. Priced accordingly. Professionally flattened and backed with archival tissue for stability.