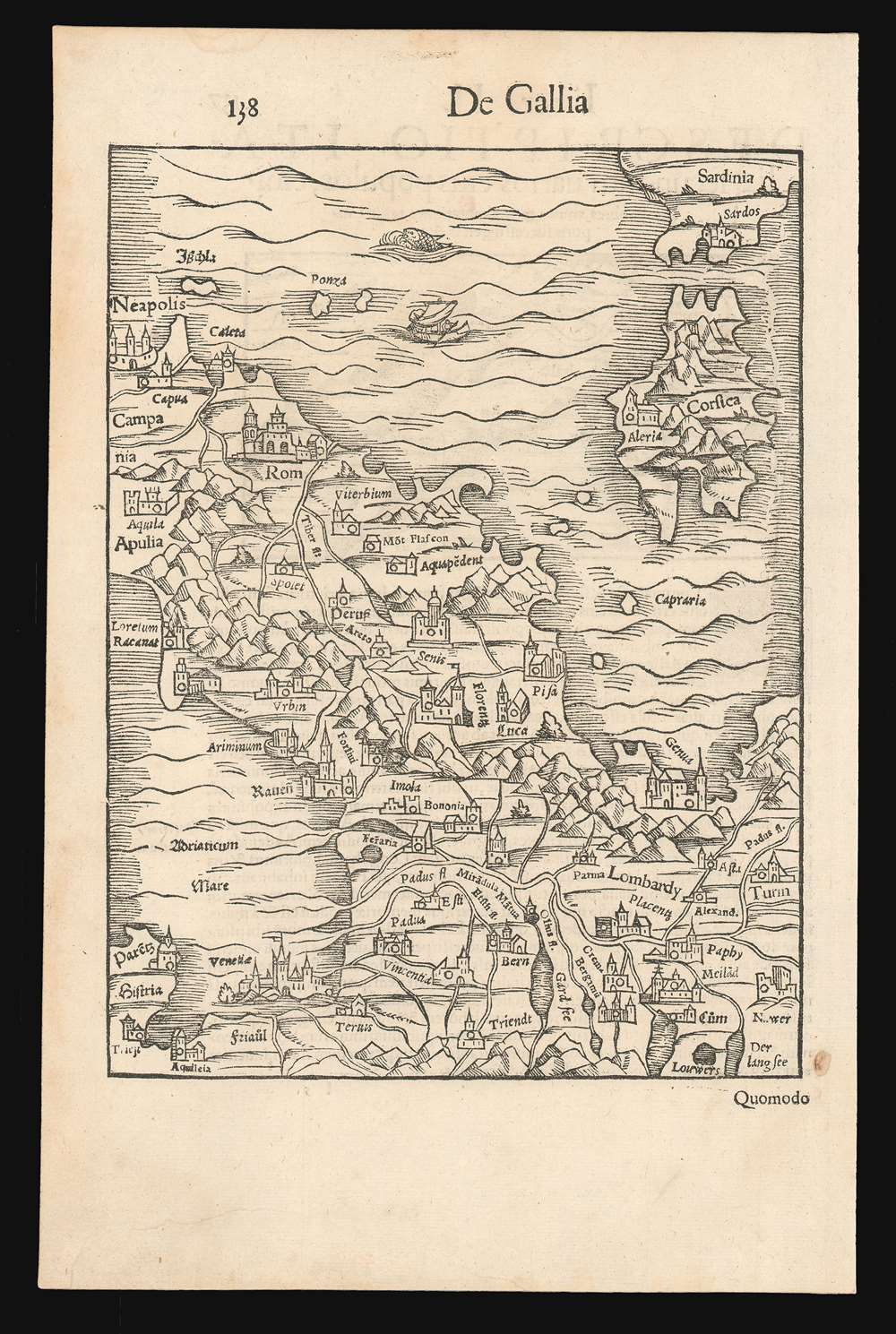 The first map of Northen Italy based on modern scientific survey techniques.

Issued in 1554 by Sebastian Münster, this is one of the earliest printed maps of Northern Italy based on contemporaneous data. The southern-oriented map shows the peninsula from Naples northwards to the Alps. Cities include Rome, Florence, Pisa, Turin, Genoa, and Venice. The broader regions of Campania, Abruzzo, and Lombardy are labeled. Corsica and the city of Aleria, as well as Sardinia and the city of Sardos appear as well.

Münster’s decision to orient many of his maps to the south was not whimsical, but the direct result of the modern methods used in their production. German instrument makers, surveyors and geographers in the first half of the 16th century used the sun to determine north and south: solar compasses of the period oriented their users towards the equator, and maps derived from measurements based on solar observation shared that orientation. In Munster’s 1528 Erklerung des newen Instruments der Sunnen, Munster provided a primer of topographic surveying and mapping using solar instruments. Maps produced using the methodology he prescribed (for example, the map of the Heidelberg which he included in the text) were oriented towards the south. Such maps of this period produced in the southern hemisphere were likewise oriented to the equator – and consequently were oriented towards the north.

More than a primer, Münster’s 1528 work was a manifesto advocating collaborative cartography based on rigorous scientific principles. Münster positioned himself as the editor of a new work of cartography, and called to the scholarly world to send him illustrations, text materials, and new maps produced using his methodology. These maps, appearing in both Münster’s 1540 Geographia and his 1544 Cosmographia, are oriented towards the south: in other words, the southern orientation of these regional maps marks them as the product of modern scientific survey, supplanting the legacy of maps passed down to 16th century geographers from Ptolemy. Beyond this advance in the production of new maps, Münster’s contribution to the future of cartography lies in his formalization of his role as editor, relying chiefly on eyewitness reports from multiple sources and heralding the evolution of cartography into a scientific discipline and laying the foundations for the atlases of later masters such as Mercator and Ortelius.

The map appeared in Münster's Cosmographia, and appears to have been added to the often-updated work as early as 1550. Cosmographia was wildly successful, remaining in print long after Munster's death of the plague in 1552.

Very good. One marginal spot. A fine example with a bold strike.
Looking for a high-resolution scan of this?