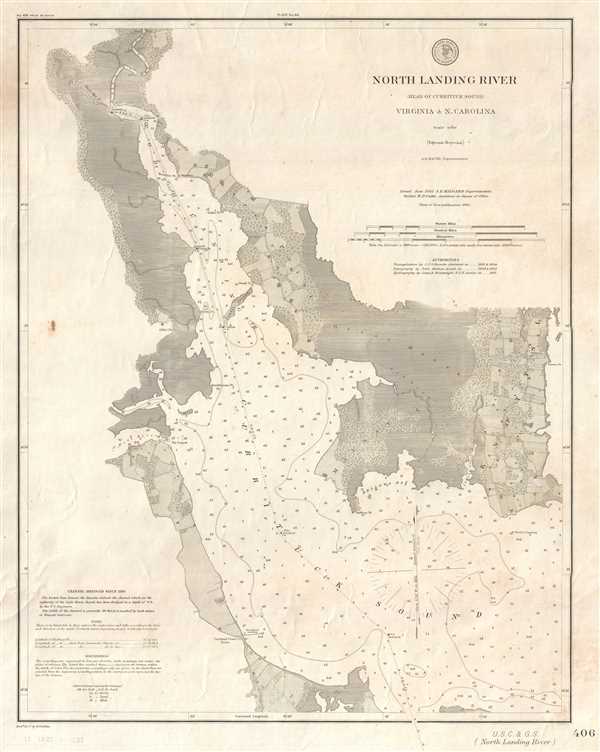 The North Landing River forms the head of Currituck Sound, part of the coastline of both North Carolina and Virginia.
$400.00

This is a separate issue 1882 U.S. Coast and Geodetic Survey nautical chart or maritime map of the North Landing River, which comprises the head of Currituck Sound, in both North Carolina and Virginia. The map depicts the region from the Pungo Ferry south along the North Landing River to Currituck Sound, including a portion of Knott's Island. A highly detailed chart, myriad depth soundings, measured in feet, are indicated throughout. The channel, which was dredged in 1880, is illustrated with several heading notations to ease navigation. Points, islands, and other landmarks are labeled, and the consistency of the river bottom is noted all along the river. The coastlines are not extremely detailed, although fields, roads, and individual houses are illustrated. The steamboat landing at Currituck Court House is illustrated and labeled as well.

This map was engraved by F. Farfax and issued by the United States Coast and Geodetic Survey in June 1882 when Julius Eraasmus Hilgard was serving as Superintendent.

Very good. Backed on linen. Light soiling. Blank on verso.
Looking for a high-resolution scan of this?