1795 Carey / Scott Map of the North Pacific; Routes of Exploration 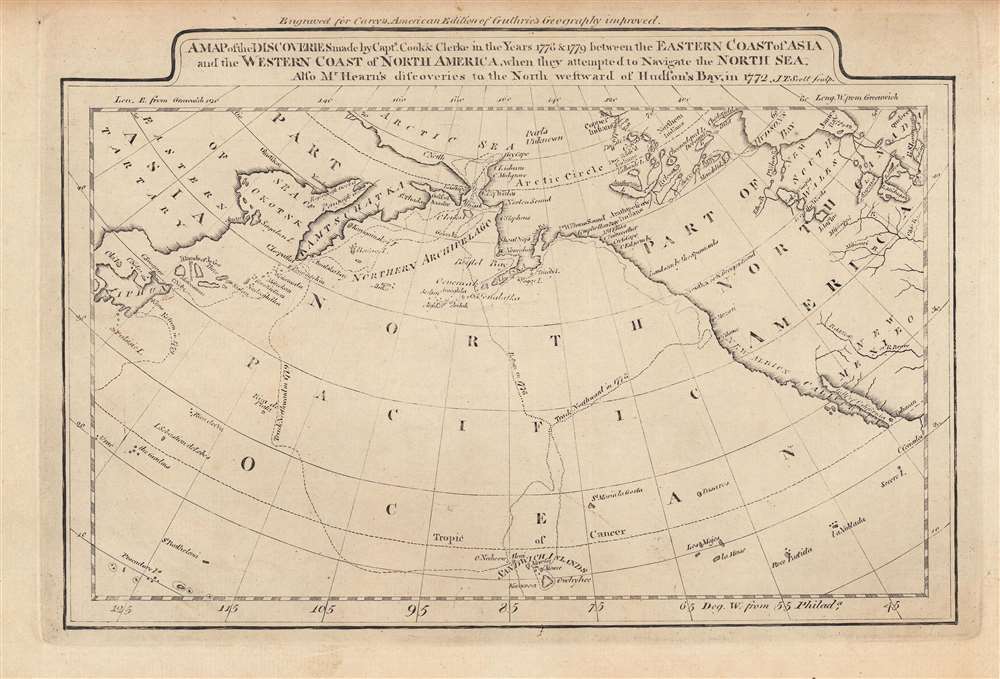 1795 Carey / Scott Map of the North Pacific; Routes of Exploration

The earliest map of the North Pacific published in the American Republic.
$450.00

This is a rare c. 1795 map of the northern Pacific Ocean from Carey's General Atlas, the first atlas published in the new American Republic. It highlights the three Pacific voyages of Captain James Cook and the overland route from Hudson's Bay to the Artic Ocean, 'discovered,' with critical help from indigenous guides, by Samuel Hearne.

The scope of this conic projection map stretches from the Russian Far East and Japan to the west coast of North America and through the continent to Hudson's Bay. Elements of this geography were only loosely understood at the time, as reflected in the odd proportions of Alaska, Sakhalin (Sagaleen), and Ezo (Jeiso), as well as the inclusion of the Pescadores (Penghu) but not the much larger Taiwan (Formosa) nearby. Two prime meridians of Greenwich and Philadelphia are given, the latter being standard in Carey's Atlas.

Captain James Cook made three pioneering Pacific voyages between 1768 and 1779, being the first European to traverse and map much of the Pacific. By the time of his third long-distance voyage in 1776, Cook was a very experienced naval officer and a celebrated figure in elite and scientific circles. On his third voyage, after briefly stopping at the Hawaiian Islands in January 1778, Cook explored the west coast of North America up to the Bering Strait before returning to Hawaii in early 1779. After possibly being mistaken for a deity, Cook and his crew got into scuffles with the local population and attempted to kidnap Kalaniʻōpuʻu, the King of Hawaii. In the ensuing fracas, Cook was attacked and killed, but was still somewhat revered by the local people and his remains were given ceremonial treatment.

After Cook's death, the expedition was led by Charles Clerke, an officer who had served with Cook on the previous Pacific voyages. However, Clerke was suffering from advanced tuberculosis and was bedridden until his death off the Pacific coast of Siberia on August 22, some six months after Cook. Command then passed to John Gore, who eventually led the expedition back to London in October 1780, with the crew decimated and demoralized. Nevertheless, the voyage collected important cultural, scientific, and geographic information and helped solidify Cook's reputation as one of the great explorers of his age.

Samuel Harne (February 1745 – November 1792) undertook three expeditions from Hudson's Bay from late 1769 – 1772, the last of which reached the Artic Ocean, making him the first European to arrive at the Article via an overland route. Hearne's original mission was to locate copper which might be mined, as the British were aware that northern First Nations peoples had copper goods (thus their being labelled 'Copper Indians' here).

Hearne was totally reliant upon Indian guides, both groups with established connections with the British (namely the Cree and Chipewyan) and First Nations who had only intermittently traded with the British. More specifically, Hearne was accompanied by a group of 'Yellowknife' (Dene) hunters and a hunter-guide named Matonabbee (c. 1737–1782), who was in effect the leader of the expedition. It would not be an exaggeration to say that Matonabbee deserves the credit for discovering the route, as well as keeping Hearne alive through several harrowing difficulties during the expeditions.

In addition to reaching the Arctic, Hearne's expedition showed that there was no Northwest Passage below the Arctic. These discoveries were marred by the massacre of twenty Inuit ('Copper Inuits'), with whom the Dene were at war, soon before the expedition reached the Arctic. After the expedition's success, a smallpox epidemic and the French capture of the British Hudson Bay trading posts destroyed Matonabbee's business as a middleman for the British and he committed suicide in 1782.

This map is likely from an early edition of Carey's General Atlas (sometimes subtitled American Edition of Guthrie's Geography improved), multiple editions of which were printed between 1795 and 1818. This is likely an early edition as later editions included colored ink to show borders between countries or to shade entire countries to more easily distinguish them. It appears to be identical to the edition included in the David Rumsey Map Collection, which is dated to 1795. The prevalence of the map is difficult to determine since the map is not always cataloged with the year recorded, but both the individual map and the entire atlas are held by a small handful of universities and research institutions in the United States and Europe.


William Guthrie (1708 - March 9, 1770) was a Scottish historian, journalist, and writer. Born in Brechin, he studied at Aberdeen University with the idea of becoming a parochial schoolmaster. Instead, in 1730, he elected to settle in London and try his hand at literature. He covered parliamentary debates f or the Gentleman's Magazine and soon earned a reputation for being a political writer. He published several scholarly works, including a History of England from the Invasion of Julius Caesar to 1688 in four volumes, and, most notably, his Geographical Historical, and Commercial Grammar. Learn More...