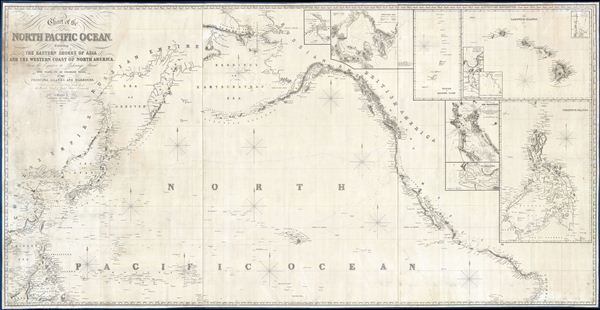 A spectacular and massive 1849 James Imray nautical chart or maritime map of the northern Pacific. Roughly centered on Hawaii, this sprawling chart covers from Hainan and Borneo eastwards to Columbia and Panama, and from the Behring Strait to the Moluccas and the Galapagos Islands (the Equator). The chart is rendered on a Mercator Projection with latitude measured from Greenwich, England. Like most nautical charts, the cartographer offers very little inland detail, but a wealth of maritime data. This includes the identification of various ports and harbors, coastal topography, shoals and other undersea dangers, and countless depth soundings in fathoms. Additionally, the cartographer has noted aspects of various islands that may have been of importance to the mariner, for example Christmas Island has 'Plenty of Turtle, no fresh Water.'

This map is decorated with ten inset maps, from top center, Victoria Harbor (British Columbia), Awatska Bay on the east coast of Kamtschatka, the Mariana or Ladrones Islands (including Guam), the Hawaiian or Sandwich Islands (with four sub-insets: Waiakea or Byron Bay, Hanalei Bay (Kauai), Honolulu Harbor, and Kailua Bay), San Francisco Bay, the Mouth of the Columbia River (including the Fort Astoria settlement), and the Philippine Islands.

Manuscript sailing markers added in pencil indicate that the last known use of this chart was in 1852 by Captain Honsbury of the Louisiana. We have found little information on the Louisiana. Apparently, she was a wooden barque of 1,344 tons that regularly sailed between Oregon Territory and San Francisco. Based upon what little evidence we have found, and of course the chart itself, it seems likely that the Louisiana was engaged in the fur trade associated with the John Jacob Astor's Fort Astoria trading post on the Columbia River. The routes traced on this map suggest multiple voyages between fur centers in the Pacific Northwest and the regional hub of San Francisco. With China being the largest market for North American furs, the trip to Hong Kong marked here seems a natural extension of this trade.

This chart is extremely scarce. We have been able to identify only a few examples in institutional collections and minimal sale records. This present example, 1849, seems to be the first and only edition, although John Norie, another British chart publisher, did publish a similar chart in 1825.