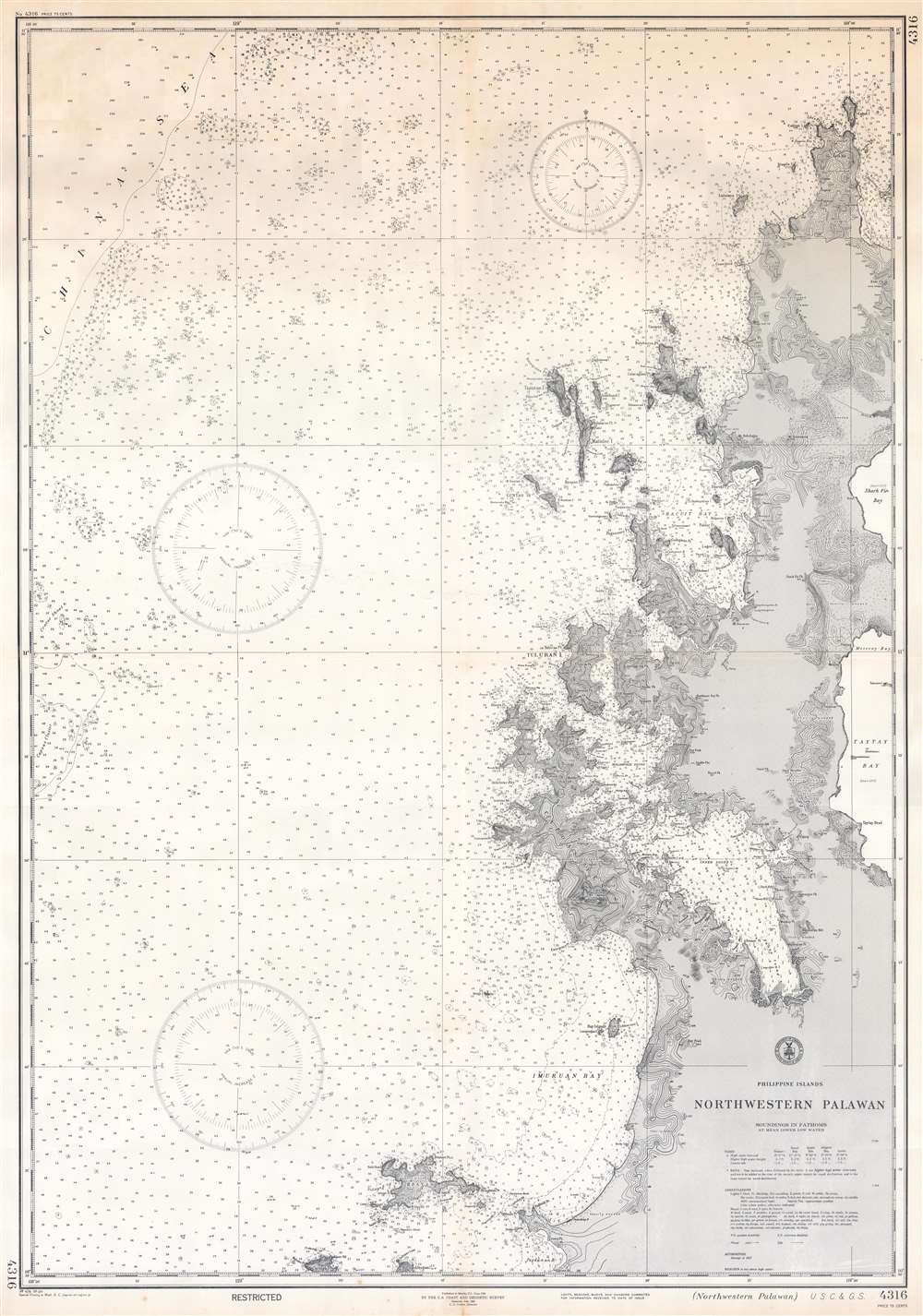 This is a 1944 U.S. Coast and Geodetic Survey nautical chart or maritime map of the northwestern coast of Palawan, Philippines - prepared for World War II, but today representing a world renowned ecotourism mecca. The present example represents a special printing published in May 1944 in preparation for the Allied invasion of the Philippines. Coverage extends from Cabuli Island south along the coast to Pagdanan Bay, with peninsulas, bays, and points are illustrated and labeled. Inland topography is defined by contouring with elevations in feet. Depth soundings appear along the coast and as far west as the China Sea, providing essential maritime data. Information concerning tides, abbreviations, and other important data is included below the title in the lower right.

Launched on October 20 of 1944, the Philippine Campaign was a World War II joint American and Filipino military operation intended to liberate the Philippine Islands from occupying Imperial Japanese forces. The Japanese Army overran most of the Philippines during the first half of 1942, retaining it for the subsequent 2 years. American General Douglas MacArthur began the campaign by announcing on Philippine radio 'This is the Voice of Freedom, General MacArthur speaking. People of the Philippines: I have returned.' The campaign progressed rapidly, driving the Japanese out of one island after another. Although by this time the Japanese were clearly losing the war, they gave no sign of capitulation and refused to surrender. During the course of the campaign Japan suffered nearly half a million casualties compared to only about 50,000 Americans. The campaign continued until Japanese forces in the Philippines were ordered to surrender by Tokyo on August 15, 1945, after the dropping of atomic bombs on Hiroshima and Nagasaki.

Northwestern Palawan is renowned worldwide as an ecotourism destination. Its pristine beaches and crystal-clear waters call more than one million visitors to Palawan annually. El Nido and Coron are must-visit destinations Philippine tourists.

This edition of this chart was printed in May 1944, five months before the Allied invasion of the Philippines during World War II. First published in Manila in June 1938, the chart was then reissued in February 1939. The Philippines fell to the Japanese in 1942. The U.S. government issued the first special printing of this chart in May 1942, with the present edition appearing a little under two years later. We note only one example of any edition of this chart cataloged in OCLC, which is part of the collection at Stanford University and represents the reissued February 1939 edition.