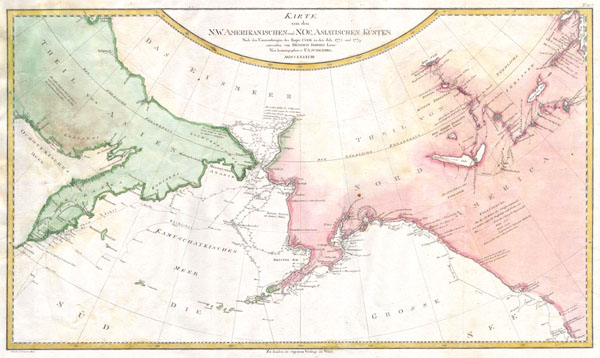 A rare German language variant of Cook's map of his explorations along the northwest coast of America and the northeast coast of Asia. Based upon original work by Cook's cartographer Henry Roberts. Depicts much of Siberia and Kamtschaka in Asia and, in America, shows Canada as far east as the western portions of Hudson Bay. Alaska and Asia are shown with considerable accuracy though Vancouver Island is missing. Shows several lakes west of Hudson Bay in what is today northwestern Canada. Numerous depth soundings detailed along the exploration tracks. In addition to Cook's work, also notes the explorations of Bodega and the inland discoveries of Hearn, and others. Engraved by I.C. Lackner for the 1788 edition of the Allgemeiner Grosser Atlas, plate no. 107.

Phillips, Philip Lee, A List of Geographical Atlases in the Library of Congress, 694-50. Kershaw, Kenneth A., Early Printed Maps of Canada, 1149.
Looking for a high-resolution scan of this?