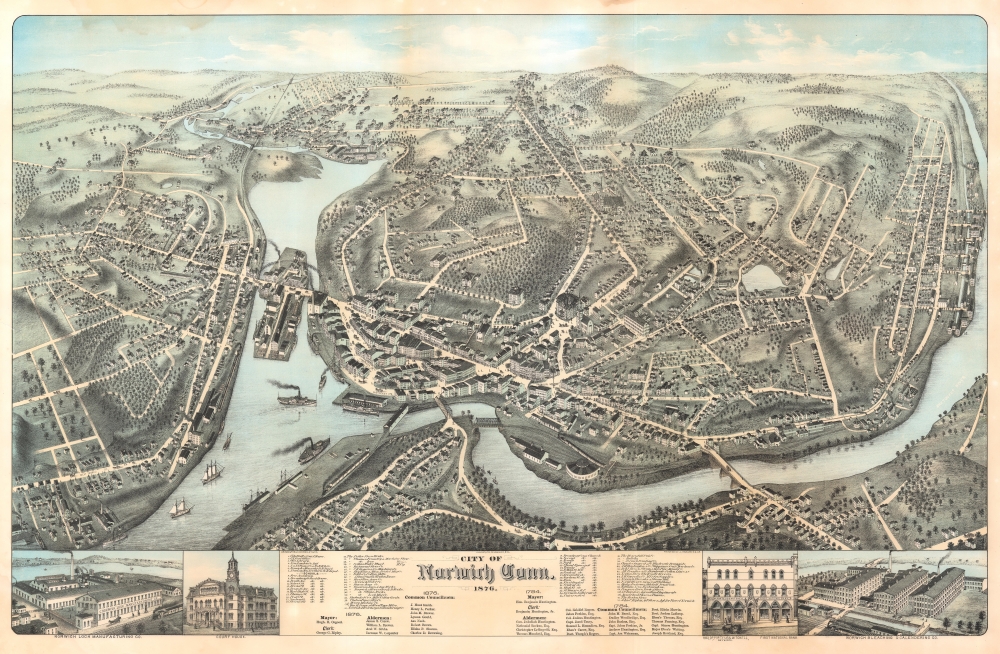 This is a rare 1876 bird's-eye view of Norwich, Connecticut, by Oakley Hoopes Bailey. Centered on the conjunctions of the Yantic, Shetucket, and Thames Rivers, the view looks northwards towards the Norwich from a fictive high point just to the south. It illustrates Norwich early in the industrial revolution, with paddlewheel steamships competing for space on the river with sailing ships. Holly Hock Island is here a place of industry, with large factories billowing black smoke. Forested bucolic hills fade off into the horizon.

Along the bottom of the view are illustrations of Norwich Lock Manufacturing Co., the Court House, Hislop, Porteus and Mitchell Dry Goods, the First National Bank, and the Norwich Bleaching and Calendering Co. Just below the title there is an index to points of interest, and local government officials for 1876 and 1784.

This view was drawn and published by Oakley Hoopes Bailey. It was engraved in lithographic stone by Charles H. Vogt and printed by Jacob Knauber. This view is quite rare with the OCLC identifying only 4 examples in institutional collections. Further examples are located in the Boston Public Library and, at least one other example is in private hands.

Oakley Hoopes Bailey (June 14, 1843 - August 13, 1947) was a prolific American viewmaker, artist, and lithographer active in late 19th and early 20th century. Bailey was born in Beloit, Mahoning County, Ohio. He matriculated in 1861 at Mount Union College in Alliance, Ohio. At the outbreak of the American Civil War he briefly abandoned his studies for 2 years, wherein he saw combat as a Union solider. After the war, in 1866, he returned to Mount Union to complete his degree. Bailey was the younger brother of another view artist, Howard Heston Bailey (1836 – 1878) and followed his brother into the print business, producing his first city views, of Milwaukee, Wisconsin, in 1871. Active from 1871 to1926, Bailey is known for more than 375 recorded city views, covering more than 13 states 2 Canadian provinces, making him one of the most active viewmakers in American history. In 1875, he settled in Cambridge, Massachusetts and most of his subsequent work focused on Massachusetts and Connecticut. Bailey worked with many other American viewmakers of the period, including his brother, Howard Heston Bailey, Thaddeus M. Flower, and J. C. Hazen, among others. Bailey died in his hometown of Alliance at the ripe old age of 103.


Jacob Knauber (1846 – 1905) was a German-American lithographer based in Milwaukee, Wisconsin. Knauber was born in Heidelberg, Germany and emigrated to America as a young man. He apprenticed as a lithographer in St. Louis from 1861. In 1867 he foundered J. Knauber Lithographing Company, which he would eventually run with his three sons, Arthur, Walter, and Richard. The firm specialized in American city views, billheads, letterheads, receipts, and checks. Knauber managed the firm it until his death in 1905. Afterwards it was run by his children until 1946 when it was acquired by Columbia Art Works.