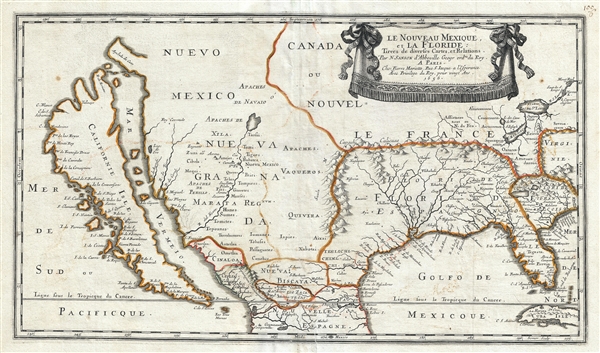 Sanson’s 1650 map of North America and 1656 map of New Mexico seem to the present writer by far the most interesting and important maps … - C. Wheat

Sanson and Mariette's 1656 first edition map of the central and western part of North America is one of the most important maps ever published pertaining to the American west. This map represents the first time this region has been presented on such a scale and, a such, introduces many firsts and had a lasting influence on American cartography for the subsequent 50 years. Among the maps innovations are its introduction to the general public of the Luke Foxe model of California as an Island. It is also the first map to use the term 'Erie Lac' to identify Lake Eire. Further, it is the first map to introduce the idea of Floride Francois and assert French claims to the modern day South Carolina – Georgia region.

Sanson's map covers from insular California to modern day North Carolina and Virgina, and form the St. Lawrence River to Cuba and Guadalajara. The maps most eye catching feature is doubtless the cartographer's dramatic presentation of California as an Island. The idea of an insular California first appeared as a work of fiction in Garci Rodriguez de Montalvo's c. 1510 romance Las Sergas de Esplandian, where he writes

Baja California was subsequently discovered in 1533 by Fortun Ximenez, who had been sent to the area by Hernan Cortez. When Cortez himself traveled to Baja, he must have had Montalvo's novel in mind, for he immediately claimed the 'Island of California' for the Spanish King. By the late 16th and early 17th century ample evidence had been amassed, through explorations of the region by Francisco de Ulloa, Hernando de Alarcon and others, that California was in fact a peninsula. However, by this time other factors were in play. Francis Drake had sailed north and claimed Nova Albion (identified here on the northwest coast of California Island) near modern day Washington or Vancouver for England. The Spanish thus needed to promote Cortez's claim on the 'Island of California' to preempt English claims on the western coast of North America. The significant influence of the Spanish crown on European cartographers, especially the important French house of Sanson, in the form of the presently offered map, caused a major resurgence of the Insular California theory.

The insular California presented here is often erroneously referred to as the 'Sanson Model.' The term is in fact derived from a 1635 map of the North American Arctic drown by Luke Foxe. It was Foxe who invented many of the place names as well as added various bays and inlets to northern California. Among these are Talaaago, R. de Estiete, and the curious peninsula extending westward form the mainland, Agubela de Cato. Foxe's sources remain a mystery and his mapping may be based upon nothing more than fantasy, but Sanson embraced the model whole heartedly. Although Sanson did not invent this form of insular California, his substantial influence did popularize it. The present map established the standard conventions upon which California was mapped for the subsequent 50 years.

Further east the cartographer identifies the Cibola, one of the legendary Seven Cities of Gold sought after by the Spanish conquistador Francisco Vázquez de Coronado. Coronado, inspired by indigenous tales of magnificent cities in modern day New Mexico, lead a gigantic expedition northward from Mexico with the ambition of becoming another Cortex or Pizarro. Coronodo never discovered his cities of gold, but instead discovered several Zuni pueblos, some of which, including Acoma, Moqui, and Cibola itself are identified here. The name Cibola itself is something of a mystery as the term is neither Spanish nor Zuni. The first use of the term can be associated with Estebanico, a Moorish slave who, along with the Spanish nobleman Cabeza de Vaca, traveled through this region after a shipwreck on the Florida coast. It was reports of Estebanico that ultimately launched the Coronado expedition. Estebanico was sent ahead to scout the region. On arriving at Zuni, Estebanico reported back to the conquistadors that 'Cibola' was before them, then went ahead alone toward the Zuni never to be seen again. Estebanico was fluent in many languages, including indigenous American Indian languages, Spanish, and of course his native Arabic. In Arabic, the phonetically similar word 'subola' means, 'the way.' Estebanico may have simply been offering directions.

To the east Sanson introduces the interesting concept of Floride Francois. This territory, comprising much of modern day South Carolina and Georgia, is a French claim that dates to a 1562 - 1565 French attempt, under Jean Ribault (1520 – October 12, 1565) to colonize Florida. The French established two settlements, made several hundred gallons of wine, nearly died of starvation, and were ultimately whipped out by a Spanish fleet commanded by Pedro Menéndez de Avilés. Menendez went on to found St. Augustine, the oldest continuously occupied European established settlement within the contiguous borders of the Untied States. Although the French made no further attempts to establish a colony on the North America's southeast coast, Sanson is clearly using his cartographic influence to advocate for a great French empire in North America.

Also of great importance is Sanson's mapping of the Great lakes. Here Only Lake Erie and Lake Ontario are noted, of the other Great lakes, there is no trace. Nonetheless, this is, importantly, the earliest map to use the term Erie Lac to identify Lake Erie. The lake, also, is placed about 2.5 degrees too far south. This may be a mistake, but it is more likely yet another example of Sanson's carto-advocacy for a greater French Empire in North America. By moving the lake southward, he increases French claims sufficiently that he can connect to to his Floride Francoise.

Within the boundaries of Floride Francoise the cartographer identifies to large inland lakes. These apocryphal lakes make their first appearance on the De Bry / Le Moyne map of 1591. The largest of these is represented as the source of the River May. In that chart Le Moyne correctly mapped the River May (St. John's River, Florida) in an inverted 'V' form, first heading north, then south to meet with a large inland lake (in all likely hood Lake George or one of the other great inland lakes of Florida). Hondius on the other hand maps the course of the May heading to the northwest, thus relocating the Lacus Aquae Dulcis, the larger of the two lakes shown here, far to the north. This error can be understood in terms of magnetic variation, temperature issues associated with isothermal lines, and navigational errors related to the confusion of the star Asfick with Polaris. While Le Moyne correctly located the mouth of the River May at 30 degrees of latitude, Hondius maps it between 31 and 32 degrees. This led to a misassociation of the River May with the Savannah River. Thus, while the real River May dips southward, the Savannah River heads almost directly NW into the Appellation Mountains, forming the modern southern border of South Carolina. Hondius, no doubt taking his cue from navigators who rarely trekked inland, therefore rerouted the May River to flow from the northwest. Without an accurate picture if the interior, Hondius followed Le Moyne's example and translocated the great freshwater lake to the north. Others have speculated that the Le Moyne's River May is in fact the St. John's River, and that the Lacus Aquae Dulcis, is in fact the Okefenokee Swamp - however, this argument runs counter most scholarship. The influence of the Mercator-Hondius firm was so pronounced in Europe that most subsequent cartographers, including as we see here, Sanson, followed their lead.

Although a great network of rivers is drawn extending northward into the heart of the continent from the Bahia del Spiritu Santo, nothing that can be truly called the Mississippi River has yet to appear on the map.

This map is of the utmost importance. Wheat writes,