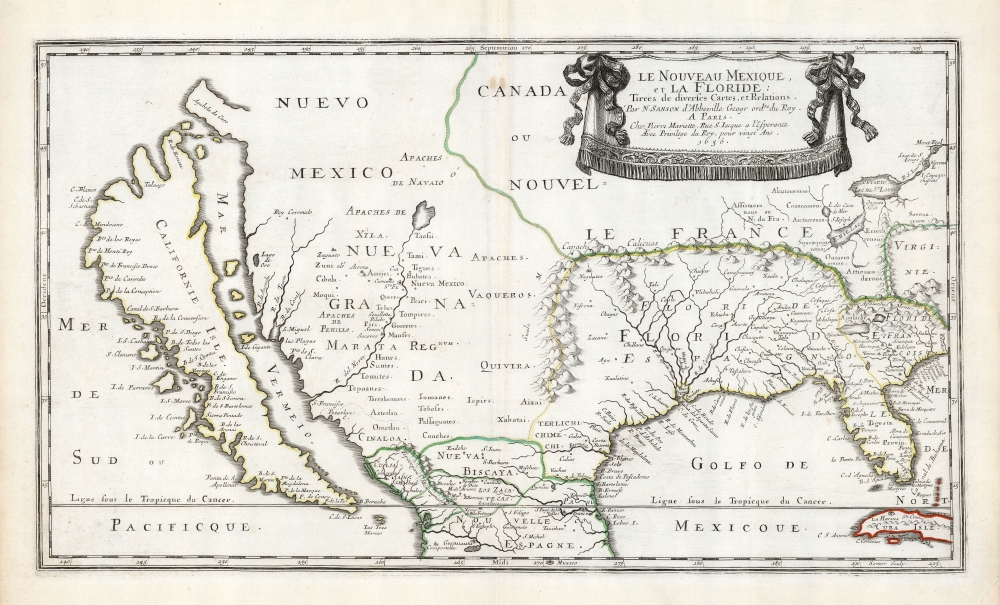 A must-have for the early mapping of the American west.

This is a beautiful example of Nicolas Sanson's 1656 map of New Mexico and Florida: the first atlas map to emphasize this geographical focus. It also presented arguably the most influential depiction of California-as-an-island, providing the dominant model of that cartography for the remainder of the seventeenth century, reaching into the eighteenth.

Of the Utmost Importance

The combination of this insular California with the map's New Mexico geography make this map a western Americanum of the utmost importance. Wheat writes,

Sanson’s 1650 map of North America and 1656 map of New Mexico seem to the present writer by far the most interesting and important maps - so far as what is now western United States is concerned - that had appeared since Enrico Martínez drew his little ‘sketch’ of Oñate’s route to Quivira in 1602 - and this despite their manifest deficiencies and their retention of much of the older mythical geography.

The southern limit of the map at approximately twenty degrees north allows the inclusion of part of Cuba, and the cities of Guadalajara and Compostela in Mexico; although it reaches 50° N, the actual detail presented drops off at 45° in the east (the St. Lawrence River, and Montreal) and approximately 48° in the west (Agubela de Cato, a peninsula appearing north of California unique to Sanson's cartography until its adoption by other mapmakers). The map's west-to-east reach includes all of the insular California and reaches as far east as Montreal, the Carolinas (Floride Francoise) and the western portion of Cuba.

Sanson's map is not the first to show a detailed, insular California - in that respect, it is predated by the maps of the English and the Dutch. By throwing his massive credibility behind the error, however, Sanson was able to firmly cement the idea beyond the limits of English and Dutch cartography. The broad effect of Sanson's efforts can be judged by the widespread adoption of the specific delineation of the island and its surrounds that he chose. Until this map, almost all iterations of the Island's geography were based on the models established by the 1624 Goos and 1625 Briggs maps. Sanson's map differed sharply in being the first to adopt the model proposed by Luke Fox(e) in his 1635 polar projection. That model (characterized by its series of bays along the north shore of the island of California and the peninsula Agubela de Cato appearing north of it along the mainland) was thereafter swiftly absorbed, and not only by the French. It became the dominant model for California among Dutch mapmakers (such as Allard and De Wit), and Italians such as Coronelli. That this formulation of the insular California is typically termed 'the Sanson model' rather than 'the Foxe model' is a testament to the impact Sanson's credibility lent to it.

Cities of Gold and the Rio del Norte

East of California (on the mainland, as it appears) can be found a similarly influential array of canards. Nestled amongst credible tribal names can be found Cibola, one of the legendary Seven Cities of Gold sought after by the Spanish conquistador Francisco Vázquez de Coronado. While he never discovered his cities of gold, he did interact with several Zuni pueblos, some of which are named here. Santa Fe, the administrative center of the Spanish province of Nuevo Mexico, is noted and appears on the banks of the Rio del Norte (Rio Grande.) In this case, following the lead of earlier Dutch cartography, Sanson has this river flow westwards to the Sea of California (or Mar Vermeio, as here.) The multiplicity of tribal and place names all along the river lend credibility to the error, which would persist on maps until the 1687 Coronelli-Nolin map of New Mexico. The vast, imaginary mountain range reaching from Floride Francoise and enclosing Floride Espagnole might have been considered an impediment to any such river reaching the Gulf from Santa Fe. As it stands here, these mountains enclose a mighty watershed of rivers emptying into the Gulf of Mexico via a Bahia del Spiritu Santo in the vicinity of the Mississippi Delta. The mountain range curtails even the largest of these rivers, none of which can be construed as an analog to the Mississippi which would not appear on a map until the Hennepin of 1683.

Sanson's mapping of the Great Lakes, generally superior to that of previous maps, is only shown in part here: Lake Ontario is named (as it was on his 1650 North America map) as is Lake Erie (along with Sanson's 1656 Canada, the first map to apply the name 'Erie' to that body of water.) A small lake - perhaps a proto-'Lake St. Clair' is connected via a river to Erie. Points north from there are obscured by the cartouche, being beyond the scope of the present work.

The Carolinas Are French

Sanson's map diverges from the English and Dutch models as well by the prominent naming of the region of modern-day South Carolina and Georgia as 'Floride Francoise, a claim founded on the abortive French efforts to establish a foothold there in the sixteenth century (immortalized in the 1591 De Bry/ Le Moyne map of Florida, these efforts had ended by 1565). France continued to lay claim to the region between the Santee River and the St. Marys River until the 1763 Treaty of Paris. The region nonetheless, did become home to a significant diaspora of French Huguenots, some of whom would rise to positions of prominence during the American Revolutionary War (1775 - 1783). Late seventeenth and early eighteenth-century English maps, in particular, scarcely noted the French claims. The apocryphal lakes shown here amongst the Apalachi Montes were also preserved from the 1591 De Bry / Le Moyne map.

This map was engraved by Jean Somer for separate publication, and for later inclusion in Les Cartes Generales de Toutes le Parties du Monde, the 1658 atlas jointly published by Nicolas Sanson and Pierre Mariette. The map exists in four states, of which this is the first, notably exhibiting the Rue S. Jacque address in the cartouche. In various states, thirteen examples of the separate map are listed in OCLC.