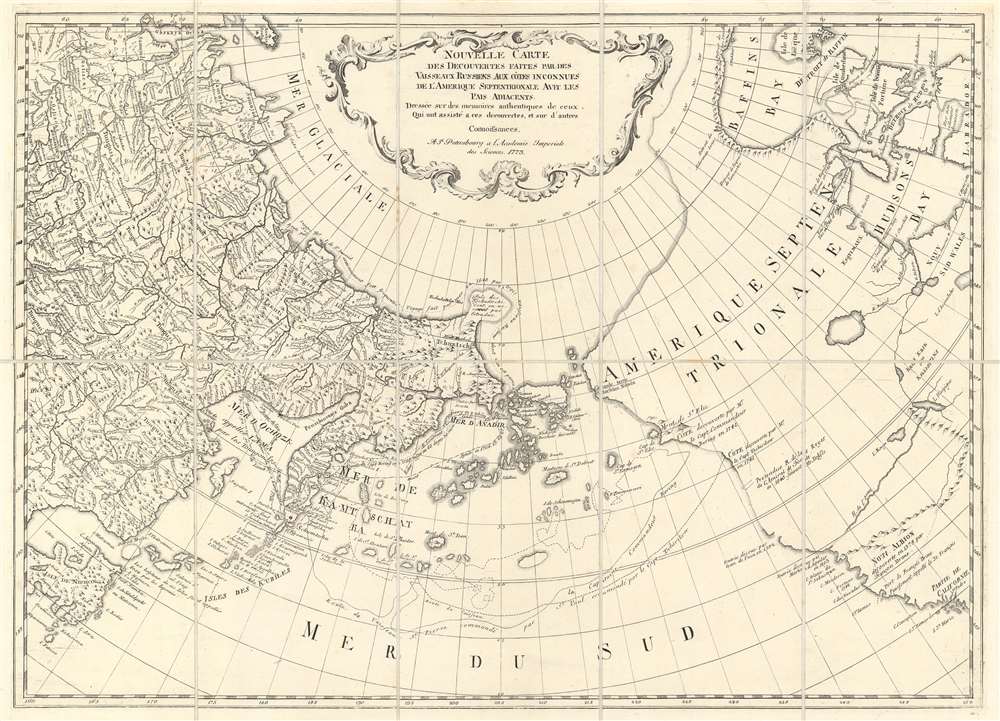 An updated version of Muller's iconic map of the discoveries of Vitus Bering.

This is a 1773 Jacob von Staehlin map of the Pacific Northwest, the Arctic, and Siberia, which has been updated from Fredrick Muller's iconic 1754 map of the same region illustrating the findings of Vitus Bering's Great Northern Expedition. The map depicts from eastern Novaya Zemlya (Nowaja Semlja) to Hudson Bay and from the Arctic Ocean to California and Honshu, Japan. Von Staehlin's map includes a depiction of an archipelago in the place of Muller's namesake peninsula, which, although inaccurate, is closer to the real geography of the region. The Aleutians are illustrated as a string of islands emitting from a larger island which, although not connected to North America, certainly appears to be a proto-Alaska.

This Map's Complicated History - Fredrick Muller's Map and its Derivatives

The original map upon which this is based, published in 1754, was the first official map to reflect the results of Vitus Bering's Great Northern Expedition. The Great Northern Expedition was one of the largest and best organized voyages of exploration, the results of which completely remapped most of the Arctic coast of Siberia and some parts of the Northwest coast of America, filling in vast amounts of previously unknown coastal details, which previously had been the subject of myth and speculation. Originally conceived by Russian Emperor Peter I the Great, the exploration was undertaken under the auspices of Russian Empresses Anna and Elizabeth, under the direction of Vitus Bering. Lasting from 1733 - 1743, the expedition was intended to map the eastern reaches of Siberia and the Northwest Coast of America. Its many accomplishments include the European discovery of Alaska, the Aleutian Islands, the Commander Islands, and Bering Island, as well as a detailed mapping of the northern and north-eastern coast of Russia and the Kuril Islands. The expedition formally ended the myth of a massive land mass (Lumaria) in the North Pacific.

Following the Behring expedition, Joseph Nicholas de L'Isle, younger brother of the major French cartographer Guillaume de L'Isle, privately published (along with Nicholas Buache) his interpretation of The Great Northern Expedition's discoveries. J. N. de L'Isle was employed by the Royal Academy in Sy. Petersburg at the time, but upon his brother's death, quit the position and returned to Paris. He partnered with Nicholas Buache to publish a wildly speculative map of the Pacific Northwest that did much to popularize the mythical of the Sea of the West.

The map went through several issues, each with updates. The 1758 edition adds a route across the Mer D'Ochozk, but is otherwise largely unchanged from the 1754 edition. The first major revision appeared in 1773, when Jacob van Staehlin revisited the Muller map in light of new discoveries from 1764 onwards by Russian explorers (Ivan Synd) as well as Russian fur merchants (Promyshlenniki) navigating in the region. Van Staehlin removed Muller's peninsula, replacing it with a series of small islands surrounding a larger island. Although still inaccurate, the archipelago here is far closer to the Aleutians and the Alaskan mainland than any previous map.

The map was subsequently pirated by the Italian cartographers Santini and Remondini, who issued a version in 1774 and another in 1784.

All Muller maps and their derivatives do not include N. de L'Isle's mythical 'Sea of the West,' although he does continue to hold out hope for a water route from the Pacific Ocean to the Atlantic Ocean via tentatively located 'R. de l'Ouest' connecting the northern California coast to Hudson's Bay. Streeter notes that Muller's map confirmed the existence of a body of water between Asia and America, the subject of much dispute during the previous two hundred years. It also showed the Kuril Islands correctly and suggested the outline of Alaska and the Aleutian archipelago.

Another feature of extreme interest is the ghosted bulbous peninsula identified as Tschuktschi in northeastern Siberia. Earlier versions of this were known as Witsen’s Peninsula. This oddity appears in various forms on numerous maps dating from the late 17th and early 19th century. It is a legacy of Peter the Great's obsession over the search for a Northeast Passage. Around 1648, the Cossack Semen Ivanovich Dezhnyov (1605 - 1673) put together a rough and ready expedition to explore the region. His company consisted of Fedot Alekseyev, traveling with the merchants Andreev and Afstaf'iev (representing the Guselnikov merchant house), who provided their own ship, and Gerasim Ankudinov, an experienced sea captain with his own ship and some 30 men. Dezhnev, along with Mikhail Stadukhin, recruited some 19 men of their own and procured a traditional kocha ship. Including escort vessels, a total seven ships sailed from the mouth the Kolyma River, along the Siberian Arctic, to the Anadyr River north of Kamchatka, and in doing so became the first Europeans to sail through the Bering Strait some 80 years before Vitus Bering. Dezhnyov described rounding a large mountainous promontory identified as Chukchi, Tschuktschi, or Chukotka Peninsula. Of the seven vessels the multiple leaders, only three ships, including Dezhnev’s, survived the passage.

Dezhnyov ultimately proved that there was indeed a nautical route from Russia to East Asia, but at the same time confirmed that it was exceedingly impractical for trade. Nonetheless, his promontory was subsequently embraced by European cartographers who, lacking serious scientific data from the Dezhnyov expedition, surmised the form. The first of these was Dutchman Nicholaas Witsen, who prepared a map in 1687 based upon Dezhnyov's records that he discovered on a 1665 trip to Moscow – hence the term 'Witsen's Peninsula'. Many cartographers followed suit, and some even went so far as to suggest that this landmass may actually be connected to America. Dezhnyov's actual reports were rediscovered by Gerhardt Friedrich Muller who published them in 1758 and incorporated them into his own influential map of the Siberian Arctic.

Technically, from the Russian perspective, Alaska (Alaschka¬), which was derived from the Aleut 'alaxsxaq' meant 'object toward which the action of the sea is directed,' 'great continent' or, quite basically, 'the mainland.' The notion that it might have been an island seems to extend from reports by Russian traders and military officers. Specifically, in 1768, Krenitsyn and Levashev, Russian naval officers, wrote of a large island called 'Alaxa' northeast of Unimak Island referenced by Alaskan natives as the 'Island of Alaschka.' Staehlin applied these reports to reconcile anomalies on the Japanese map acquired by the German naturalist, physician, and orientalist Engelbert Kaempfer. This Japanese map shows an unnamed island in the vicinity of Alaska, which Staehlin expands in size and reorients to correspond to lands discovered by Gvozdef in the wake of the Bering-Chirikov expedition. The other islands, some of which are named, and some of which are not, are derived from the reports of Captain Ivan Sindt (Sindo). Sindt sailed with Bering and later, in 1768, led his own expedition to the region. As some have suggested he seems to have greatly exaggerated both the size and quantity of the islands he encountered. Staehlin used this to fill in the blanks between the Kaempfer Japanese map and the Bering maps.

Apart from Mount St. Elias and a reference to New Albion, North America is mostly blank. New Albion was the name given to the area north of Mexico that Sir Francis Drake claimed for England in 1579. As stated above, De L'Isle's apocryphal Sea of the West is not present, but the 'Riviere de l'Ouest' is, which maintains the hope for the existence of a Northwest Passage from the Atlantic to the Pacific. Mount Saint Elias, however, was first sighted by Europeans when Bering discovered it on July 16, 1741.

This map was created by Jacob von Staehlin and published by the St. Petersburg Academy of Sciences in 1773. This map is very rare, with only one known example in the collection of the John Carter Brown Library on the campus of Brown University.

Jacob von Staehlin (May 9, 1709 - June 25, 1785) was a German-Russian polymath known as an engraver, cartographer, memoirist, full state councilor, and member of the Russian Academy of Sciences. Born in Memmingen, Upper Swwabia, von Staehlin attended the University of Leipzig and, in 1735, was called to St. Petersburg to work for the St. Petersburg Academy. He became a member of the Academy and a professor of 'eloquence and poetry' in 1738 and in 1741 took over the Department of Art at the Academy. He was appointed teacher to the heir to the Russian throne, Peter Fedorovich, in 1742, and after his wedding was named his personal librarian. Staehlin helped with the creation of the First Atlas of the Russian Empire, which was published in 1745. The art department was changed into the Academy of Fine Arts in 1747, and Staehlin was was entrusted with its management, and even developed drawing and engraving programs. Staehlin died in St. Petersburg in 1785.

Very good. Dissected and mounted on linen in 10 panels. Blank on verso.

John Carter Brown Library Cabinet Cl773 / 1.
Looking for a high-resolution scan of this?