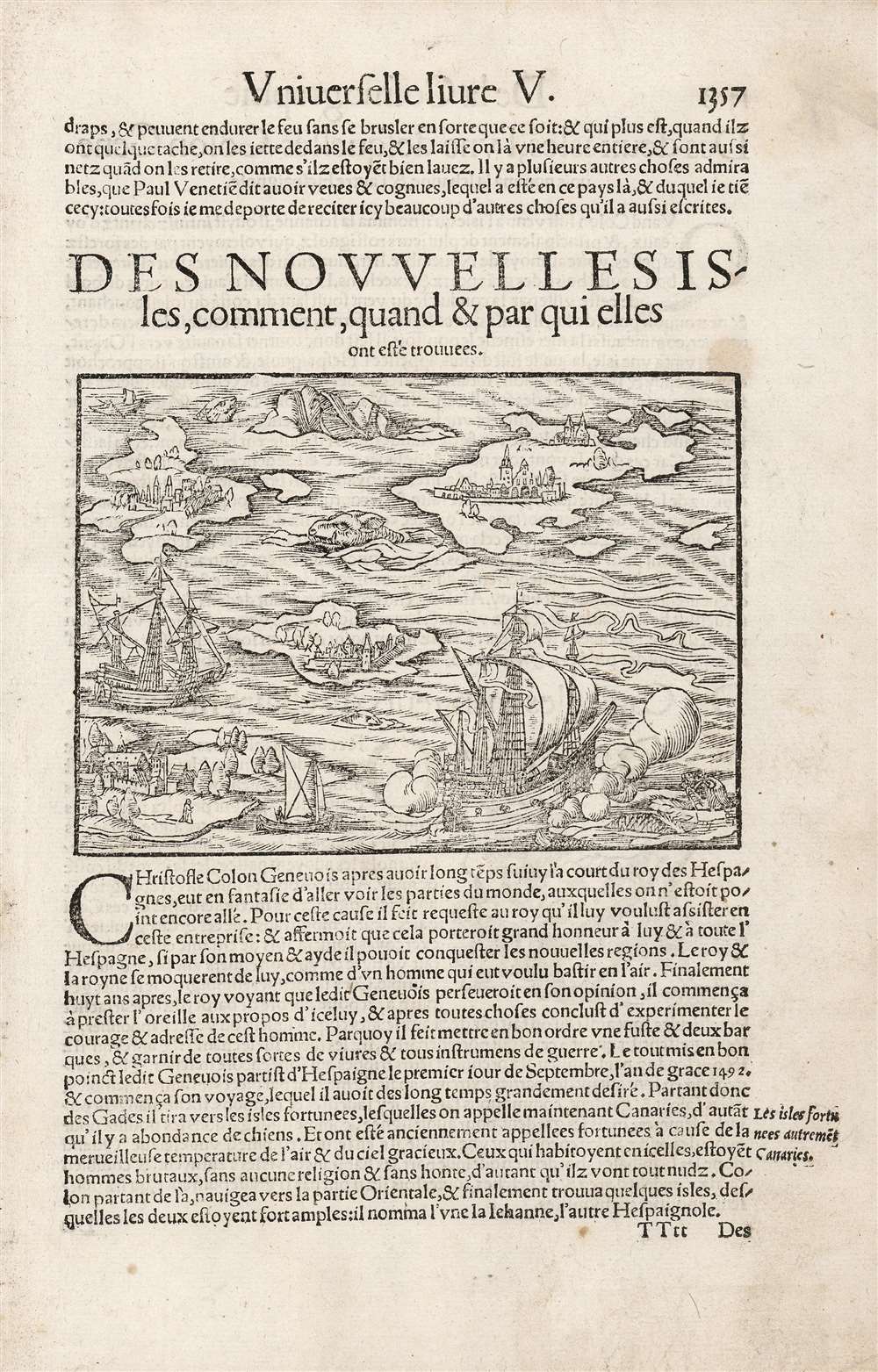 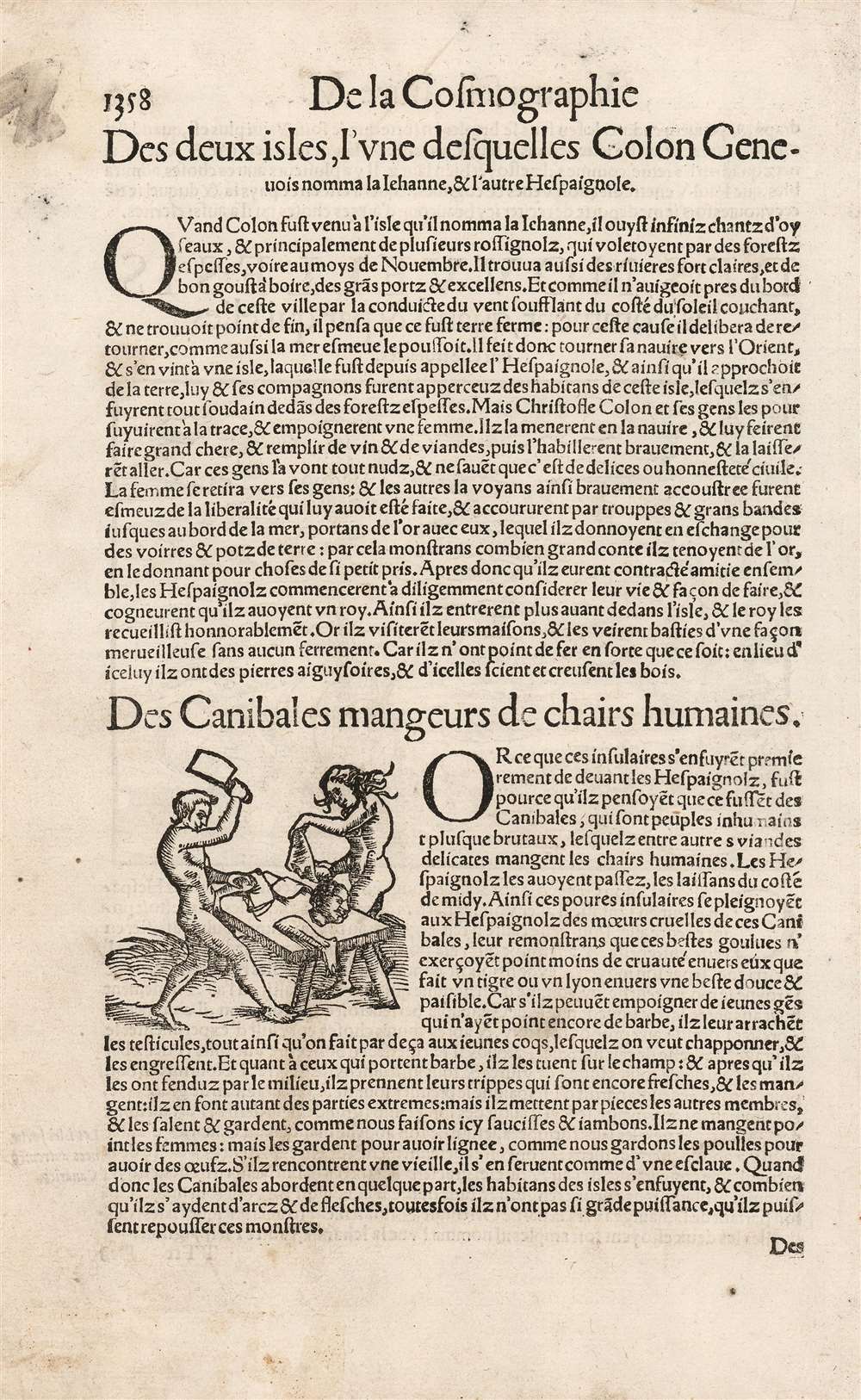 An Evocative Image of the Age of Discovery.

This is a fascinating and evocative woodcut image of islands, ships and sea monsters, illustrating a text describing Christopher Columbus’ 1492 voyage across the Atlantic. It appeared in Sebastian Münster's Cosmographia beginning in 1550, and appears here in an early French text edition of the work.

Here depicted is an archipelago, surrounded with turbulent seas. Some of the islands appear to be forbiddingly rocky, while others are peppered with trees and hills, some graced with European-styled walled cities. Several sea monsters prowl the archipelago, one resembling a giant sea-hog, and a sea serpent menacing a sailing ship, which fires its cannon to drive the monster away. Two small sailboats, and another great sailing ship also sail between the islands. From one of the islands, a robed figure approaches the shore, as if to greet one of the sailing craft. There is nothing in the image to indicate any specific location, and none of the details in the image correspond directly to any of the details in the accompanying text. So on its own, it would be incorrect to describe this as a literal representation of any specific place. Rather, it is an imaginative representation of sea voyages, the dangers associated with them, and the wonders that might be encountered. In the context of the text, however, this assessment changes slightly.

In the editions of Cosmographia in which this image appeared, it appeared twice: here, opening of the chapter pertaining to the New World: Des Nouvelles Isles, comment, quand et par qui ells ont este trouvees. ('The New Islands, how, when, and by whom they were found. '). That text describes Columbus' courting of the King and Queen of Spain, and the start of his 1492 voyage - first from Cadiz to the Canary Islands, thence crossing the Atlantic to find the Island of St. John (Puerto Rico) and Hispaniola. And so while the image attending this text is primarily an imaginary work, it is here employed to illustrate a voyage amongst several specific islands, and was intended to evoke the wonder associated with those discoveries. The other appearance of this illustration accompanied the text describing islands in general, defining the concept and providing a wide variety of examples (including Rhodes, Sicily, and Cyprus.)

The French verso text continues in a description of Columbus’ capture of Puerto Rico (La Jehanne) and Hispaniola – followed by a lurid description of the cannibals, 'an inhuman people, beyond brutal, which among other meats, eat human flesh.' An accompanying woodcut (in which two naked figures employ cleaver and carving knife at a table cluttered with human body parts) provides emphasis.

This woodcut was executed by an anonymous formschneider for inclusion in the 1550 editions of Münster's Cosmographia and would remain in the work in every edition up to 1628. The book’s many editions are well represented in institutional collections. While this image is cataloged separately only once in OCLC, it appears on the market from time to time.