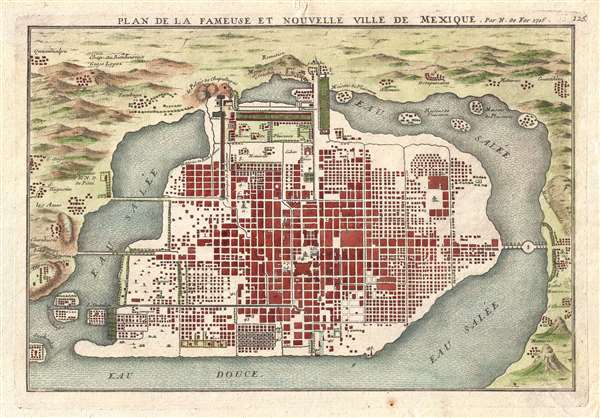 Map of Mexico City before the draining of Lake Texcoco.

This is a 1715 Nicolas de Fer city map or plan of Mexico City, Mexico. Although somewhat hard to correlate to the sprawling modern day Mexico City, this map illustrates Mexico shortly after being constructed from the ruins of the razed Aztec capital of Tenochtitlan to be the capital of Spain's Viceroyalty in the New World. The map is oriented with east at the top. The Zocalo and the Cathedral, which was consecrated in 1667, appears at center, and Chapultepec hill is labeled at top center. The grid structure radiating out form the Zocalo is roughly similar to the Centro Historico's modern day grid, though quickly transitions to smaller dwellings and undeveloped land the farther one gets from the Zocalo. Forty-one different locations are numerically identified throughout the city. Individual buildings, both within the city and in the villages surrounding the lake, are illustrated, along with the causeways connecting the island with the 'mainland'. The villages surrounding the lake are also labeled.

The city here is surrounded by a great lake. This is the original Lake Texcoco upon which the ancient Aztec capital of Tenochtitlan was constructed. By building the Spanish colonial capital on the ruins of the center of Aztec political, religious, and commercial life, Cortés cemented his conquest in the minds of the indigenous people. Tenochtitlan, and by extension Mexico City, was founded on an island in the middle of a large inland lake, meaning that the city was essentially surrounded by water. This fact led to serious public health issues during the colonial period, because Cortés destroyed the Aztec drainage system when he built Mexico City. After suffering numerous floods, city officials began to work through the problem and instituted a program of using indigenous labor to build a drainage system. This project, however, was never fully completed under Spanish rule and would never be fully realized. By the nineteenth century, as the population of the city increased, the need for more space became apparent. This new pressure, combined with the constant flooding, led the government to drain the lake surrounding Mexico City. This solution solved both problems by creating more land for people to live on and ending, for the most part, the flooding.

This map is rather uncommon as it was published only in the Suite de l'Atlas Curieux, which was a supplement to De Fer's better known Atlas Curieux. Accompanied by original backmatter.