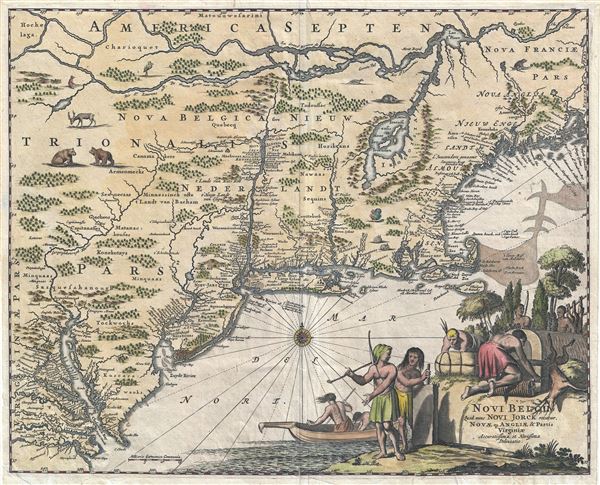 The first map in the Visscher-Jansson Series to identify New York, New Jersey, and Albany.

A very attractive example of Arnoldus Montanus and John Ogilby's 1671 important map of New York, Virginia, New Jersey, and New England - the first in the Jansson-Visscher series to use British nomenclature. Part of the Jansson-Visscher Series (maps derived from the Visscher Map of 1655), this map covers from the St. Lawrence to the mouth of the Chesapeake Bay, and from the Chesapeake Bay estuaries, past New Jersey , Long Island, and Cape Cod, as far east as the Penobscot River. The map offers considerable detail throughout, including an updated nomenclature reflecting the 1667 Treaty of Breda, in which the Dutch surrendered New York to the British in favor of the East Indian Island of Run, then the only known source for nutmeg. The map identifies Nova Albania (Albany), Nieu-Jarsey (New Jersey), Nieu Jorck (New York, shown with fortifications), and Iamaica (Jamaica, Queens). This is notably the first map in the Jansson-Visscher series in which these names appear.

Montanus and Ogilby's map also features many of the flaws common to the series. Lake Champlain, named here Irocoisia, appears far to the east of its actual location. The St. Lawrence runs too far south, and there is no suggestion of the Great Lakes. The North Fork of long island is weekly mapped.

In a nod to Willem Blaeu's 1635 Nova Belgica the lands are decorated with vignette illustrations of various fauna indigenous to the Americas. These include two bear, a dear, a fox, several beaver, a crane, a muskrat, two rabbits, and a turkey. The lower right quadrant features an elaborate cartouche illustrating American Indians engaged with various tasks from skinning animals, to fishing, to bundling furs, and firing clay.

There is some minor confusion over the use of the term 'Novi Belgii' next to the term 'Nieuw Nederlandt' in most maps from the Jansson-Visscher series. This is a simple linguistic doubling. The term appears in both Latin and Dutch. There was no Latin for the Dutch term Niew Netherland (Nieuw Nederlandt), so Novi Belgii was used instead.

The map above represents the first state of this map, engraved by John Ogilby and published in Arnoldus Montanus's 1671 Die Nieuwe en Onbekende Weereld. There were two subsequent states. The second state was issued by Van der Aa and appeared c. 1729. A third state, issued in 1761 (note the curious inversion, first edition 1671, last edition 1761), was prepared in Amsterdam by Covens and Mortier.


John Ogilby (November 17, 1600 - 1676) was a Scottish translator and cartographer. John Ogilby's life seems to be one of extremes, teetering between wealth and poverty, success and failure. Ogilby was born near Edinburgh, Scotland, into a once wealthy family laid low by extreme debt. Struggling with poverty at every turn, Ogilby involved himself in various businesses ranging from dancing master, to actor, to tutor. In 1612, at age 12, Ogilby won a lottery run to advance the colonial interests of Virginia. His winning were sufficient to pay of many of his father's debts and apprentice himself to a dancing master. Ogilby proved a natural and graceful dancer and even made extra money tutoring his fellow apprentices. Starcrossed as he was, Olgiby's dancing career ended when a misstep when a misstep at a masked ball injured his leg and left him lame for live. Afterwards he managed to leverage his contacts in the dance world to secure a position as a dance instructor to the daughters of Sir Ralph Hopton. Hopton struck an immediate friendship with Olgiby and trained him in Military Science. Later Ogilby relocated to Ireland where he worked an as actor and later as Master of Revels. The Irish Rebellion of 1641 again dashed Ogilby's fortunes and forced him to flee Dublin by ship. On the way, the ship sunk but the survivors were rescued and eventually made their way to England, which was then under the strict rule of Oliver Cromwell. Ogilby took refuge at Cambridge where he mastered Greek and Latin. Following the Restoration of Charles II, Ogilby invested in his first major literary venture, a translation of Virgil into English. This work earned him the patronage of Charles II, despite the ridicule of prominent poets Dryden and Pope. Under Royal patronage Ogilby published several volumes relating to the Restoration. In short order he has established a successful London publisher based out of the Whitefriars district. This, unfortunately turned out to be a fateful choice of location as in 1666 the Great Fire of London tore through this are destroying Ogilby's publishing stock, home, and business. Once again Ogilby exhibited a remarkable phoenix-like ability to literally rise from the ashes. Shortly after the Great Fire, he began his most important ventures as a publisher of geographical works. In order to recover from the fire, Ogilby and his grandson were took positions as surveyors commissioned to create a large property map of London. The resultant map of London, "London Survey'd", was published in 1677 and earned Ogilby the honorific "Kings Cosmographer and Geographic Printer". His most famous works are his 1675 Road Atlas of England, Britannia which redefined road mapping, and his 1671 Atlas of the Americas. Learn More...