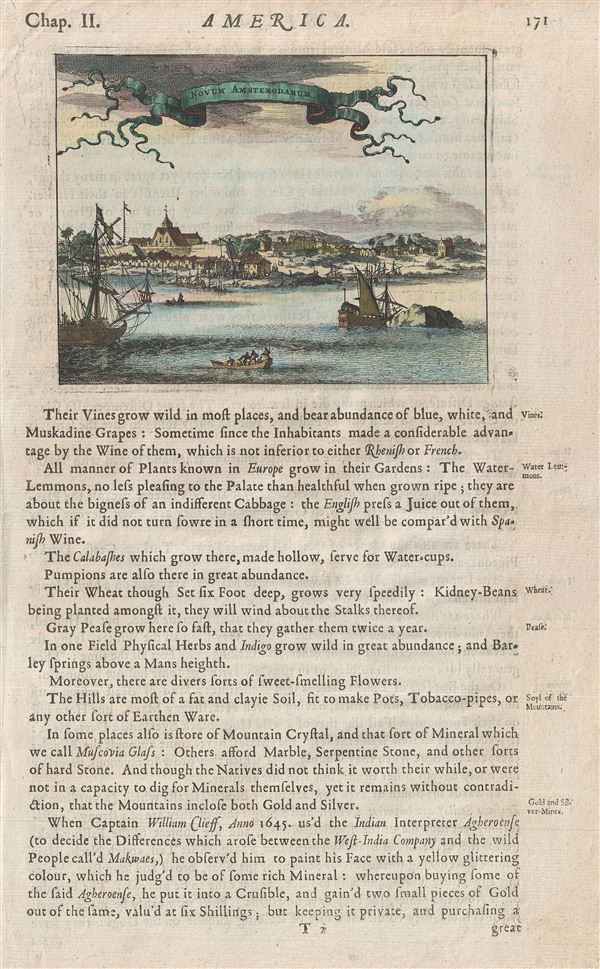 One of the earliest obtainable views of New York City or, as it was, New Amsterdam.

A fine example of John Ogilby's 1671 view of New Amsterdam, one of the earliest obtainable depictions of New York City. Prepared for Ogilby's America, this vies is mostly likely based on a very similar watercolor completed by Laurens Hermansz Block in 1650 or 1651. Block Visited New York aboard the merchant ship Lydia and the view here most likely reveals the city either on Block's arrival in 1650 or departure in 1651. The original watercolor has survived and is currently in the collection of the New York Historical Society. Text below the map describes the wonders of the New World, tacitly inviting colonists to partake.

The view shows New Amsterdam as a tiny but seemingly prosperous settlement with the windmill and prominent church dominating the scene while merchant ships fill the foreground harbor. In fact, New Amsterdam languished under the neglect of the Dutch West India Company, who was more focused on its war with Portugal in South America. It was not until 1664, when the settlement was sized by the British, who renamed it New York, in honor the Duke of York, later James II King of england, that the city began to prosper. The British proved to be superior colonial managers and, by the time Ogilby published his America edited and updated from the Dutch version by Arnold Montanus, the population had swelled to some four hundred households – making it one of the largest settlements in North America – and gained the protection of James Fort .