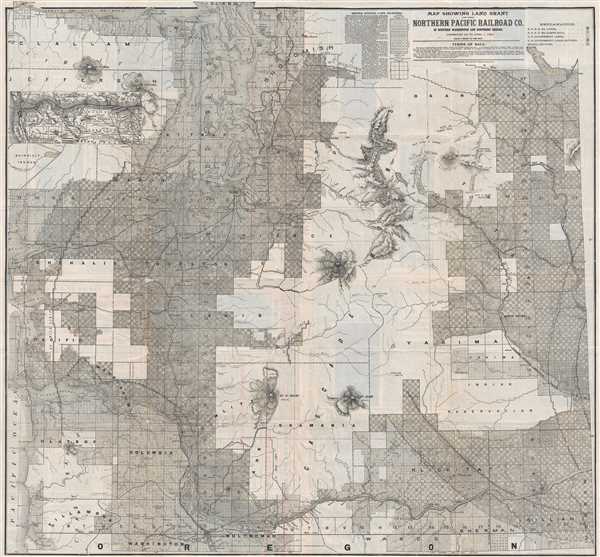 Illustrates the vast amounts of land available for purchase from the Northern Pacific Railroad.

Several cities and towns are labeled throughout, including Tacoma, Seattle, Olympia, and Vancouver, Washington, and Portland, Oregon. Numerous other small towns are also labeled. The Cascade Mountains traverse the map just to the right of center, creating a swath of land not divided into townships. Mt. Adams, Mt. St. Helens, and Mt. Tacoma are all labeled, along with several mountain passes and various mines extracting different resources from the mountains. An inset map, illustrating the route of the Northern Pacific Railroad from Minneapolia-St. Paul to Portland, Tacoma, and Seattle, along with the route of the Oregon and California Railroad, is situated along the left border.

As is stated in the condition statement, this map has been backed on archival tissue for stability. Even so, all of the verso content is legible. Features of the verso include in-depth descriptions of the Western and Central Washington, along with detailed descriptions of different regions within those two areas. Details concerning mining, logging, and other industries are also provided. Advice for prospective settlers on how to begin their journey and where to look for land for their new homestead is included as well, along with the sincere belief (per the Northern Pacific Railroad) that the best way to reach Washington and Oregon is by rail operated by the Northern Pacific Railroad from Minneapolis-St. Paul. Information on land pricing and terms can also be found.

This map was produced and published by Matthews, Northrup, and Company of Buffalo, New York for the Northern Pacific Railroad and corrected up to April 1, 1890.

Very good. Wear along original fold lines. Backed on archival tissue for stability. Text on verso.
Looking for a high-resolution scan of this?