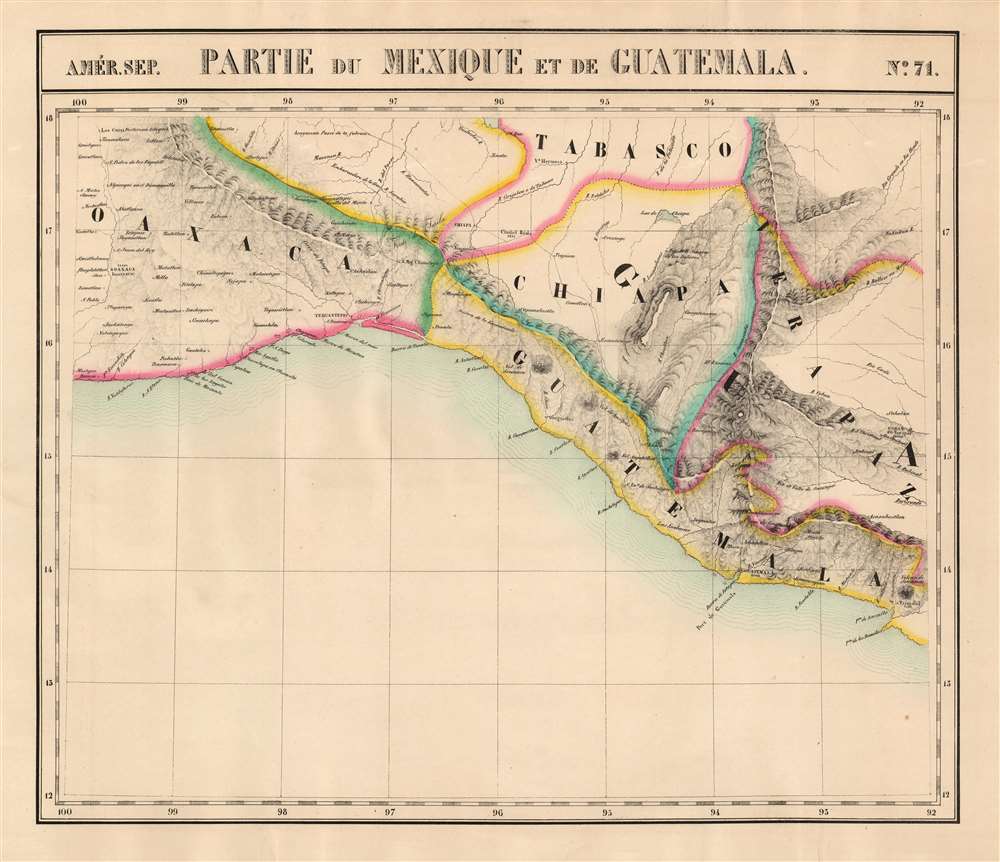 This is the 1827 Vandermaelen map of the southern part of Mexico and the western part of Guatemala. Vandermaelen's Atlas Universel was the first lithograph atlas as well as the first whose maps were printed on a universal scale. The present map was the first lithograph map of its region, and it is the earliest map to focus so narrowly on the states of Chiapas and Oaxaca. The map also includes the southern part of Tabasco, part of Veracruz, and part of Guatemala. The precursor map for the Vandermaelen is primarily Arrowsmith's 1810 A New Map of Mexico and Adjacent Provinces Compiled from Original Documents, which was one of the first maps to present Alexander von Humboldt's mapping of Mexico. Most of Humboldt's place names were preserved (and more clearly presented) in the Arrowsmith map.

The state of Oaxaca is shown from Mixtepec and Bajos de Chila on the Pacific Coast, and as far north as San Juan de los Cues (which is noted as an Aztec ruin). In addition to the city of Oaxaca, the map notes Puerto Escondido, Mazunte, Tehuantepec, San Miguel Chimalapa, and many other towns. While the mountains between central Oaxaca and the coast are only hinted at, the region's Sierra Norte is dramatically depicted - continuing well to the south as the Sierra Madre de Chiapas.

Throughout the colonial period, both the future states of Tabasco and Chiapas had a thin European population, and consequently were extremely poorly understood geographically. This condition continued into the early Independence period, leading to both a lack of data in the maps of that period and considerable errors. In spite of this, Vandermaelen's map captures a crucial and sometimes baffling historical period for the region. Although these areas would become part of Mexico following independence, Vandermaelen's map clearly marks Chiapas, neighboring Verapaz, and coastal Chiapas as part of Guatemala. This is consistent with the 1810 Arrowsmith It later appeared this way in the 1828 Disturnell map of Mexico: thus Vandermaelen reflects the state of the art of the mapping of this fluid border region. During the colonial era, Chiapas was part of Captaincy General of Guatemala. Following independence, some Chiapas merchants in Chiapanecan towns attempted to establish a separate Chiapas; while others favored unification with Guatemala, particularly in Soconusco. Elites in the cities of the highlands, such as Comitán, Ciudad Real, and Chiapa, preferred Mexico. Chiapas was declared part of Mexico in 1822. Briefly in 1823, Chiapas had declared independence from Mexico. In 1824 Soconusco split to join the Central American Federation with Guatemala, a situation that would maintain until 1844.

A surprising feature of this map is the placement of the upper Rio Grijalva de Tabasco within the borders of Tabasco state, including Chiapas' primary cities (Chiapa and Ciudad Real.) This does not occur on the Arrowsmith: that map puts Chiapas' western border along the Grijalva. The 1825 Brue Carte general des Etats-Unis Mexicains presents the Chiapas border as here. This broad disagreement with respect to the border is in part caused by confusion of all mapmakers as to the actual location of the key cities in Chiapas, and the course of the Grijalva River. All maps of this period, including Humboldt, place both Chiapa (Tuxtla) and Ciudad Real (San Cristobal de las Casas) far to the west of their actual locations, well to the west of Villahermosa. In addition to this, Vandermaelen compounds these errors by putting the whole valley of the Rio Grijalva within Tabasco's borders, thus absorbing the misplaced Chiapanecan cities. This combined with the confusion which attended the region's independence from Spain and the changing alignment of Chiapas from the Guatemalan to the Mexican sphere of influence.

Among the notable features of the map is the depiction of a long strip of land, separating Chiapas from the coastline, here designated as part of Guatemala. This coastal region lying between the Sierra Madre de Chiapas mountains and the Pacific Ocean is called Soconusco. It is now the southernmost part of the Mexican state of Chiapas, but for many years was a separate province of the Captaincy General of Guatemala (as was Chiapas itself, as is indicated on the present map.) The area was absorbed by Chiapas in 1790. Soconusco and Chiapas would be among the first provinces in the region to support separation from Spain, declaring their independence in 1821. Afterwards, there was disagreement on whether to join with Mexico or the Central American Republic. Disregarding local opinion, Mexico annexed Chiapas in 1824 and formally claimed Soconusco in 1825. Neither Soconusco's elites nor Guatemala accepted the Mexican annexation, and the settlement of this border fluctuated throughout the 19th century. It was not formalized until 1882.

This map appeared in the fourth part, 'Quatrième partie, Amér. sept.' of Vandermaelen's Atlas universel de géographie physique, politique, statistique et minéralogique. The atlas was produced in one edition in 1827; only 810 complete sets were sold. The full set of six volumes appears in eleven institutional collections in OCLC; the 4th volume alone is listed in 9. This map is listed as a separate only in the Getty, the University of Michigan, the University of Florida, and Princeton University.