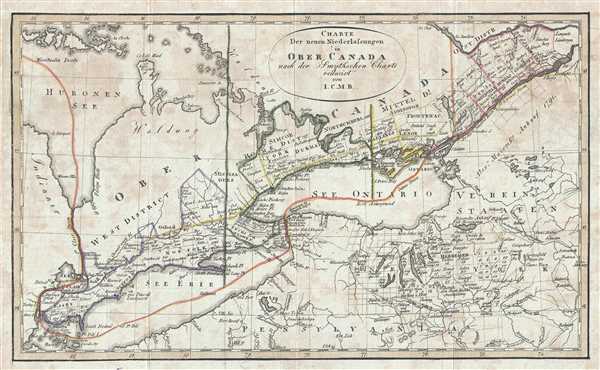 This is an 1820 Franz Pluth and David William Smith map of the province of Upper Canada, or modern-day Ontario, Canada. The map depicts the region from Lake Huron and Detroit to the border between Ontario and Quebec and from Lake Huron and the Ottawa River to Lake Erie, Pennsylvania, and New York. A reduced version of David William Smith's important and groundbreaking map of Upper Canada, it is extremely detailed. The focus of the map is on the districts and townships located along Lake Erie, Lake Ontario, and the St. Lawrence River. Each township would then be further divided in order so that citizens could take possession of small plots of land. Each township is labeled, along with the districts. Districts are distinguished by outlining each one in a different color.

This map was produced in 1820 by Franz Pluth, from the original map published by David William Smith in 1799 and reissued in 1813.

Sir David William Smith (Smyth) (September 4, 1764 - May 9, 1837) was a British army officer, surveyor, public servant, and politician. Born in Salisbury, England to parents John Smith, a career soldier, and Anne Waylen. Smith was commissioned as an ensign in the 5th Foot (later the Northumberland Regiment) in 1779. Following his marriage to Anne O’Reilly in 1788, Smith rejoined the regiment at its post in Detroit in 1790, when the regiment was under the command of his father. Due to his efficiency on the Hesse land board and because he thought the 5th the best-administered regiment in the newly-created province of Upper Canada, Lieutenant Governor John Graves Simcoe made Smith the unauthorized offer of the post of acting deputy surveyor general for the province. The Secretary of State, Henry Dundas, believed that the job could be handled by the three assistant surveyors employed at the time and that they could be directed by the surveyor general at Quebec, thus Smith’s unclear status. Smith accepted, even though the job would be without salary or fees until Smith was confirmed as Surveyor General of Upper Canada on January 1, 1798. Upon receiving this confirmation, Smith immediately resigned from the army. At that point Smith received back salary not only to September 28, 1792, the date of his commission from Simcoe, but also from July 1, 1792, when his service actually began. Smith served as Surveyor General of Upper Canada from 1792 until he left in July 1802. Smith used his position as surveyor to accrue more than 20,000 acres in 21 townships, believed to be some of the best land in the province. He also served as a member of the House of Assembly from August 27 1792 until his departure from Upper Canada, having been elected three times. Even though Smith was a valued member of the administration of Upper Canada (one official was quoted as saying 'Six months of [Smith's] labor is of greater benefit to the Province than as many years of many others), he was denied his request in 1804 to return to the province and become a member of the Legislative Council, due to his unpopularity among some of the large landowners. Upon this refusal, and the fact that he had remarried while in England, Smith gave notice that he was resigning all of his Upper Canadian appointments, the command of the militia, and a list two pages long of minor offices and commissions. Smith issued A short topographical description of his majesty's province of Upper Canada, in North America; to which is annexed a provincial gazetteer in 1799 to accompany A Map of the province of Upper Canada, describing all the new settlements…from Quebec to Lake Huron, which he compiled. The description was reissued with a new map in 1813. Learn More...


Franz Pluth (1800 - 1871) was an engraver based in Prague, the capital of the Kingdom of Bohemia, then part of the Habsburg Austrian Empire. Pluth was born in Prague and most likely died in Zbraslav. He was active as a map engraver until at least 1848. His work is similar in style to that of Karl Ferdinand Weiland, a prolific German engraver, with whom he may have worked. Learn More...