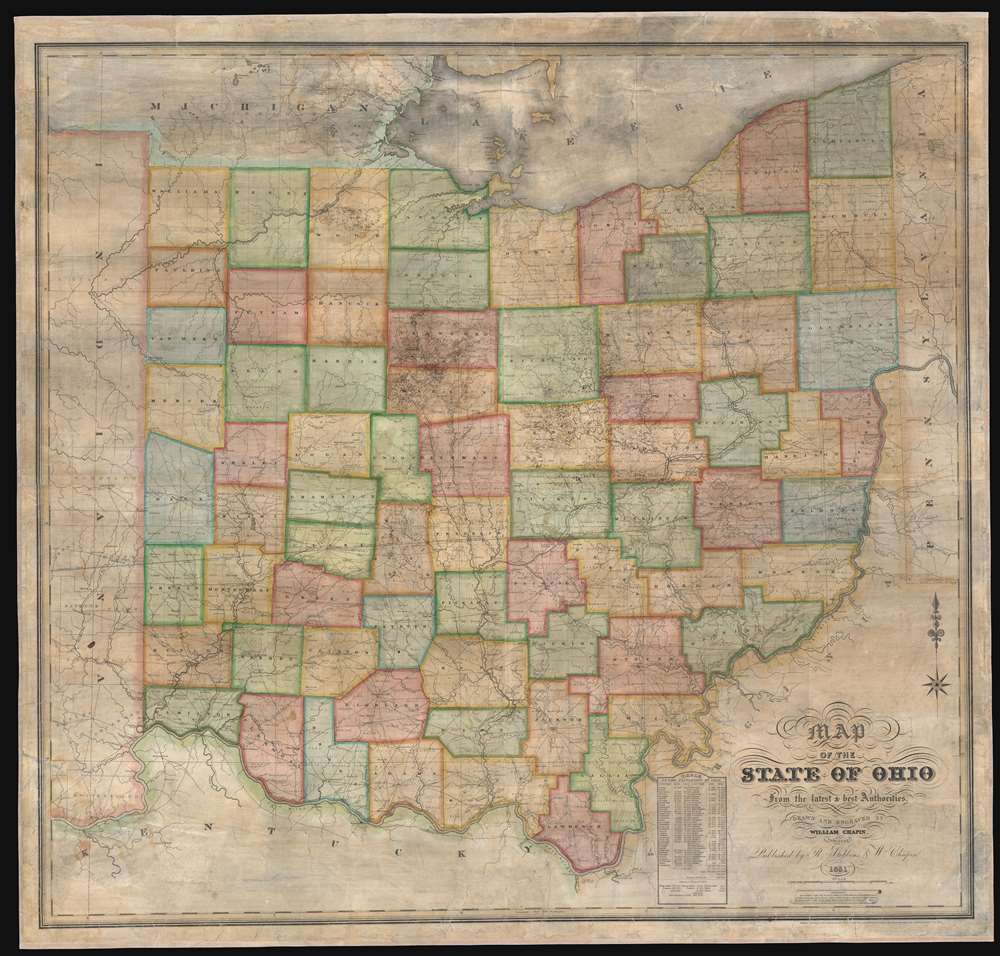 This is an impressively elusive 1831 William Chapin wall map of Ohio - one of the earliest large format wall maps of the state to exhibit a complete county structure. The state's interconnected network of roads and canals is illustrated in detail, including the National Road (then under construction), the Ohio and Erie Canal, and the Miami and Erie Canal. This map supersedes the 1825 John Kilbourne map of Ohio, expanding upon it in terms of completeness, detail, and proportion.

The National Road, begun in 1811 and completed in 1837, was the first major improved highway in the United States. The road, illustrated here by a thin black line, connected the Ohio and Potomac Rivers and stretched from Cumberland, Maryland to Vandalia, Illinois, the Illinois state capital at the time. Construction of the road came to an end when federal funding dried up due to the Panic of 1837. On this particular map the National Road is illustrated in the center of the state, traversing the state from Bridgeport in Belmont County to Lewisburg in Preble County.

The Ohio and Erie Canal

The Ohio and Erie Canal, which began operations two years after this map was published, connected Portsmouth on the Ohio River with the Cuyahoga River near its mouth on Lake Erie in Cleveland. Illustrated here by a solid black line, engineers spent years surveying the route and construction began in 1825. The canal opened in stages, with the first voyage taking place on July 3, 1827 when a canal boat left Akron for Cleveland and arrived the following day. The entire canal system opened in 1832. The canal only carried freight until 1861, after which railroads superseded canals. After 1879, when the canal was reopened after suffering severe flooding, it became apparent that the canal had been poorly maintained, and many sections were filled in and replaced with railroad tracks over its right of way. Today, some of the sections of the former canal serve as state and national recreation areas.

The Miami and Erie Canal

The Miami and Erie Canal, constructed between 1825 and 1845, connected Cincinnati and Toledo and by extension the Ohio River and Lake Erie. With the advent of railroads, the Miami and Erie Canal only operated for a few years, especially since it was completed only just before the railroads. It soon fell into disuse, with much of the original canal ceded to the railroad. Other sections were converted into highways.

This map was drawn and engraved by William Chapin and published by Chapin and R. Stebbins in 1831. Cartographically it is based upon the work of Columbus mapmaker and publisher John Kilbourne. Presently offered is the only known example. It is not catalogued in the OCLC and we have not been able to isolate any other examples in either private collections or sales history. Nor have we found any period reference to the map, copyright records, or promotional, suggesting this map have been a prototype or short-run official map. The only tentative reference we have found is a brief mention in a defunct Ohio Museum periodical that we have been unable to verify. This is a once in a lifetime collecting opportunity for the Ohio buyer.


R. Stebbins (fl. c. 1830 - 1836) was a New York based map publisher active from 1831 to about 1836. He is a very elusive figure, of which little is known. His firm, R. Stebbins and Company, is associated with only one map, an 1835 reissue of Charles Varlé's 1817 map of the United States. His name also appears on a rare 1831 map of Ohio published in partnership with William Chapin, and an 1831 map of the world. He may have some association with the silversmithing firm of Wilson and Stebbins. There are several other publishers of the Stebbins name with whom R. Stebbins may be associated, among the Henry Searls Stebbins (Ohio, 1835 - 1898) and L. Stebbins (Hartford, c. 1856). All of his work is exceedingly rare.

Very good. Full professional restoration including fresh linen backing. Even overall toning. Exhibits some soiling and areas of crackling. Blank on verso.
Looking for a high-resolution scan of this?