1752 Vaugondy Map of the Ancient World in Hemispheres 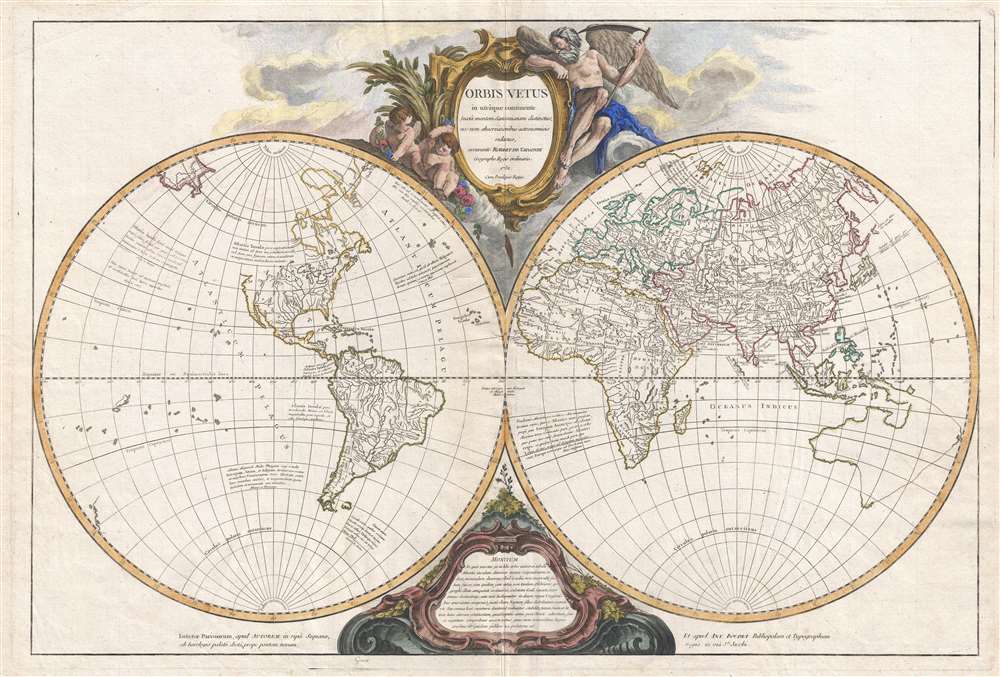 1752 Vaugondy Map of the Ancient World in Hemispheres

Vaugondy's curious attempt to contextualize the New World within the sphere of Hellenic tradition.

This is a striking and impressive 1752 map of the world as known by the Ancients by Gilles Robert de Vaugondy. The map depicts the entire world embraced in two hemispherical projections separated by the Vaugondy firm's distinctive bold cartouche work. This map is a curious work following somewhat on Sanson in that it attempts to express the New World (Americas) within the context of Hellenic tradition. All of the place names in the New World are drawn from ancient Greek mythology with Latin quotations by Plato (Critias and Timaeus), Lucius Annaeus Seneca (Medea, et al), Theopompus, and Claudius Aelianus annotating the Western Hemisphere. The New World itself is identified as 'Atlantis Insula' referring to the lost island civilization first brought to light in Plato's Critias and Timaeus.

Vaugondy identifies two cities in the Americas, Machimo or Bellatrix, which is situated on the site of modern-day Mexico City or Aztec Tenochtitlan, and Eusebes, located at the site the ancient Inca capital of Cusco, Peru. Machimos and Eusebes were, according to Theopompus, the two greatest cities of Hyperborea. Hyperborea itself was mythic sometimes utopic continent inhabited by giants, gods, centaurs, and other beasts of legend. The inhabitants of Machimos were warlike, dominated their neighbors, and rich in gold and other treasures - a not inaccurate descriptions of the Aztec Empire. However, Theopompus also suggests that they were also invulnerable to iron - alas if Vaugondy's placement of Machimos is to be believed history has proven otherwise. The Eusebes, on the other hand were a peaceful and pious people more commonly associated with the utopian Hyperborea. It is said that the Eusebes were free from all disease, though alas, if they were indeed the Inca, history again seems counter to legend.

Aside from the map's curious integration with mythic antiquity, the map is consistent with cartographic conventions of the period. The northwestern part of America is left blank and is fully unknown. South America features a large central lake, an unlabeled apocryphal Lago de Xarayes, at the northern terminus of the Paraguay River. Some of the rivers in Patagonia extend from the Atlantic through the Andes nearly to the shores of the Pacific - suggestive of hopeful dreams of an easy river transit through the continent. Central Africa follows on the Ptolemaic model, with the White Nile terminating in dual lakes at the foot of the Montes Luna (Mountains of the Moon). It is noteworthy that the at least one of these lakes is highly similar in form to Lake Malawi or Lake Tanganyika, though ostensibly these lakes had been neither seen nor heard of by Europeans until the mid-19th century. Australia is vaguely represented with a speculative ghosted eastern coastline that connecting it with Tanzania and New Guinea. New Zealand appears embryonically in the lower left quadrant, but is unlabeled. In the South Pacific, various island groups are presented based upon early Spanish expeditions, such as that of Quiros, but are highly speculative and inaccurate.

Elaborate allegorical cartouche work of a rococo ethic occupies the regions between the Hemispheres. The upper cartouche features the map's title surrounded by allegorical representations of Father Time as a winged bearded angel and two putti. The lower cartouche features a textual explanation of the map in Latin. All in all, a fascinating presentation and one of the highlights of Vaugondy and Boudet's impressive 1757 Atlas Universale.

Rumsey, 3353.001. Pedley, Mary Sponberg Belle et Utile: The Work of the Robert de Vaugondy Family of Mapmakers, 13. Fordham, Studies in Cartobibligraphy p. 165.
Looking for a high-resolution scan of this?