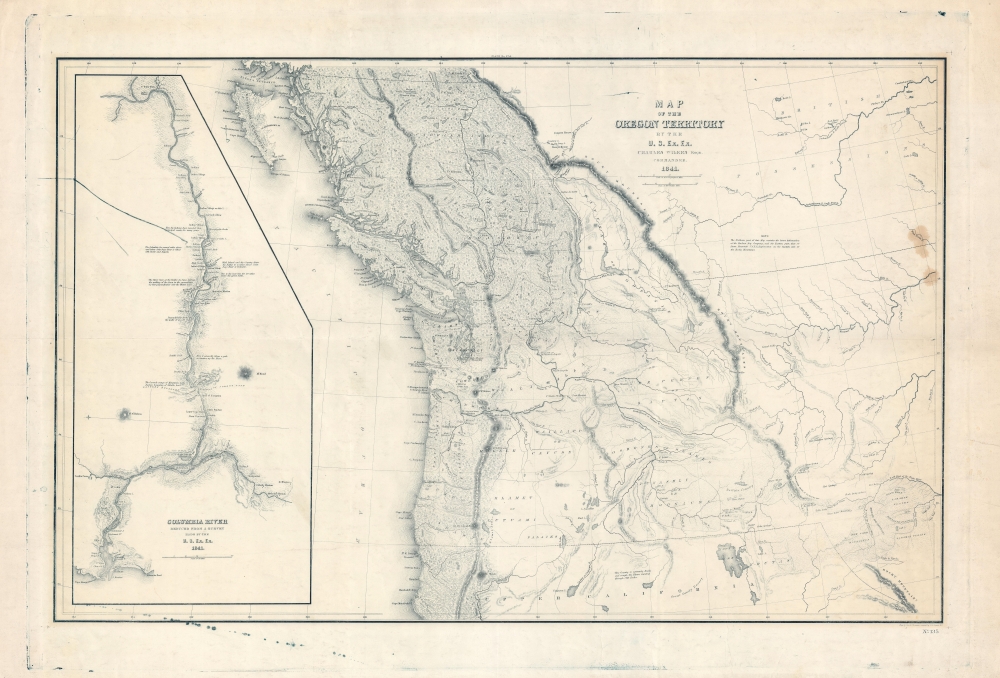 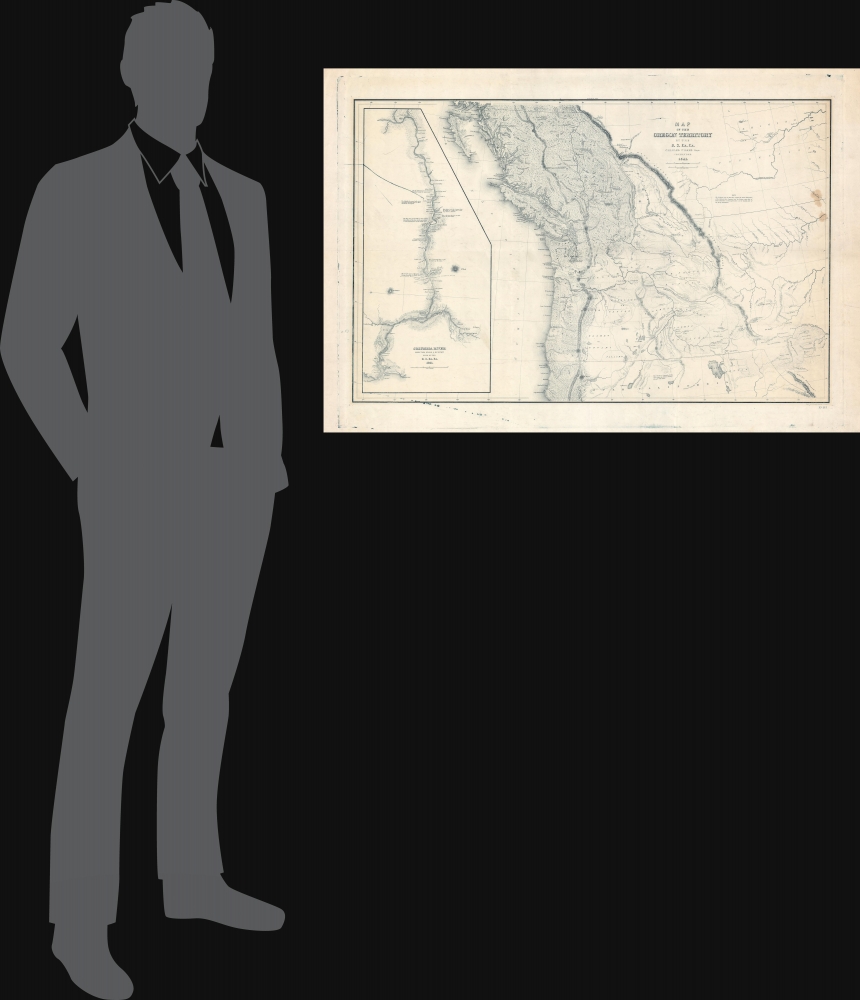 This is the 1871 U.S.H.O. reissue of Commodore Wilkes' 1841 U.S. exploring expedition map of Oregon Territory, the finest and most important map of Oregon of the 19th century. The reissue was prepared from the original copper plate and is on higher quality paper than the original 1841 report issue.

The map covers roughly from the 50th parallel to Mount Shasta, the upper Sacramento River, and Great Salt Lake (Youta Lake) and from the Pacific to the Black Hills. It includes, either in part or full, modern-day Washington, Oregon, British Columbia, Vancouver, Idaho, Utah, Nevada, Montana, Wyoming, and California. A large inset occupying the left quadrants focuses on the Columbia River where the United States exploring expedition lost one of its ships, the Peacock, on the infamous Columbia Bar. Topography is rendered by hachure and the engravers even made some attempt to illustrate the vast pine forests of the Pacific Northwest.

Finest Map of Oregon Yet Published

Wilkes' map was the finest and most detailed map of this largely unknown region yet published and is considered by map historian Carl I. Wheat to be 'really quite extraordinary'. Although dated 1841, this map, like the others from the U.S. Exploring Expedition, was actually published in 1845 with Wilkes' official report. As such, the cartography represented here draws not only on the discoveries of the U.S. Ex. Ex. but also later explorations such as those of Lieutenant Fremont in 1843, the oral records of the Hudson Bay Company, and the remarkable explorations of independent trappers like Jedediah Smith. While of course, much of this map is based on earlier cartographic work by Vancouver, Lewis and Clark, and others, the new information presented here can be divided into four areas:The extraordinary detail presented, nevertheless, can be misleading. The embryonic form of Great Salt Lake (Youta) gives evidence to just how little this area was known. Other errors include the misplacement of various rivers including the Bear River, the Pitts River, and 'Ogdens or Unknown River', among others.

The U.S. Ex. Ex. arrived in the Pacific Northwest at a crucial historical juncture. According to treaties signed in the early 19th century, both Americans and British had equal access to the rich lands of the Pacific Northwest. However, due to their control of John Jacob Astor's former trading post at Fort Astoria and an overwhelming presence in British Columbia, regional dominance generally fell to the British Hudson Bay Company - which often militantly opposed the presence of American fur traders and settlers. Nonetheless, American settlers did begin to penetrate the region in increasing numbers. This only increased tensions, ultimately spurring the '54-40 or Fight' dispute in which American interests, championed by Senator Lewis Linn, advocated for a border at 54° 40' N, far north of its present location. The British, by contrast argued for a more southerly border at the Columbia River. Numerous proposals and counteroffers were fielded by diplomats on both sides. Even so, it was generally accepted that the geography of this region was too poorly understood to suggest a naturally defined border. One of the stated goals of the U.S. Ex. Ex. in the Pacific Northwest was to provide enough cartographic information for diplomats in London and Washington to make an informed decision. Wilkes' report firmly supported Senator Linn's 54-40 border,

the southern border never ought to have been entertained, and cannot be carried into effect without great detriment to our rights, as well as of vast injury to the territory, both as regards its defense, Commercial importance, and to its ever becoming a free and independent state.

Wilkes' map thus places the border at the 54-40 line, extending inland as far as the Rocky Mountains, which it follows southward until meeting the current 49th parallel and extending eastward. A second boundary line, further south, also proved definitive of the future California - Oregon border.

The U.S. Ex. Ex., as it is colloquially known, was one of the most expansive and successful voyages of exploration ever undertaken. Launched at the request of President John Quincy Adam, and under the subsequent presidency of Andrew Jackson, the U.S. Ex. Ex. was led by United States Navy Lieutenant Charles Wilkes.

The expedition launched from Hampton Roads, Virginia in August of 1838, heading across the Atlantic to Madeira. From Maderia it traveled southwest to Rio de Janeiro, then through the Straits of Magellan into the Pacific. Sailing up the coast of South America, it stopped at Valparaíso (Chile) and Callo (Peru). From Callo, it headed west into the Pacific, visiting Tahiti then Samoa, before arriving in Sydney, Australia. After resting in Sydney, the expedition travelled south, mapping the treacherous waters around Antarctica. Leaving the cold Antarctic climes, it then traveled northward, via Fiji, towards the Hawaiian Islands. This marks the midpoint in the journey. After a rest in Honolulu, the expedition sailed to the Pacific Coast of North America, exploring the Puget Sound and the Columbia River, visiting San Francisco Bay, before striking across the Pacific for Polynesia, the Philippines, Borneo, and Singapore. Thence, it cut southwest across the Indian Ocean and around the Cape of Good Hope, before heading northwest to New York, arriving in June of 1842.

Although there was little fanfare announcing its arrival, and Wilkes was hardly lauded as the hero he considered himself to be, the expedition he led was one of the most important and influential scientific expeditions of all time. It circumnavigated the globe, mapping more than 280 islands, exploring 800 miles of the Pacific Northwest Coastline, collected a staggering 60,000 bird and plant specimens, the seeds of 648 plants, and 254 live plants. The expedition significantly advanced the development of 19th-century science, laid the foundation of the American scientific establishment, spurred the founding of the Smithsonian Institution, and had global political ramifications.

This map was prepared by Charles Wilkes and engraved by J. H. Young and Sherman and Smith. Despite being dated 1841, and copyrighted in 1844, it was first published by Lea and Blanchard of Philadelphia to illustrate the atlas volume of the 1845 first edition of Wilkes' official U. S. Ex. Ex. report. The present example is an 1871 reissue printed by the United States Hydrographic Office (U.S.H.O.), identifiable as such by the higher quality paper, wide margins, and the 'No. 135' in the lower right.

James Hamilton Young (December 18, 1792 - c. 1870) was a Scottish-American draughtsman, engraver, and cartographer active in Philadelphia during the first half of the 19th century. Young was born in Avondale, Lanark, Scotland and emigrated to the United States sometime before 1817. Young was a pioneer in American steel plate engraving, a process superior to copper plate engraving due to the increased durability of steel. His earliest known maps date to about 1817, when Young was 25. At the time he was partnered with William Kneass (1780 - 1840), as Kneass, Young and Company, an imprint that was active from 1817 to 1820. He then partnered with with George Delleker, publishing under the imprint of Young and Delleker, active from 1822 to 1823. Young engraved for numerous cartographic publishers in the Philadelphia area, including Anthony Finley, Charles Varle, and Samuel Augustus Mitchell, among others. His most significant work includes maps engraved for for Anthony Finley and later Samuel Augustus Mitchell. Mitchell proved to be Young's most significant collaborator. The pair published numerous maps from about 1831 well into the 1860s. Young retired sometime in the mid to late 1860s. In 1840 he registered a patent for an improved system of setting up typography for printing. ˆˆ Learn More...