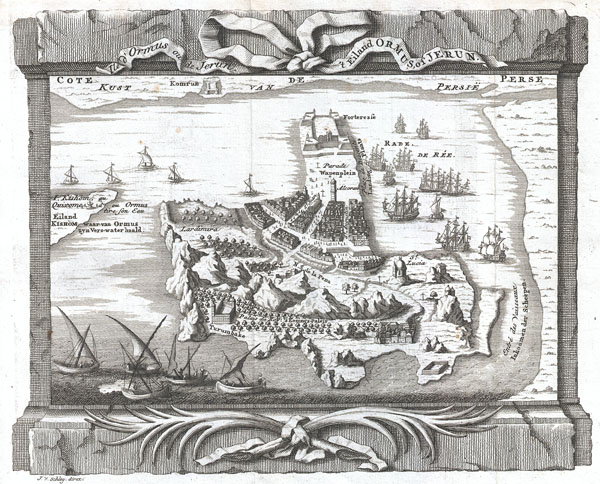 I travelled next from the land of 'Oman to the land of Hurmuz. Hurmuz is a city on the sea-coast, and is also called Mughistan. Opposite it in the sea is New Hurmuz, and between them is a sea passage of three farsakhs. We came to New Hurmuz, which is an island whose city is called Jarawn. -Ibn Batutta

This is Schley's magnificent map of the island city of Hormuz. This strategically important Strait of Hormuz guards the entrance to the Persian Gulf. For centuries Hormuz had been an important stopping point in the shipping lanes from India to Arabia. In the course of its long history, Hormuz was, at various times, an independent state, part of the Arabia, part of Persia and subject to Portugal. Today it is part of Iran. Ormus is mentioned frequently in literature for its legendary wealth and beauty. It is named in the works of Milton, Coleridge, Mandeville, and Ibn Batutta, to name but a few.

Our map shows the island and the nearby Persian coast. Offers stunning detail of the city of Jerun, including orchards, the Palace of the King, the church of St. Lucia, various streets, and the great Fortress. No less than 16 sailing ships ply the waters. Surrounded by a stupendous decorative border with an architectural motif.Engraved by Schley under the supervision of J. Bellin for issue as plate no. 31 in the c. 1750 edition of Provost's L`Histoire Generale des Voyages.

Jacob Van der Schley (1715 - 1779) was a prominent Amsterdam engraver and draftsman based out of Amsterdam. Schley apprenticed under portrait engraver Bernard Picart, whose style he imitated. He is said to have completed several of Picart's portraits following his master's death. While Schley is primarily known for his work as a portraitist and illustrator, he also has a considerable cartographic corpus. He is known to have worked with Bellin, Hondt, and Provost, among others. Learn More...