1898 Smith Map of Cuba, Puerto Rico, and the Philippines 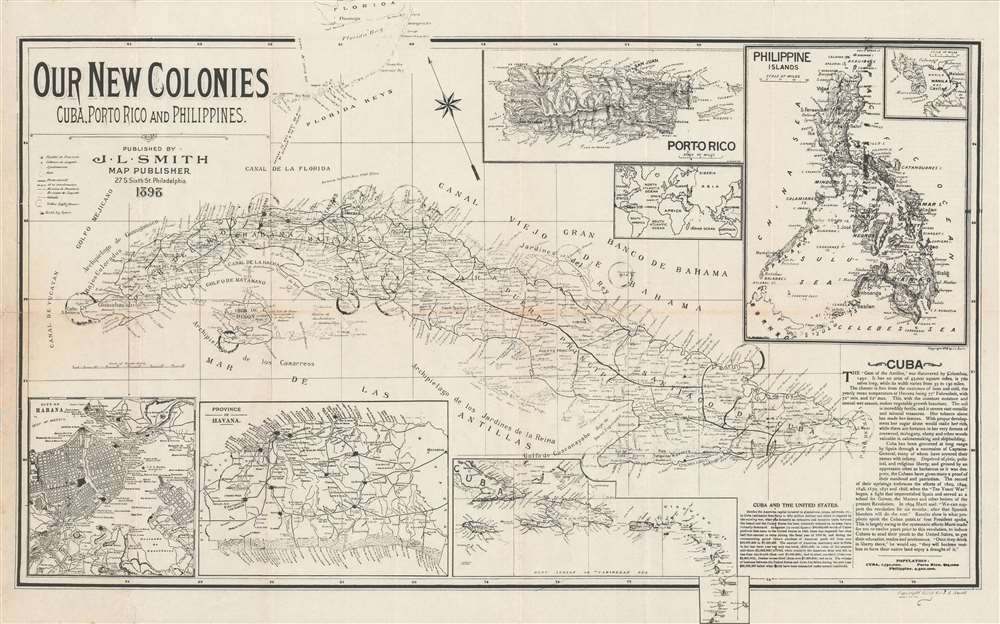 1898 Smith Map of Cuba, Puerto Rico, and the Philippines

America's emergence as a colonizing power!

This is an 1898 John L. Smith persuasive map celebrating the U.S. conquest of Cuba, Puerto Rico, and the Philippines during the Spanish-American War. Cuba is the primary focus of the map, with impressive detail naming cities, towns, railroads, and coastal points and bays are labeled throughout. An inset of the Philippine Islands occupies the upper right corner, with a sub-inset of Manila Bay, where Admiral Dewey won his celebrated victory against the Spanish Navy. A second inset to the left of the Philippines details Puerto Rico (Porto Rico), while a third, still smaller inset situates these three new territories on a world map. Insets along the bottom detail the city of Havana, the Province of Havana, and the West Indies from Cuba to Granada.

An Analysis of the map

With this map, Smith lionizes the territorial gains of the United States as a result of the Spanish-American War to the American people. Smith promotes the positives of these new adventures, particularly with regard to the potential riches awaiting the U.S. in Cuba. A text in the lower right corner highlights Cuba's natural bounty, including its robust production of tobacco and sugar, its unforested wilderness, and its mild, welcoming climate. Smith also cites Cuba's succession of uprisings against corrupt Spanish Captains-General as evidence that the Cubans wanted freedom. Ironically, Cuba becoming a 'colony' of the United States doesn't seem to be granting the Cubans freedom, at least in a modern sense.

The United States as a World Power

Although this is not blatantly stated here, Smith also implies the elevation of American stature on the world stage, because the U.S. now has 'colonies' - at the time considered essential for any country to be considered a 'player' on the world stage. With these new colonies, the United States joined European powers from whom the extent of their respective colonial empires was one measure of each power's greatness.

This map was created and published by John L. Smith in 1898. Two examples are catalogued in the OCLC as being part of the institutional collections at the New York Public Library and the Bibliothèque nationale de France, respectively.

John L. Smith (March 19, 1846 - April 1, 1921) was a Philadelphia based stationer, map seller, publisher, and printer active in the late 19th and early 20th centuries. Smith served in the Civil war with Company K, 118th Pennsylvania, the 'Corn Exchange Regiment' from roughly 1862. He served in the Battle of North Anna and Bethesda Church, where he was wounded. He mustered out of service in 1865 and settled in Philadelphia. Smith subsequently worked with Rufus L. Barnes (1794 - 1868), whose business he acquired in 1868. His offices were at 27 South Sixth Street, Philadelphia. He retired from the map business in 1920. Smith rose to prominence and wealth and, when he died, left a large estate of 54,500 USD to charity. He had no children and lived as a bachelor at the Columbia Club, 1600 North Broad Street, until his death of a heart attack in 1921. He had a brother, William C. Smith, who survived him. Learn More...