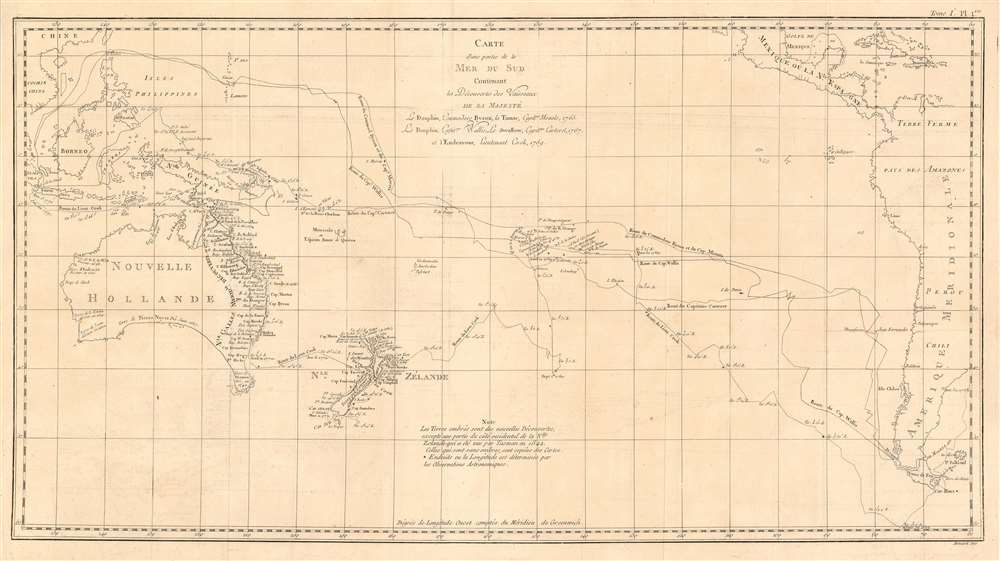 The Pacific Voyages of Three Great English Circumnavigators of the 18th century
$950.00

This is a 1774 map of the South Pacific Ocean, comparing the routes taken during three great circumnavigations of the 18th century: Byron and Mouat's 1763 journey aboard HMS Dolphin and Tamar; the 1767 circumnavigation of Wallis and Carteret aboard HMS Dolphin and the Swallow; and the 1769 voyage of the Endeavor under then - Lieutenant James Cook. To the East, the map shows the coasts of southern Mexico, part of the Caribbean islands, Central America and South America, including Tierra del Fuego and the Falklands. The western extremes of the map include part of China, Cochinchina, and the East Indies as far as Sumatra. Revealed in the ocean between are the late discoveries in the South Pacific, especially those of Cook, which provided the first detailed charting of Australia and New Zealand since Tasman's 1642 voyage.

The earliest of the three Pacific crossings charted here is shown leaving the Straits of Magellan, beginning to bend westward after passing the Juan Fernández Archipelago. Byron's flotilla passed north of the Society Islands, and would reach Tinian in the Northern Marianas before continuing to the Philippines and the Sunda Strait.

Starting at the Straits of Magellan, the tracks of the Dolphin and the Swallow diverge: as they entered the Pacific, strong winds separated the two ships and they would never rejoin. Carteret took the Swallow northward to the Juan Fernández Archipelago, where he had sailed under Byron two years prior. After resupplying and effecting ship repairs at Mas Afuéra, Carteret sailed west in a journey characterized mainly by scurvy and unfriendly natives. More than half his crew died on the voyage. Wallis’s route would take HMS Dolphin to the Society Islands, occasioning the first European encounter with Tahiti: Wallis and company were much more warmly received there than was Carteret at his ports of call. Whereas Carteret would parallel the first part of Byron's Pacific voyage, Wallis' track joined it later, at Tinian. His return voyage was less deadly than that of his fellow-captain. Having stocked the Dolphin with sauerkraut, Wallis' crew suffered no scurvy.

The great explorer Cook's first Pacific voyage, undertaken in order to observe the 1769 transit of Venus from Tahiti, diverged sharply from its precursors. Cook took Endeavor through the Strait of Le Maire, rather than that of Magellan, and sailed southwest to sixty degrees latitude south after rounding Cape Horn - this, in order to find evidence of the legendary Terra Australis Incognita. Finding none, Cook then sailed northwest, reaching Tahiti well before his June deadline for his observation of Venus.

Among Cook's observations on Tahiti was that of the rampant venereal disease on the island, which had not been evident during HMS Dolphin's 1767 visit. Captain Wallis would later deny the blame for this affliction, laying it rather at the feet of the French: Bougainville, specifically.

In August of 1769, Cook sailed into the virtually uncharted south; he would encounter and claim for Great Britain the islands of Huahine, Borabora and Raiatea. Endeavour reached New Zealand in September: Cook and his crew were the second Europeans to visit there, following Tasman's visit in 1642. Cook and his crew spent six months charting the coast, before continnuing westward. across open sea. In April 1770 they reached the east coast of Australia, being the first Europeans to do so. The chart shows the expedition's progress northward along the Australian coastline, eventually reaching Batavia in the Dutch East Indies in October.

This map was engraved by Robert Bénard for the 1774 French edition of James Hawkesworth's Relation des voyages entrepris par ordre de Sa Majeste britannique actuellement regnante, an account of Cook's voyages. The separate engraving appears to be neglected by institutional collections, appearing only in the Bibliotheque National and the National Library of Australia. The full text is well represented in institutional collections.