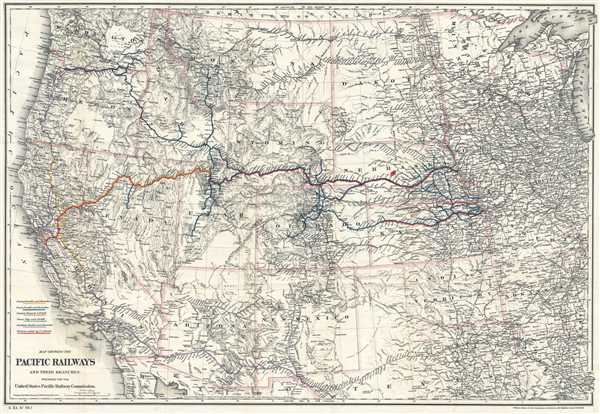 A detailed map that was prepared for the United States Pacific Railway Commission.
$675.00

This is an 1887 George Washington and Charles B. Colton railroad map of the western United States. The map depicts the western United States from the Pacific Ocean to Lake Superior, Lake Michigan, Illinois, Kentucky, Tennessee, Mississippi, and Louisiana and from Canada to Texas and Mexico. Created for the United States Pacific Railway Commission, all the railroads in this portion of the country are illustrated. Five of these railroads are highlighted through the use of different colors, these are: The Central Pacific (yellow), the Union Pacific (blue), the Central Branch of the Union Pacific (brown), the Sioux City and Pacific (teal), and the Southern Pacific (purple). The sections of these lines that were constructed with help from U.S. bonds are also illustrated in red, which is mostly the main transcontinental line from Omaha, Nebraska to San Jose, California. Other railroad lines are illustrated as well, such as the Northern Pacific, and innumerable other smaller railroads. Myriad cities and towns are labeled along all of the railroad lines, along with rivers, lakes, and mountains.

The United States Pacific Railway Commission was created by an act of Congress to investigate the affairs of the Pacific railroad companies that had received federal aid. The act authorized President Grover Cleveland to appoint three commissioners, with the stated goal of looking into the controversy surrounding the amount and timing of the repayment to the government of the principal and interest of U.S. Pacific Railroad Bonds. The scope of the investigation 'included a history of these roads, their relations and indebtedness to the Government, and the question whether in the interest of the United States an extension of time for the performance of the obligations of said roads to the Government should be granted.'

This map was prepared by George Washington and Charles B. Colton for the United States Pacific Railway Commission and published in one of the Commission's reports in 1887.