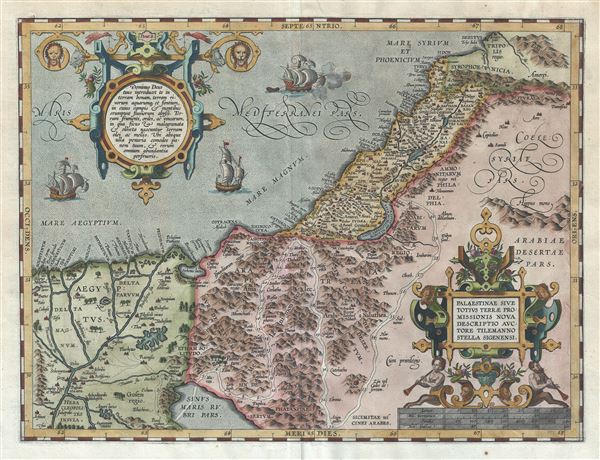 This is a scarce and beautiful 1584 map of Palestine, Israel or the Holy Land by Abraham Orteilus. It extends from Beirut (Berytus) to Egypt and the Nile Delta and south as far as the Red Sea. This map shows the course of the Israelites as they fled out of Egypt, across the Red Sea into Palestine.

The city of Ramesse is indicated as the starting point of the Biblical Exodus and the wandering of the Hebrews. We can follow their path into the desert and across the Red Sea following Moses' parting of the Red Sea. Now in the Sinai, we can follow the footsteps of the Hebrews to Mount Sinai (Mons Sinai) and their subsequent wanderings in the Sinai over the next forty years before migrating into the Promised Land by crossing the Jordan River just north of the Dead Sea. Forty one stations, each signifying a year of the Wandering, is noted throughout. Numerous Biblical sites are noted throughout.

A beautiful cartouche in the top left quadrant features a description of the region, while another beautifully engraved title cartouche adorns the lower right quadrant. This map was issued by Ortelius in his scarce 1584 issued of Theatrum Orbis Terrarium.