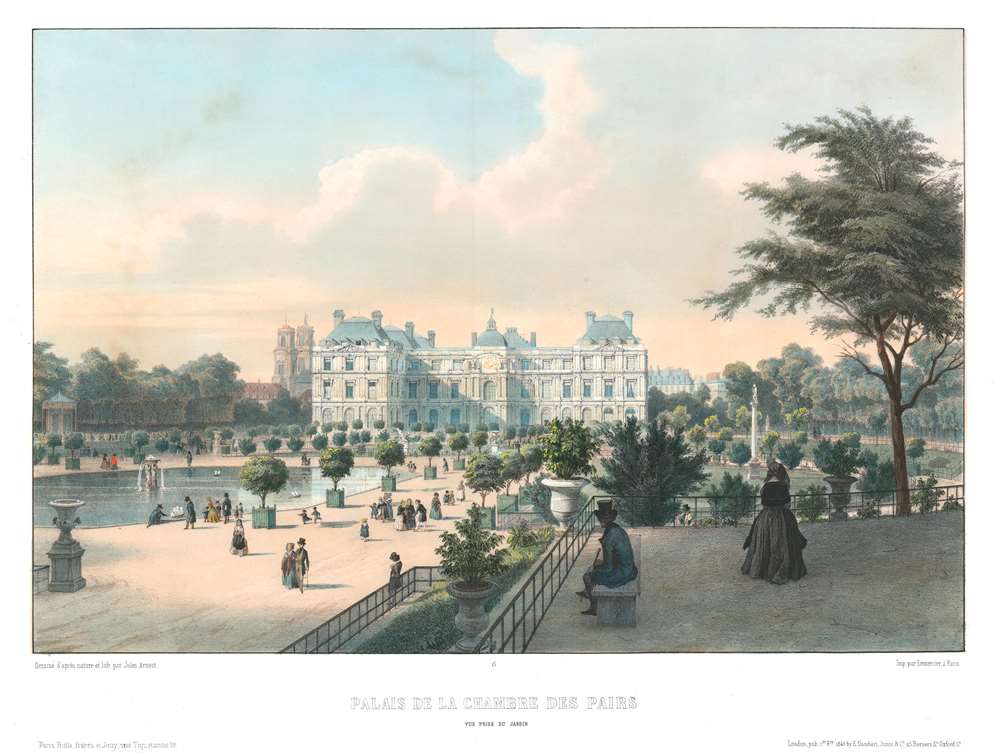 A beautiful 19th century view of the Jardin du Luxembourg and the Palais du Luxembourg - with families sailing ships on the basin just as they do today!
$200.00

This is an 1845 Jules Arnout view of the Palais du Luxembourg and the Jardin du Luxembourg in Paris, France. The view overlooks the park from the southeast, with the basin in the foreground and the Palais du Luxembourg, the seat of the French Senate, dominating the view and acting as the main focal point. Small trees and shrubs line the paths, and young boys and their families play with boats on the basin, just as children do to this day. The bell towers of the Saint-Sulpice Church can be seen in the background.

A Short History of the Garden

The garden and the palace got their names from the grounds of the manor house on which they are built. The hôtel du Luxembourg belonged to François de Piney-Luxembourg, who built the original manor house at one point before selling it to Marie de Médicis who decided to leave the Louvre. Marie de Médicis had a new palace built, she was a former Queen of France and Navarre following her husband's death she served as the King's Regent for her son. Marie de Médicis was also responsible for the construction of the first garden, which André Le Nôtre, the architect of the stunning gardens at Versailles, later renovated. After the death of Marie de Médicis in 1642, the palace and gardens changed hands multiple times, before becoming a prison during the French Revolution. After Napoleon's successful coup d'État, it became the seat of the Imperial Senate and the gardens were renovated. The gardens were redesigned during Haussmann's renovations of Paris, and, in more recent history, the palace housed the 3rd German Air Force during the Occupation and the garden, which was closed to the public, served as a parking lot for German military vehicles and artillery. After the liberation of Paris, the park and the palace became property of the French government.

This view was originally created by Jules Arnout, printed by the Lemercier firm, and published by Bulla Frères in Paris in 1842. The present example is a British edition that was imported and published by Ernest Gambart, Junin and Company in 1845. The only other known example of this view is an example of a black and white edition that is part of the collection at the Musée Carnavalet in Paris.


François Bulla (fl. c. 1814 - 1855) was a French engraver, printmaker, lithographer, and printer. Born in Tessin, Bulla opened his business at 98, Rue du Temple around 1814 and moved to 38, Rue Saint-Jacques in 1821. Bulla published a catalog of his work in 1838 entitled Catalogue général des estampes et lithographies compost le fond de F. Bulla, éditeur, quaint Saint-Michel, 25 that was printed by the Imprimerie de Ducessois. Bulla's business was described in the Bazar Parisien in 1826 in this manner:

In 1848, Bulla entered into a short-lived partnership with Cereghetti; he then moved on to a partnership with Stampa, a Spanish editor, in 1849. Bulla retired in 1855. Bulla had five sons: Eugène (known as Bulla ainé), Joseph, Antoine, Laurent, and Jean-Baptiste. All five of his sons would adopt their father's profession and become either editors or printers. His two oldest sons established their own firms. Antoine was sent by his father to Cadiz in 1849, but when François retired in 1855, Antoine took over his father's share of the partnership with Stampa. The firm still operates to this day in Rome, Italy and is owned by Bulla's descendants. Learn More...

Jean Joseph Ernest Theodore Gambart (October 12, 1814 - April 12, 1902) was a Belgian-born English art dealer and publisher who eventually grew to dominate the London art world in the mid-nineteenth century. Born in Kortrijk, Belgium, Gambert was the son of a bookseller, binder, and printer. He moved to Paris before he was nineteen and established his own print and papermaking business. He moved to London in 1840 to establish a branch there for the well-established print publishing company Goupil. In 1842 he established his own firm yet again, forming a partnership with a Mr. Junin, and their firm Gambart and Junin specialized in importing art prints from Europe. By 1844, the company had established itself as print publishers as well as importers and exporters. Gambart quickly became known as a leading art print publisher, and gained a reputation for fair and mutually beneficial agreements with artists. By 1849 Gambart expanded to include original works. Gambart was one of the first to establish an art gallery as they are recognized today, creating relationships between himself and artists and art buyers. Before his exhibitions at his gallery, art was generally sold directly from the artist to the buyer, who was often a patron. Gambart married three times but did not have any children. In 1846, he became a British subject. Gambert retired in 1870 and handed the business over to his nephew, Léon Henri Lefèvre,l who continued the business, and the Lefevre Gallery existed in London until 2002. Gambart moved to Nice with his third wife, whom he married when she was sixteen years old, and he died in 1902. Learn More...

Very good. Light soiling. Closed tear along bottom margin professionally repaired on verso. Blank on verso.
Looking for a high-resolution scan of this?